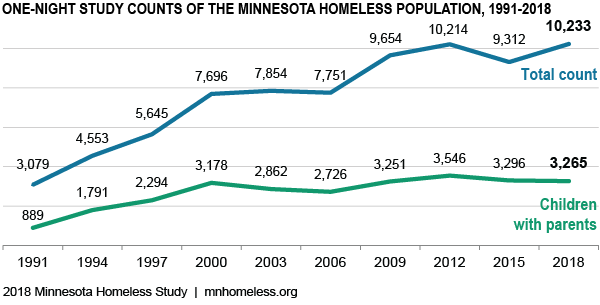 “Minnesota’s lack of affordable housing has ripple effects that impact every single one of us,” said MHP Executive Director Anne Mavity. “For thousands of Minnesotans, the effects are particularly devastating. Families, seniors, and individuals who are experiencing homelessness are bearing the brunt of our collective failure to adequately invest in affordable homes for all. We need all levels of government and private sector partners to step up and say, ‘Homelessness is not acceptable. Not in Minnesota. Not anywhere.’”

Homelessness impacts communities statewide and manifests differently from community to community. From 2015 to 2018, homelessness increased by nine percent in the 7-county Twin Cities metro and by 13 percent in Greater Minnesota. More than a quarter of people experiencing homelessness are not staying in a formal shelter – an increase of 62 percent from 2015. These individuals, families, and seniors reported staying in an encampment or on public transportation, doubling up, or hopping from couch to couch. That means homelessness is sometimes apparent. Other times, it’s invisible.

“The Hiawatha encampment that grew to more than 300 community members last fall drew national attention,” Mavity said. “Local organizations, officials, and neighbors responded swiftly, connecting people with resources and housing. So we know that we have public will to take action, and there is important work yet to do to. We’ll be a stronger Minnesota when we make the investments in housing that are necessary to prevent homelessness from happening in the first place.”

Wilder Research conducts their one-day statewide study every three years. In addition to the point-in-time count, the study includes interviews with people who meet a federal definition of homelessness. Future reports will analyze data collected through counts and interviews to provide deeper insight on homelessness among youth, Veterans, older adults, and more. In addition, a separate report will feature findings from interviews conducted in partnership with six of Minnesota’s Native American tribes.