Anyone who cooks from scratch knows the implications of that daily activity on kitchen spaces, the cook, and the family: the mess that has to be cleaned, the amount of food, utensils, and other items that have to be stored, the steam and smells generated that can overtake the rest of the house. At the same time, ending the day with a delicious meal accompanied by lively family conversations around the table can be priceless. It fosters connections with family members, transfers healthy eating habits to the younger generations, and helps craft meaning and memories. The question that confronts designers and planners of housing is how can peoples’ efforts to create meaning in their lives be supported at a time when we all speak, cook, eat, sleep, socialize, pray, dress, etc. in so many different ways?

Designers are often asked to design houses that can be the home for a specific family in the city or the countryside, houses that a developer can duplicate in a suburb, or houses for families in public assistance, such as affordable housing. In many of these cases, designers are not dealing with a specific client who will relate that family’s needs and priorities to them. Instead, they often have to respond to market trends or their own assumptions of what a house should look like. This approach can be problematic, particularly since in the past few decades, the demographic landscape of Minnesota has changed and many new immigrant groups have joined long-standing minority groups in calling Minnesota home.

Housing characteristics, such as ventilation systems, window types, spatial layouts, and material selections can impact residents’ ability to practice traditions that foster health and well-being. Let’s take for example the activities of cooking nutritious foods in a safe manner and eating together as a family: 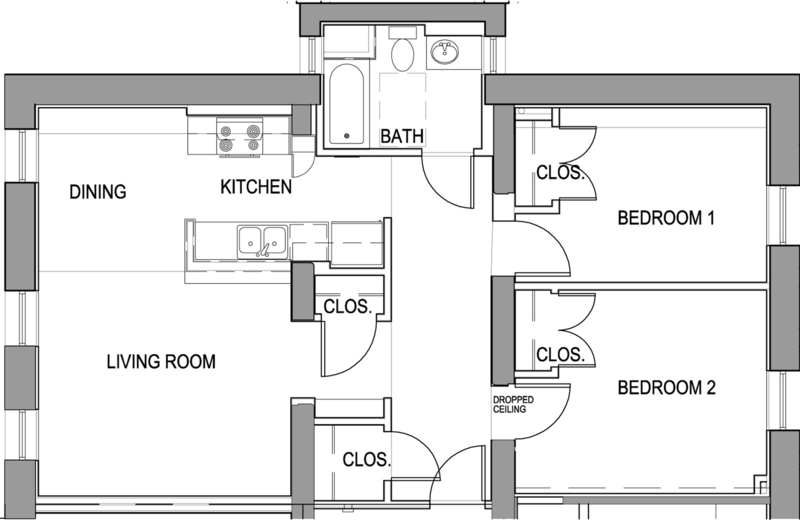 Designers who are cognizant of diverse uses of home spaces can implement culturally sensitive design solutions. In Ripley Gardens in Minneapolis, affordable housing developer Aeon designed kitchens that can be easily adjusted to enable a Muslim woman to cook without wearing her veil and without being seen (pictured left). A curtain could be hung to screen the kitchen and even the dining area from the living area of the home, the space where men would likely socialize. Such an alteration is low cost as it does not involve having to move the sink or the stove or even building walls. In this design, a veiled woman would also be able to access the bedrooms and bathroom without having to pass by the living area, easing her life and caretaking responsibilities.

Because of their emphasis on diversity, adaptability, and flexibility, culturally sensitive housing designs have economic and environmental benefits: they have a greater appeal to a larger market share, can be occupied for longer periods of time, and can minimize environmentally and financially costly renovations, conserving resources in the process. With housing choices that respond to diverse ways of living, Minnesota can be more attractive to a broader segment of the population, strengthening the region’s cultural and economic vitality and positioning Minnesota’s global competitiveness. Furthermore, although Minnesota is one of the healthiest states in the nation, it has some of the greatest disparities in health status and incidence of chronic disease between Populations of Color / American Indians and Whites. Occurrences of physical health concerns, such as obesity, diabetes, and heart disease as well as mental health inequalities, abound among Minnesota’s minority and immigrant groups. By supporting diverse ways of living, culturally sensitive housing can play a role in alleviating some of these disparities.

Part of the challenge in working toward culturally sensitive housing is “unlearning” the standard and typical approach to
planning a residential project. Designers and planners who recognize the many ways by which people chose to live their lives can devote time and energy to revisiting guidelines and regulations for cultural sensitivity. Building synergies among all stakeholders is another integral part of the process, and more areas of collaboration and networking as well as sharing of best practices should be nurtured. One thing is certain: housing that supports various ways of living can facilitate healthy lifestyles and improve the health and well-being of everyone in our communities.

Tasoulla Hadjiyanni is an Associate Professor in Interior Design at the University of Minnesota. Her work includes exploring how the design of interior spaces intersects with culture and identity through the experiences of new immigrant and minority groups in Minnesota. Her approach to culturally sensitive housing designs has appeared in leading journals and conferences.