10/23/2014: Homes for All Alliance Celebrates Better Housing for 4,000 Minnesota Households

CONGRATULATIONS HOMES FOR ALL ADVOCATES!

The bonding bill includes $100 million in bonds for housing, which will provide a stronger foundation for thousands of Minnesotans and the communities where they live.

Home is the foundation.

For a ribbon cutting postcard customizable for your own organizational contacts, This email address is being protected from spambots. You need JavaScript enabled to view it..

Legislators listen to what citizens have to say. Send a letter to the editor of your local to support Homes for All! A partial list of newspapers is below, and talking points are below at right. 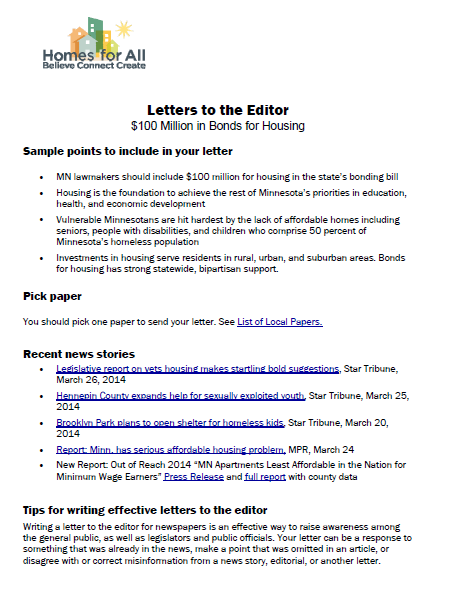 Homes for All includes the following organizations.

Homes for All is now over 100 organizations strong . . . and growing!


Homes for All in the media

Includes articles mentioning Homes for All or its specific legislative asks.

To give schoolchildren a leg up, start with some housing, Minnpost, 4/28/14

Community developers' group is part of a coaltion for affordable homes, Peter Bartz-Gallagher, Politics in Minnesota, 2/12/2014

A focus on homelessness will pay off for state, Editorial Board, Star Tribune, 1/10/2014