This summer, the U.S. House and the Senate Appropriations Committee has each passed a Fiscal Year 2016 Transportation, Housing and Urban Development (THUD) bill that severely under-funds needed housing programs. Both bodies were forced to make drastic cuts in order to to adhere to the 2011 Budget Control Act spending caps. 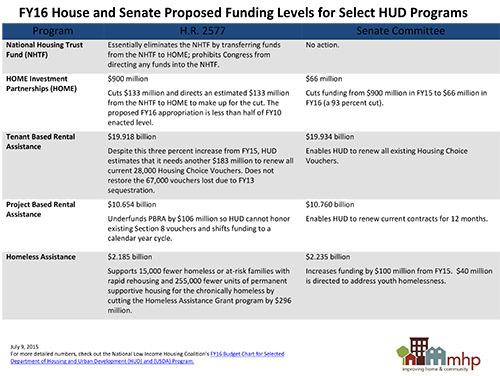 Click on the chart to see detailed House and Senate proposed funding for select HUD programs. Read below for more analysis and policy updates in the two bills.

On June 9, the House approved, by a 216 to 210 vote, its THUD FY16 funding bill (H.R. 2577). The bill provides $42 billion for HUD, which is $1 billion above the FY15 enacted level but $3 billion less than the President requested in his budget. The House Appropriations Chairman Hal Rogers (R-KY) believes the bill “provides responsible levels of funding for core housing programs” and cuts waste.

The bill is a disaster for advocates of the National Housing Trust Fund (NHTF) and extremely low-income households since it transfers all funding set aside for the NHTF – to the HOME program and prohibits Congress from directing funds to NHTF in the future. This transfer of funds to HOME makes up for a cut to HOME.

Despite funding increases to tenant and project based rental assistance, the House bill still under-funds these programs given the actual costs of running these programs. Under the proposed budget, HUD would not be able to renew all existing Housing Choice (Section 8) Vouchers. Congressman Keith Ellison remarked:

The resources provided in the bill make it impossible to address the needs of low-income working families, people with disabilities and the elderly. It provides too little to serve families that currently receive housing assistance and no new resources for the millions of low-income families paying more than half of their income for rent and utilities.

A White House statement opposed the bill citing that “only one in four families who are eligible for housing assistance actually receives it” and that the bill would set back efforts to end homelessness. Senior advisers to the President have already advised him to veto H.R. 2577 if it crosses his desk.

The House bill also includes several provisions that threaten fair housing. The bill prevents HUD from implementing, administering, or enforcing the just released Affirmatively Furthering Fair Housing (AFFH) rule. The AFFH rule is meant to help communities advance housing opportunities, overcome patterns of segregation, and improve coordinated public investments in areas of highly concentrated poverty. The bill prohibits HUD from using funds to implement, administer or enforce the disparate impact standards of the Fair Housing Act. Under the House bill, HUD would not be able to help victims of polices that produce disproportionate adverse impact against any group based on race, national origin, color, religion, sex, familial status, or disability.

On June 27, the Senate Appropriations Committee passed its THUD FY16 spending bill in a 20 to 10 vote. While the Senate did not raid the NHTF, it did cut the HOME program by 93 percent. Chair Collins (R-ME) defended the committee’s allocation priorities by stating that the cuts to HOME, which in her opinion is troubled with “misuse” and “fraud,” were necessary, in light of mandated sequestration spending caps, to maintain funding for rental assistance programs.

The HOME program is the largest federal block grant to states and localities to fund a range of activities including development of affordable housing for rent or homeownership and direct rental assistance to low-income people. HUD awarded grantees in Minnesota $14.3 million in HOME funds in 2014. Assuming Minnesota grantees were to receive the same share in FY16, Minnesota grantees would only receive a little over $1 million, less than Hennepin County alone received in FY13. Duluth, which received $544,482 in FY15, would only receive $39,928, less than the cost to construct one unit of housing.

The Senate also expands the Moving to Work (MTW) demonstration program from 39 to 339 public housing authorities (PHAs). Many advocates are concerned by this proposal because participating PHAs can impose rent structures that are not income targeted, choose not to assist any new extremely low income households, implement work requirements, and shift funds between the public housing and voucher programs without a requirement to serve the same number of households. The Senate would also expand the Rental Demonstration (RAD) cap from 185,000 units to 200,000 units.

The Senate, like the House, reduces the frequency of income re-certifications for certain HUD rent-assisted households when fixed-income sources make up at least 90% of their income. Re-certifications would occur every three years, instead of annually.

What you can do

MHP will continue monitoring HUD’s FY16 budget. Look for updates and analysis throughout the year. In the interim, July and August are excellent months to schedule in-district meetings with your elected officials. Urge your congressional delegates to repeal sequestration, protect the NHTF and HOME programs, and ensure the integrity of the Fair Housing Act.