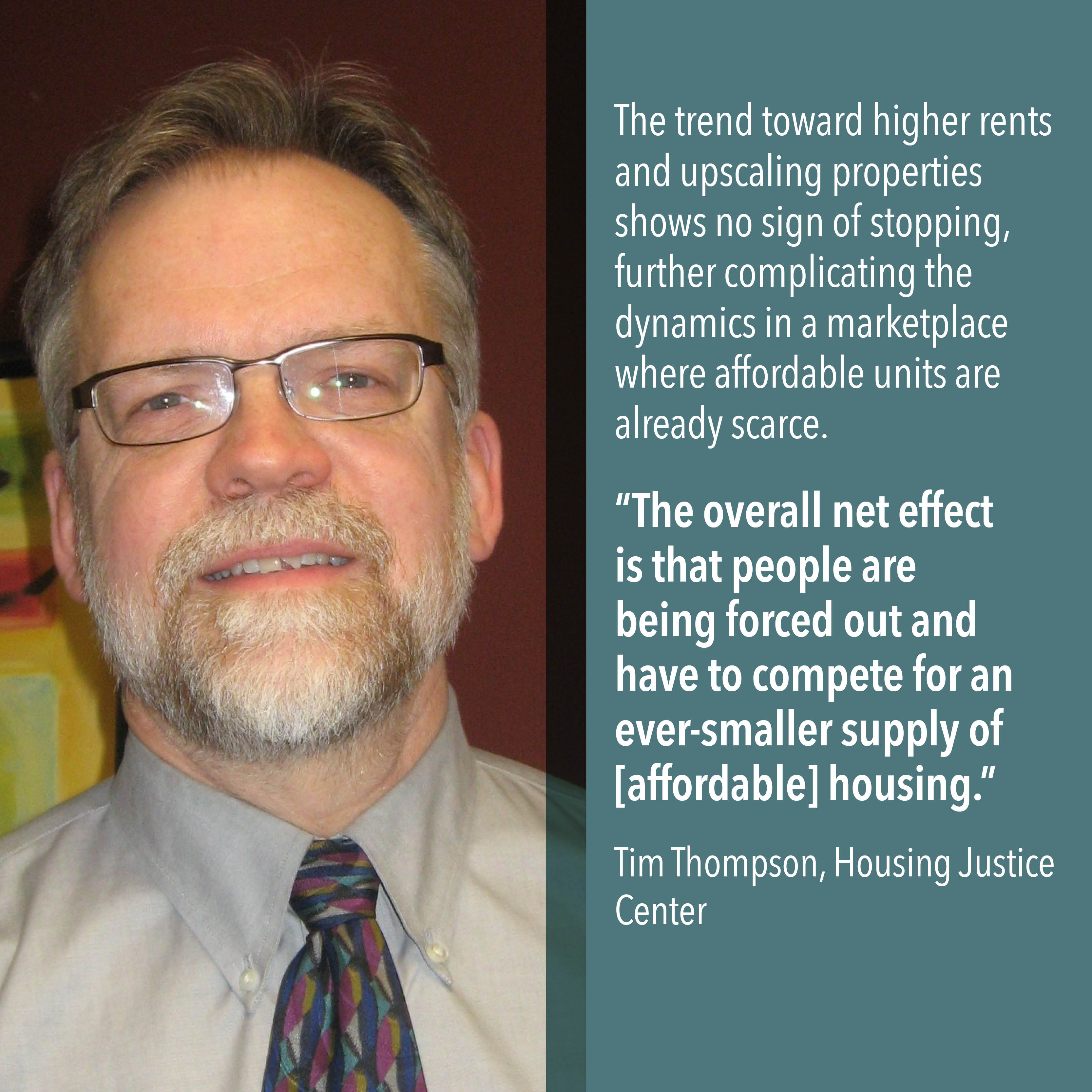 For residents of Crossroads at Penn in Richfield, a new owner and the complex’s subsequent rebranding as “Concierge Apartments,” meant embarking on a challenging search to find a new housing. Over a year ago, Tim Thompson of the Housing Justice Center decided to step in on behalf of those tenants. Thompson shared his story in MHP’s recently-released Sold Out report, which analyzes the pace, price, and location of apartment property sales in the Twin Cities metro region—and which reveals troubling trends for low- to moderate- income renters in a hot rental market.

Thompson’s story was reported by…

Tim Thompson got the call more than a year ago, soon after a new owner took over the 698- unit Crossroads at Penn apartment complex in Richfield.

For him, the policy changes and rent hikes mapped out by the landlord represented a call to action. Thompson, an attorney who heads the St. Paulbased Housing Justice Center, spearheaded an effort to bring a new kind of attention to the problem by heading to court.

On behalf of tenants facing displacement, and in some cases homelessness, Thompson filed a first-of-its kind lawsuit accusing the Crossroads purchaser of flouting the Fair Housing Act.

The landlord’s overhaul, the suit says, is designed to unfairly push out existing tenants — a disproportionate number of which are people of color or those with disabilities, both protected from discrimination under the federal law.

Typically, the Fair Housing Act comes into play in zoning disputes. But shifting market dynamics that increasingly threaten to displace low income renters add a new wrinkle. Thompson, a longtime affordable housing advocate in the Twin Cities, leveraged the law as part of a push to ease the purchaser’s dramatic changes.

“It has been applied in situations involving private landlords in some cases, but a case where we are essentially arguing that there is a less discriminatory business model available to an owner to accomplish their goals without displacing everyone is pretty unique,” Thompson said.

A federal judge refused to dismiss the suit this summer, a significant win for tenants at risk of losing their home at a time when they badly needed a boost. Over the past year in particular, Thompson said, out-of-state investors have dramatically changed the Twin Cities multifamily landscape.

The trend toward higher rents and upscale properties shows no sign of stopping, at least in the foreseeable future. That further complicates the dynamics in a marketplace where affordable units are already scarce.

“So far, it seems to be continuing unabated,” Thompson said. “The overall net effect is that people are being forced out and have to end up competing for an ever-smaller supply of this kind of housing.”

Several Crossroads residents have rallied around the fair housing case, showing up in court and sharing their stories with local policymakers. “When these things happen, rather than simply take a defeatist attitude, they are really interested in the things they can do to save their homes,” Thompson said.