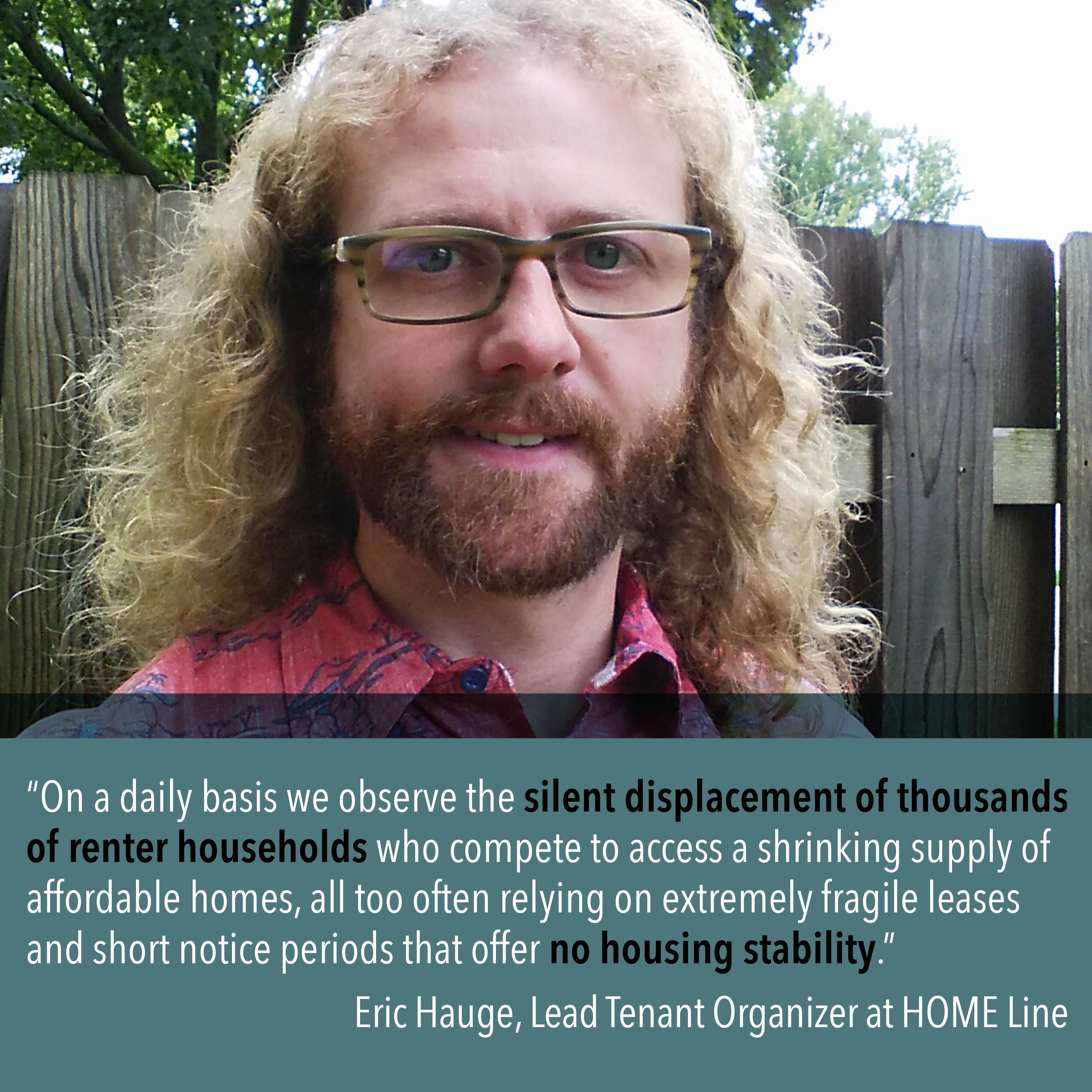 This month, MHP released a new report that examines the pace, price and locations of more than 1,000 apartment property sales in the seven-county metro region. The findings are clear: Over the past decade, renters at low- to moderate- income levels have had an increasingly difficult time finding affordable housing. The report includes the experiences of both renters and leaders advocating for change. Karlee Weinmann spoke with Eric Hauge, lead tenant organizer at HOME Line.

Eric Hauge’s phone has been ringing a lot lately.

But that’s to be expected for an organizer at HOME Line, a tenant advocacy group at the center of a burgeoning Twin Cities housing crisis. When property owners’ new plans force out existing tenants, many of them turn to HOME Line for support as they venture out into the increasingly challenging rental market.

It’s tough to imagine a fair fight between property owners and under-resourced tenants. Still, Hauge and his group have worked consistently for months to shift the power balance toward renters. But that’s a tall order when hundreds of tenants — and counting — face displacement.

Between two complexes that changed ownership within the past year, in Richfield and St. Louis Park, Hauge and HOME Line fielded calls from dozens and dozens of tenants facing an uncertain hunt for new housing. It’s happening faster than advocates can handle, he said, and more frequently than ever.

In large part, HOME Line’s approach has focused on empowering renters to organize themselves and advocate for their individual homes. The organization was instrumental in mobilizing Crossroads residents around their Fair Housing Act lawsuit, and has been an active participant in housing resource fairs in communities hit by influxes of displaced renters.

Thinking bigger, Hauge and HOME Line are looking for a stronger platform to galvanize community members around the issue. That grassroots-level push is central to his strategy for solving a problem that has so far struggled to capture widespread attention.

A lasting fix remains elusive given the expansive nature of the issue. “The problem is that [the affected rental units] are all over the metro area,” Hauge said. “Cities have different policies and interests and a lot of them just don’t even recognize this as a problem.”

Plus, he said, not every case sparks the kind of lightning-rod debate that has thrust some apartment sales — notably, the Crossroads at Penn complex [in Richfield] and Meadowbrook Manor [in St. Louis Park] — into news reports and community conversations. Many residents quietly leave when they can’t find the help they need to fight for their homes. That group, organizers say, is large but impossible to quantify.