On February 22, U.S. Representative Erik Paulsen met with housing advocates, providers, and a formerly homeless young man to discuss an issue facing too many homeless students in Minnesota.  This troubling issue stems from an unintended consequence of a well intended rule in the Low Income Housing Tax Credit program.

The Low Income Housing Tax Credit (LIHTC), established in 1986, is responsible for most of the affordable rental housing produced nationwide, including some properties that house formerly homeless youth. To prevent LIHTC properties from being used as college dormitories, legislators enacted the “Student Rule,” which stipulates that full time students cannot live in a LIHTC low-income unit as head of the household. While this seemingly common sense rule was meant to prevent precious resources from being used for college dormitories, the Student Rule also prevents formerly homeless students living in LIHTC units from attending high school or college full time. 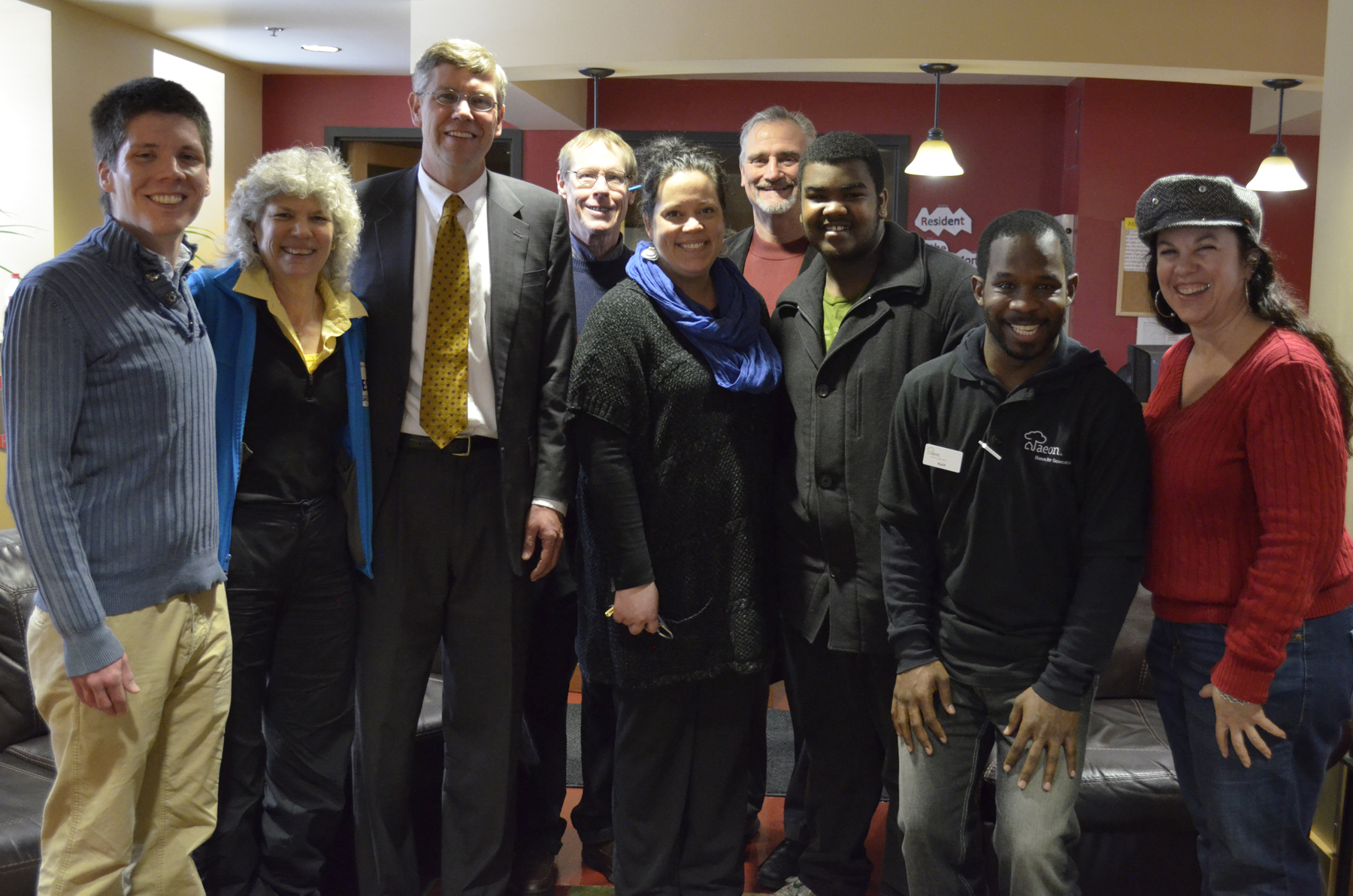 Students therefore find themselves choosing between dropping to part time student status, and taking advantage of safe, affordable housing, or attending school full time but remaining homeless.  One such student, Jordan, a resident of Archdale Apartments, told Rep. Paulsen that he chose safe, affordable housing over full time status, even if that meant delaying his graduation by an entire year.

Sara Armstrong-Nathan, the site manager for both St. Barnabas and Archdale, the two Aeon properties for formerly homeless youth, and Sue Pohl, the Site-based Housing Coordinator for YouthLink, told Rep. Paulsen that too many Aeon residents have to make the difficult decision between safe, affordable housing and full time school. “Telling residents that they have to make this choice is the most difficult part of my job,” said Armstrong-Nathan.

Students who choose part time school over homelessness also face other obstacles, including educational programs and scholarships that do not accommodate part time enrollment.

After the meeting, the property manager took Rep. Paulsen on a tour of St. Barnabas, the newer of the two Aeon properties for youth.  Rep. Paulsen was able to see its amenities and services, including a 24 hour front desk, a case management office, and a workout room.

Housing advocates, including MHP staff, have been working for years to try to fix this troubling issue. Despite support from across the political spectrum for making the changes necessary to the Student Rule, the legislation would need to be included for passage as part of a larger tax bill package. Since tax legislation nearly always creates a political battle in Congress, successful passage of this small, but important, change has eluded advocates for years.

“Education provides a brighter future for these youth,” said Pohl. “Many of these students are the first in their families to have a chance of graduating from high school.”

Rep. Paulsen is expected to introduce an amendment to create an exception in the Student Rule for homeless youth. This would ensure brighter futures for more homeless, and formerly homeless, youth across the country.