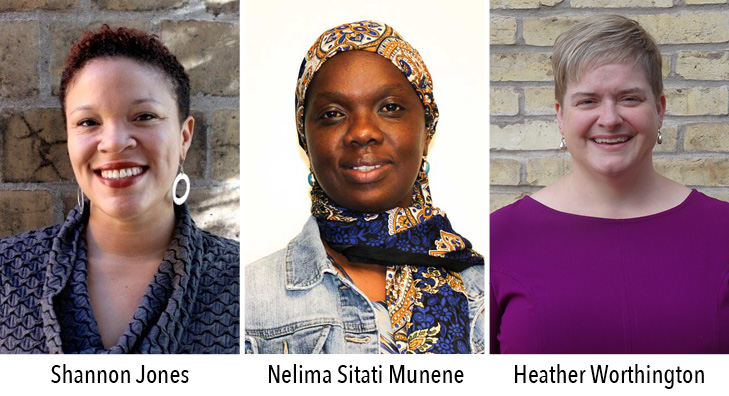 Fifty years since the passage of the federal Fair Housing Act, deep and growing housing inequities remain a persistent and urgent challenge in our communities. Over the course of several months, the “Racism, Rent and Real Estate” event series explored the history of racial discrimination and segregation in housing in Minneapolis and Hennepin County. In the final event, we pivoted to the future: How do we not only recognize but reverse the legacy of systemic racial discrimination and reframe solutions that both repair harm and meet community-identified needs?

Building wealth is still deeply tied to homeownership — and white families have no difficulty accessing that resource.

“For white people, fair housing is a concept that we very much take from granted,” Heather Worthington, Director of Long Range Planning at the City of Minneapolis, started. “My family was always able to secure a loan and buy property and my ancestors did the same for probably a couple hundred years. So my concept is different than that of many Americans, particularly people of color and especially for low-income people. So I think our idea of fair housing needs to change in this country. We need to think differently about how we redress, how we fix those systems that created disparities that are still deep and deepening in this community… Context is important in thinking about how you achieved your homeownership or how you utilized your privilege to buy a home or nicer home. On a personal level, I bought my house 20 years ago, and it has tripled in value. So my investment has realized incredible gain, and I didn’t have to do much in that time but have the access. So homeownership is a huge part of wealth building and we need to think more expansively about how we redress those disparities in our community.”

For people of color, the choices are untenable — sacrifice community or sacrifice wealth.

“Currently if you’re a person of color and choose to live in a community that is majority people of color, you’re not able to build that same wealth,” Shannon Jones, Executive Director of Hope Community, explained. “I choose to stay in North Minneapolis, and in choosing that, I’m choosing to not build as much wealth because my home won’t appreciate in value like it would in a white neighborhood. I could pick up and move to other part of city and my home would triple in value, so my home is not fair housing because, based on the land where it sits and the neighbors that I have, I don’t have the same opportunity to build the wealth that I would if I were living in a white neighborhood. And if I lived in that white neighborhood and the pattern started changing and it tipped with too many people of color the value I would have gained in that house I would lose. Fair housing would even that playing field.”

Places aren’t discriminated against, people are. So integration isn’t the solution. Neither is deconcentrating poverty.

“A big part of the solution that’s been pushed for a long time is integration: Let’s just integrate people of color and make sure people of color can live in white neighborhoods,” Nelima Sitati Munene, Executive Director of ACER, said. “But that narrative means that, as a person of color, the only way I can have success or access to decent housing is to live in close proximity to white people. We talk about places being discriminated against, but it’s people who are discriminated against. We know statistically that the moment an area has more than 30% people of color, you see white flight begin to occur and both public and private disinvestment… We also talk about concentration of poverty and think if we just deconcentrate the poverty, everything will be fine. We talk about scattering us around instead of saying, ‘How do we really lift people out of poverty?’ These narratives completely absolve the system of responsibility in really addressing the cause of the problem. Let’s be clear: this is a racial justice issue. Let’s solve for the real issue, which is racial discrimination.”

The myth of meritocracy is pervasive and the market will never provide solutions.

“One of the narratives is that people don’t have housing because they’re not working hard enough,” Jones said. “That’s really individualistic, and takes the burden off the system that created the problem in the first place. So we’re solving for the wrong thing… And then there’s the notion that we just need to build enough housing and we’ll have this trickle down economics and after a while we’ll have these old and raggedy properties that no one wants and we can move poor people into those homes. But it takes 50 years for those properties to lose their value and in the meantime we still have homeless people. When they’re talking about building up more density it’s usually [housing for households earning] 60% AMI or higher. But 30% of renters in Minneapolis live at 30% AMI or below, so we’re not building the housing we need; we’re really making sure people who already have wealth and access have better housing.”

“Housing is a fundamental human right, but right now housing is a market product, even though the market has proved over and over again that it’s not capable of repairing itself,” Sitati Munene said. “Right now there’s a very disturbing trend within the nonprofits and cities about coming up with market solutions. The market is incapable of providing fair housing to everybody and we need to abandon that market solution idea.”

Anti-displacement policies are imperative, before public investments push people out.

“We have transit challenges in this community that are significant enough that they’re blocking people from obtaining good paying jobs,” Worthington said. “This issue of disconnection between housing and transportation is a major issue facing this community… We know that the C and D [bus] lines will be transformative for North Minneapolis. But, where the train or [bus rapid transit] goes, so goes economic development dollars and private investment. So we need to be thinking about an anti-displacement policy… It shouldn’t be that we don’t invest in those areas so we don’t create gentrification, because then we won’t create any opportunity either. We need to figure out how to navigate that space.”

Current reinvestment strategies priorities those with resources, rather than people and place.

“When a community has been disinvested in, everything has been disinvested; the roads, schools, infrastructure, jobs, all of those things,” Jones explained. “And then we wait for a developer to be interested in it and give them tax breaks and dollars to develop because now we’ll have worthy businesses and nice houses. What if we invested in people and in place? What if we invested in the small business owners and work on those infrastructure challenges and educate our young people so they could grow and see themselves in those jobs that they don’t see themselves in now? Currently we’re always subsidizing and giving money to people that already have the money. We’re giving them Opportunity Zone incentives and LIHTC and tax breaks. The system is perpetuating itself, so the people who already have the power and the money continue to have the power and the money. So we have to change the way the system is designed.”

Many renters can pay a mortgage — we need more tools for homeownership.

“In Brooklyn Park right now we have low-income folks paying more in rent than homeowners are paying for mortgages,” Sitati Munene said. “We work with people who have been living in an apartment building for 10 years, paying $1,500 to $1,800 per month. They have the ability to pay a mortgage, but we’re not having that conversation. Why don’t we have tools to enable folks paying $1,800 for rent, when right next door a homeowner is paying $1,300 in a mortgage and is continuing to build equity in their homes?”

“The current conversation in Minneapolis really tends to focus on single family homeownership or low-income rental, which implies a wealthy person deserves a single family home while lower income people of color deserve a rental product,” Worthington added. “We’re not focused on lower cost single family homes or other products, like condos, co-ops or townhomes. Those are missing middle products that urban areas are not developing, and subsidies are needed to regain that ground.”

Policymakers and advocates need to reorient the focus from projects to people.

“Increasingly the question we’re asking ourselves in local government is not what are we doing but who are we doing this for?” Worthington explained. “That’s the essential lens we need to be looking through… Stable, clean, well-cared for quality housing is a basic human right and until we make that shift in thinking, it’s going to be difficult to have this conversation. The narrative is going to persist around who’s worthy — and that’s a false narrative.”

“We usually talk about affordable housing, but I like to talk about strategies that make housing affordable, whether that means lifting people out of poverty so they can afford whatever housing they would like, or investing in strategies allowing for multigenerational living, so families can live together and afford that housing,” Sitati-Munene emphasized. “I’m invested in ideas about how to make housing affordable and accessible instead of just talking about affordable housing.”

Reparations are essential to shifting an entrenched and ongoing injustice.

“The only word I wrote down was reparations,” Jones said. “Reparations for the past housing discrimination and what we’re still dealing with to this day. In this county, people of color have been extracted from and cut out from being able to build wealth, while another class of people — white people — have been able to build on that. I don’t know what it looks like and we are confined in our thinking… We have to be bold. We have to be brave. We have to push on this in all of the places we work and especially the places we worship… Small incremental changes will mean our grandkids and great grandkids will still be having this conversation. We need to create a system that is equitable.”

White people must be accountable

“It’s incumbent on every single white person to stand up and say this is not okay with me, this has to stop and be very intentional about how I spend my money, where I live, who I elect to public office,” Worthington said. “As a consumer and a citizen we have to think about equity in our daily life and take it on as an issue. Ultimately, we’re the ones who built and perpetuate these racist structures and we need to dismantle them. We’ve said to our friends of color the last 60 years, this is your work, because you’re the beneficiary of it. But the shame and fear that it’s created for us is not sustainable. It’s a cancer eating away at us in this community and we have to get at it. We have to challenge the progressive dissonance in this community. You cannot have yard sign that says ‘Black Lives Matter’ and live next door to someone with a sign that says ‘Don’t bulldoze my home.’ That doesn’t work.”

Watch a video of the full panel here.