A new report from the Minnesota Housing Partnership shows Twin Cities residents are being Sold Out of their homes as property buyers “cash in” on a hot market for apartment complexes.

Analyzing data for more than 1,000 apartment property sales in the Twin Cities region over the past decade, Sold Out examines the pace, price, location and impact of apartment property sales across the seven-county metropolitan area. The key take-away: Both population and economic trends are driving a dramatic uptick in sales — and possible widespread displacement through rising rents and tightened tenant requirements.

“Last year, many of us were outraged when the Crossroads at Penn was sold and the purchaser raised rents, displacing more than 1,000 residents who had created a tight-knit community at the Richfield complex,” said Chip Halbach, Executive Director of the Minnesota Housing Partnership. “In creating Sold Out we wanted to better understand the breadth of the changes occurring in the region’s rental market. What we found confirms what we’re hearing from those being displaced now, and reveals a troubling trajectory that foreshadows a Twin Cities rental market that is unaffordable to so many families across so many communities.”

Major findings of the report include:

Sales of apartment properties are accelerating

Sales of apartment properties are accelerating 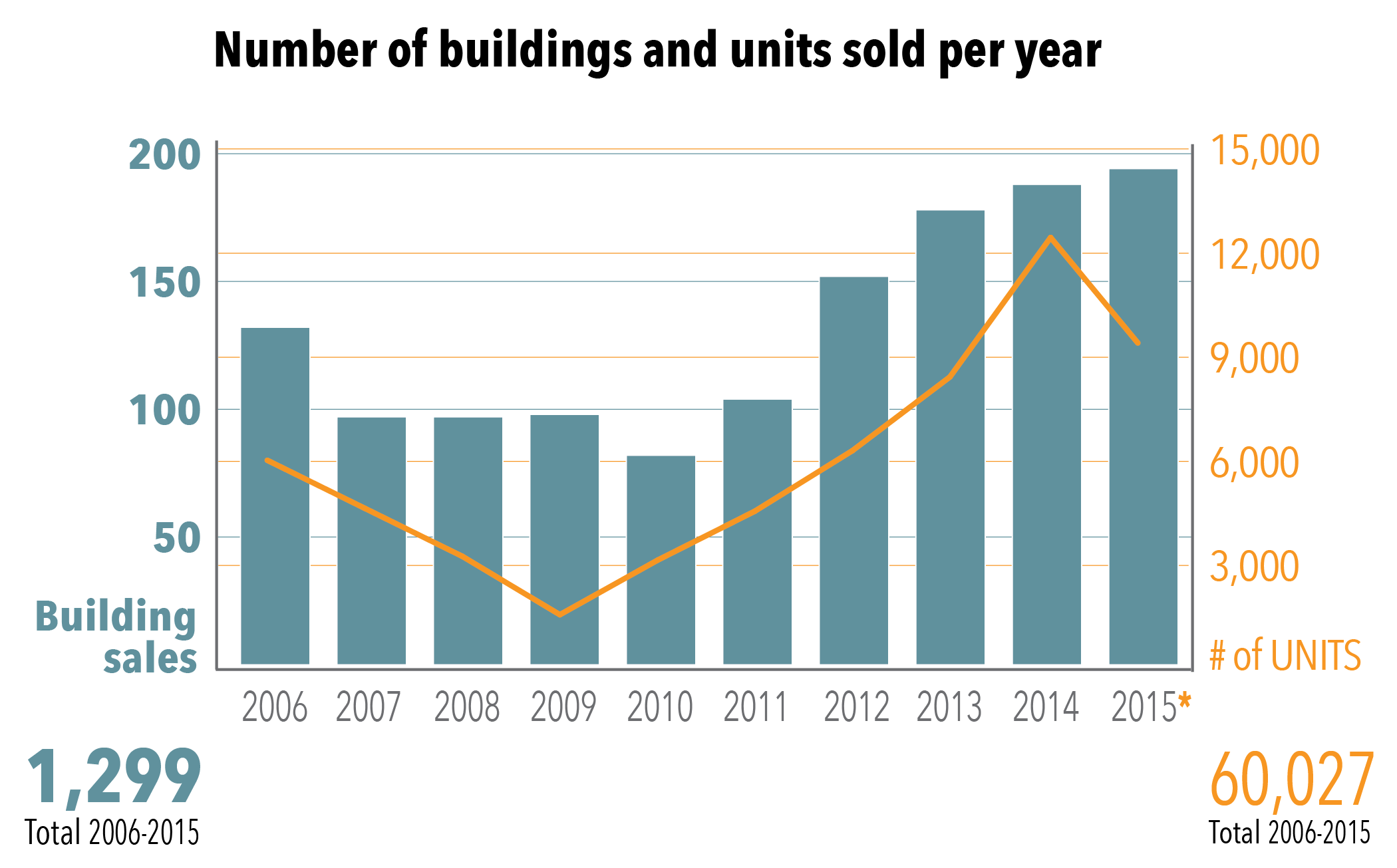 Sales of apartment properties are accelerating: Overall, 11 percent of the region’s rental housing stock was sold over the past five years. From 2014-2015, roughly 19,990 units of multifamily rental housing were sold — 147 percent higher than the number of units sold in 2010-2011. 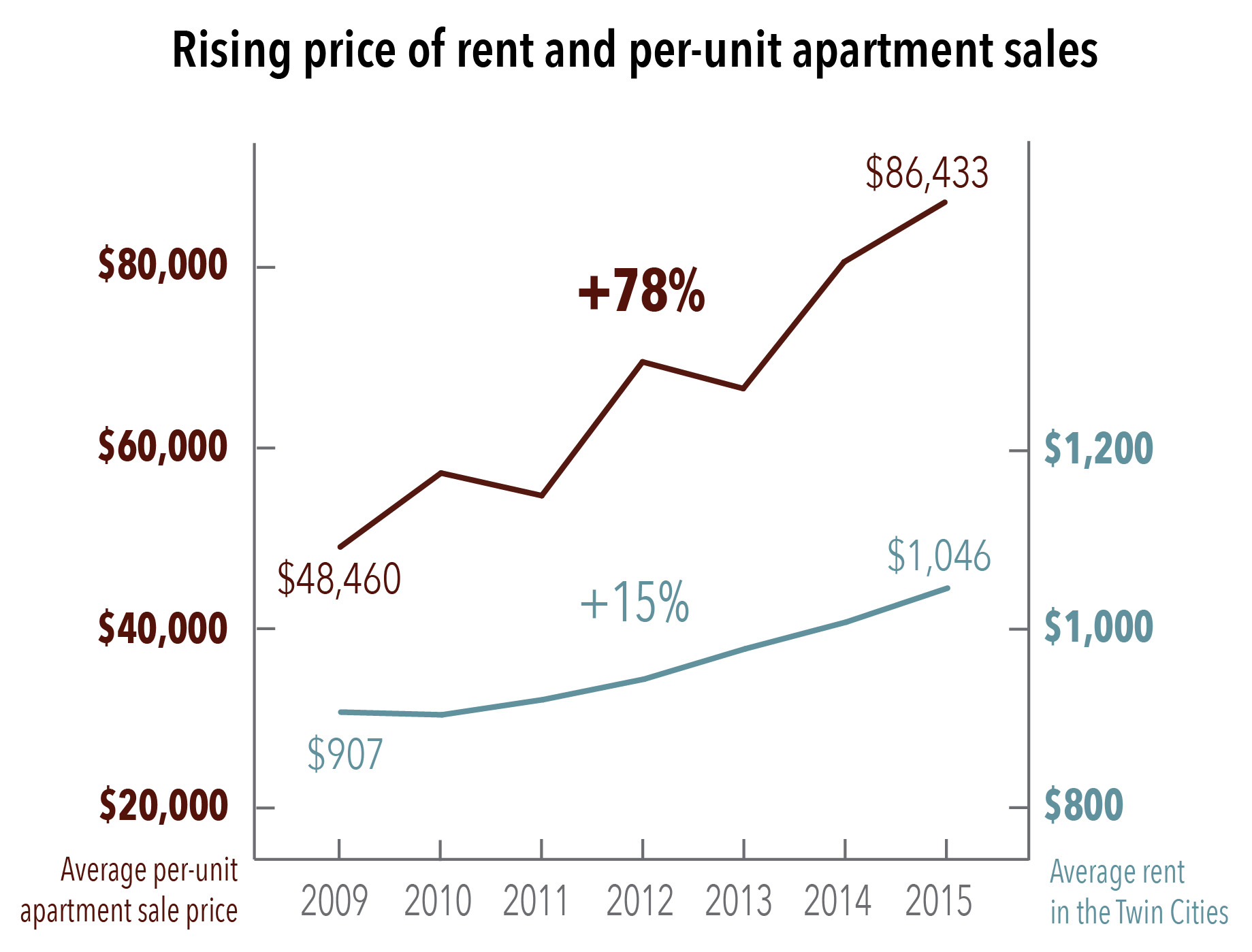 The sales price for apartment buildings has increased dramatically: Between 2010 and 2015, the average unit price in apartment properties sold increased by 54 percent, reaching $86,430 in 2015. 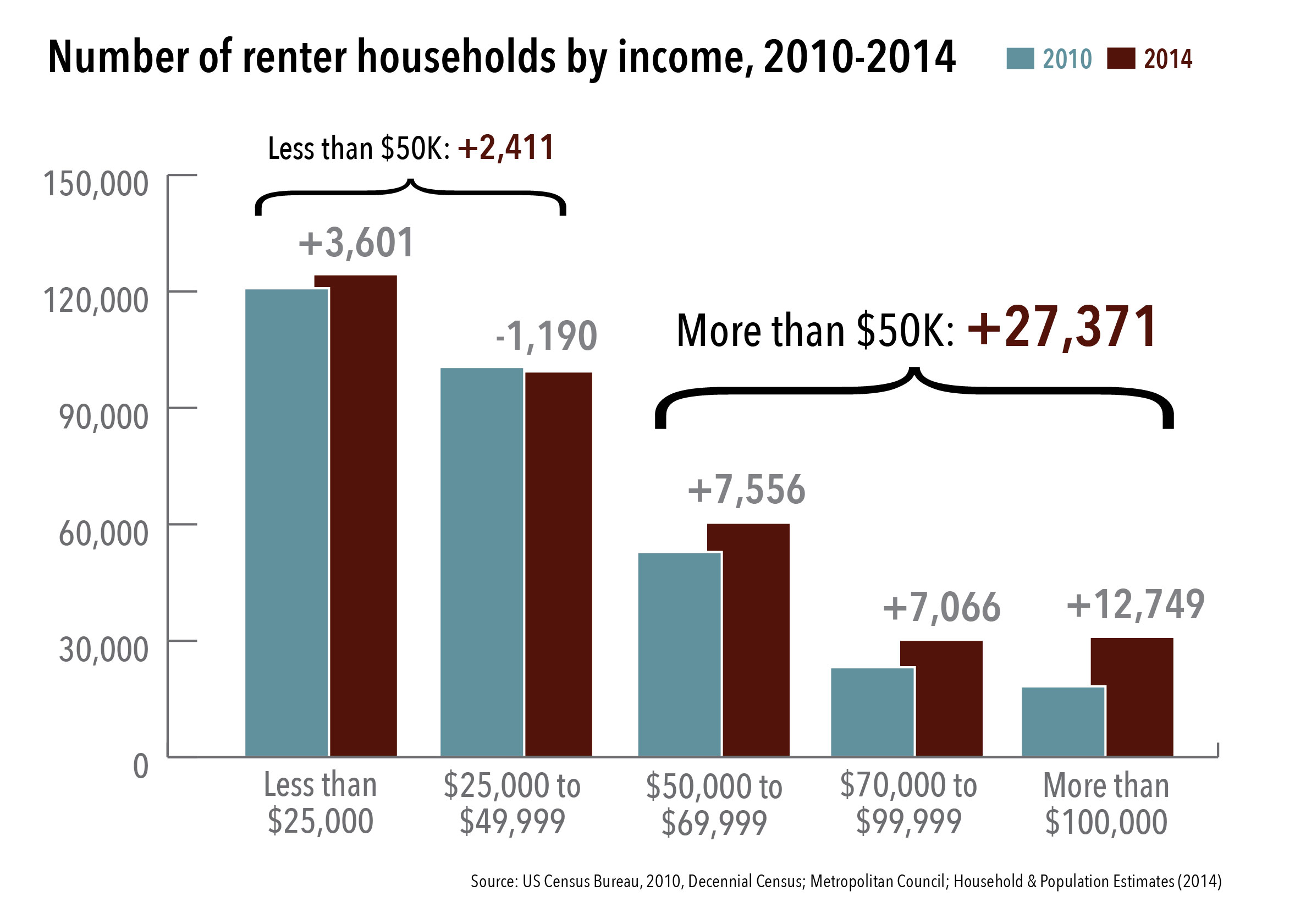 Tenants in racially diverse neighborhoods are at risk

Tenants in racially diverse neighborhoods are at risk 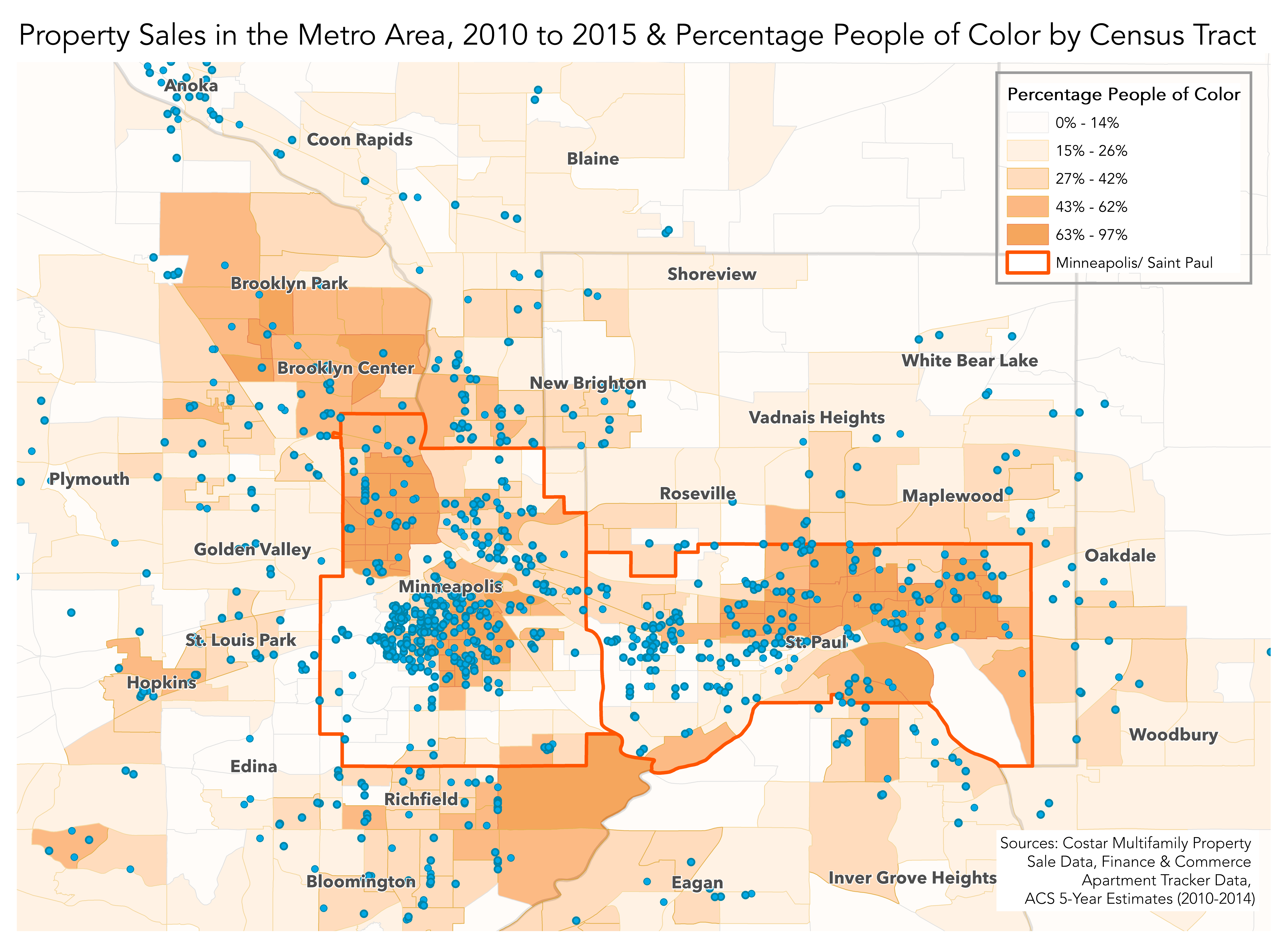 Tenants in racially diverse neighborhoods are at risk: A disproportionate number of rental units were sold in diverse, moderate-income neighborhoods. From 2010 to 2015, 31 percent of all units sold were located in census tracts that are at least 26 percent non-white and have an area median income between $40,000 and $60,000.

The problem is pervasive

The problem is pervasive

The problem is pervasive: In the suburbs, a single apartment sale — like the Crossroads at Penn conversion — can have a catastrophic impact, resulting in the loss of a significant portion of a city’s entire rental housing. But, while they are less visible in the public eye, dozens of smaller apartment properties are being sold every year in St. Paul, Minneapolis and in many suburban communities — and the number of residents at risk of displacement is adding up quickly.

“On a daily basis we observe the trends in this report silently displace thousands of renter households who compete to access a shrinking supply of affordable homes, all too often relying on extremely fragile leases and short notice periods that offer no housing stability,” said Eric Hauge, Lead Tenant Organizer at HOME Line. “The investors driving this crisis in the rental market will not stop displacing our neighbors until there are proactive local, regional, and state actions taken to preserve and improve affordable units while protecting renters right to remain in their homes.”

In an increasingly tight rental market defined by rising rents and low vacancies, the loss of apartment properties with historically affordable rent has a devastating effect on many families and communities. According to the Housing Justice Center, “The conversion of the 698 apartments at Crossroads, by itself, offset virtually all of the production of new affordable housing in the metro area in 2014.” 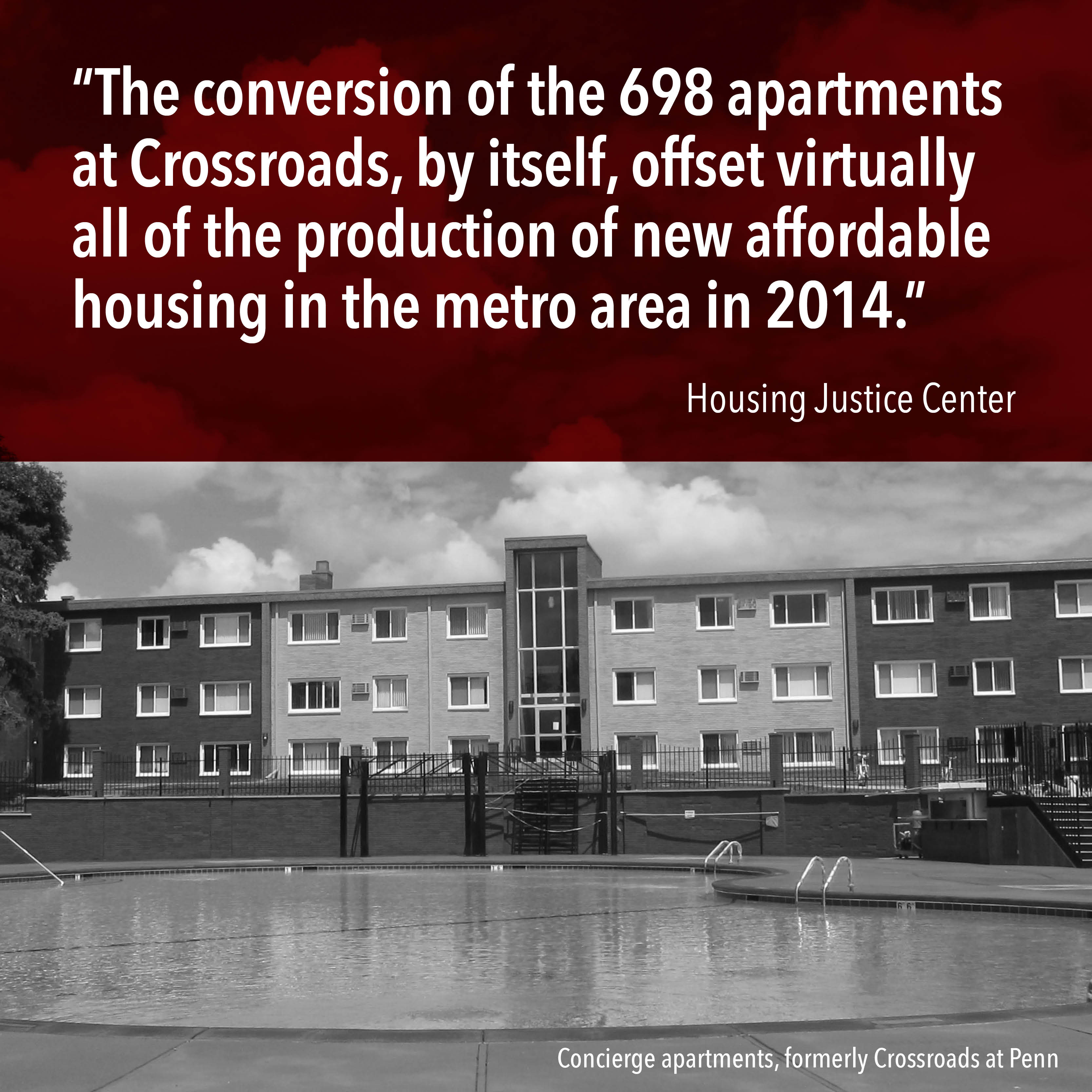 Sold Out is not to condemn investment in the region’s rental housing. It is a call to action to relieve the upward pressure on rents and protect vulnerable populations from displacement. The Twin Cities region cannot afford to sell out thousands of residents.