Building on its 2016 "Sold Out" report, Minnesota Housing Partnership is launching a new research series tracking key trends in the unsubsidized multi-family rental markets across the Twin Cities.

The fourth report, published in January 2019, analyzes data for approximately 23,800 unsubsidized rental units in properties with four or more units in Dakota County from the CoStar database.

Rising number of renters in the County, paying too much for rent 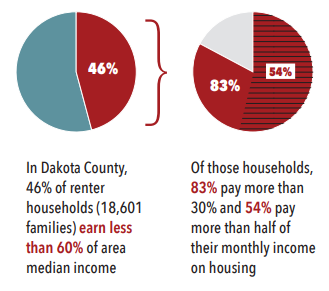 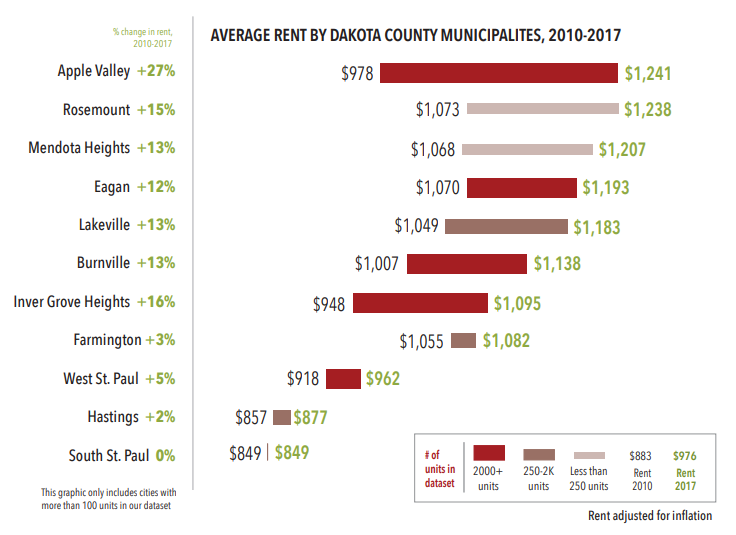 Vacancy rates plunging in the County

In Dakota County, the vacancy rate has fallen from 5.1% in 2010 to 3.2% in the second quarter of 2018, a drop of 37%. When vacancy rates fall below 5%, renter households struggle to find affordable housing choices as property owners are able to be more selective in tenant screening and potentially more inclined to increase rent. This has been the case in Dakota County since 2011. Into the second quarter of 2018, vacancy rates are extremely low in the cities of Inver Grove Heights (1.8%) and Mendota Heights (1.3%). These two cities have seen enormous changes in vacancy rates over time, falling 64% since 2010 in Inver Grove Heights, and falling 58% in Mendota Heights. 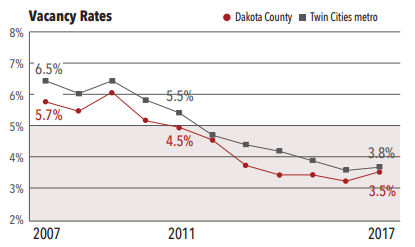 In our dataset, there are a total of 9,320 units in 111 buildings that are affordable to households earning 40% to 60% of AMI — or NOAH units. This accounts for 39% of all units in our dataset, which is notably higher than the 7-county region, in which 19% of units are NOAH. Geographically, the distribution of affordable units across Dakota County follows the cities that contain the most overall multifamily units in our dataset. Burnsville contains the most NOAH units with a total of 2,517 units. West St. Paul (2,001), Eagan (1,902), and Inver Grove Heights (1,121) also have more than 1,000 NOAH units. Properties containing NOAH units are on average larger than similar properties in Minneapolis and St. Paul. Only 23% of these buildings contain less than 25 units, while 42% contain more than 100 units, with the average size of 108 units. Nearly half of NOAH units are two-bedroom apartments (4,521 or 48%), with one-bedroom apartments accounting for 42% of NOAH units (3,892). Like the central cities, though, three- and four-bedroom units are very scarce with just 374 three-bedroom NOAH units and 20 four-bedroom NOAH units in our dataset. 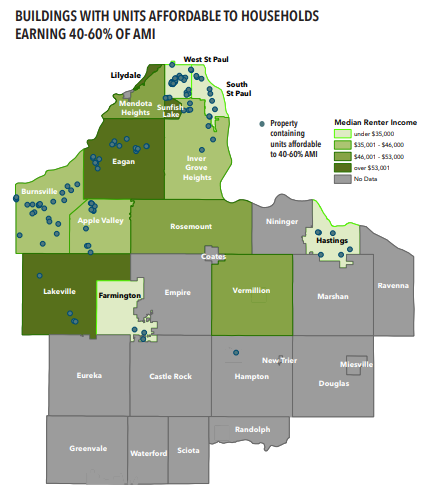 From 2010 to 2017, 8,158 units in 103 buildings were sold in Dakota County. These property sales peaked in 2016 with 24 buildings sold, impacting 2,975 units — or 13% of all units in our dataset in that year. In 2017, sales declined slightly to 21 impacting 1,215 units but still remained higher than the previous seven years. In line with the regional trend, the overwhelming majority of sales were Class C properties, comprising 81% of buildings and 63% of units sold from 2010 to 2017. Class B buildings represented 17% of buildings and 33% of units. Only two Class A buildings experienced a sale. In contrast to the regional trend, sales in Dakota County impacted larger properties. The average size of buildings sold from 2010 to 2017 was 76 units — significantly higher than that of the overall 7-county metro, which saw an average of 45 units.