Issue #3: Forms of NOAH in the 7 County Metro

This third report, published in November 2018, analyzes data for 210,915 unsubsidized rental units in properties with four or more units in the 7-county metro from the CoStar database.

Overall, 52% of renters across the region — 192,555 households — are cost burdened, meaning they spend more than 30% of their gross monthly income on housing. Research has shown that this results in families spending less on other necessities like food, transportation and medical care. This burden falls disproportionately on communities of color. As seen below, 43% of White renter households are cost burdened while 57% and 62% of Native and Black renters are forced to pay more than they can afford for housing. Families served by NOAH are particularly impacted by cost burden. Of the 193,789 renter households earning 60% of the area median income or less, 76% pay more than 30% of their gross monthly income on rent and 42% (nearly 82,000 families) pay more than half of their income on rent. 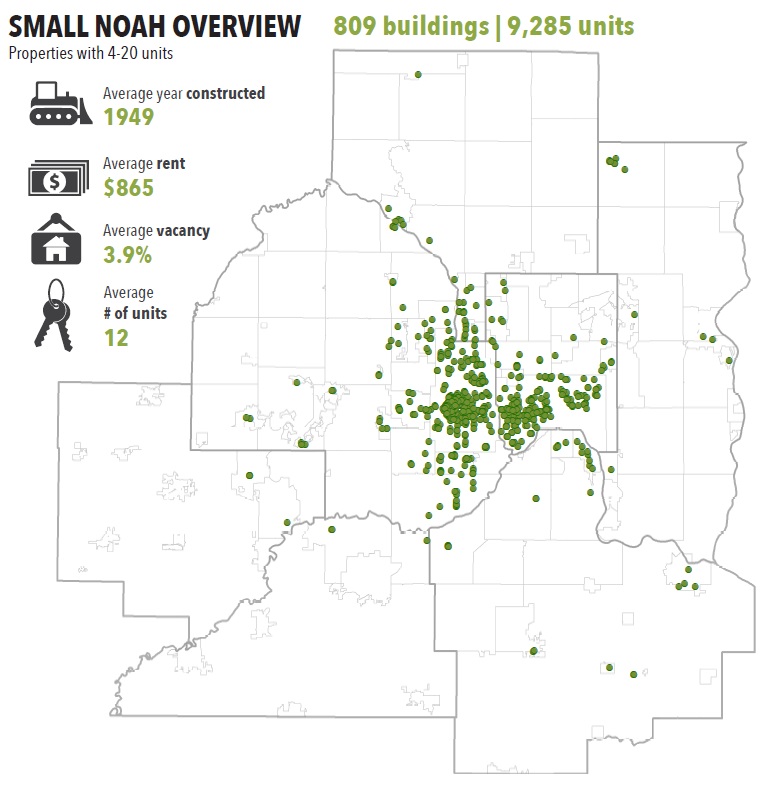 Medium NOAH buildings are prevalent in the core cities and move into the first ring suburbs. Anoka and Scott counties see the largest percentage of their NOAH properties in medium buildings at 38% and 43% respectively. 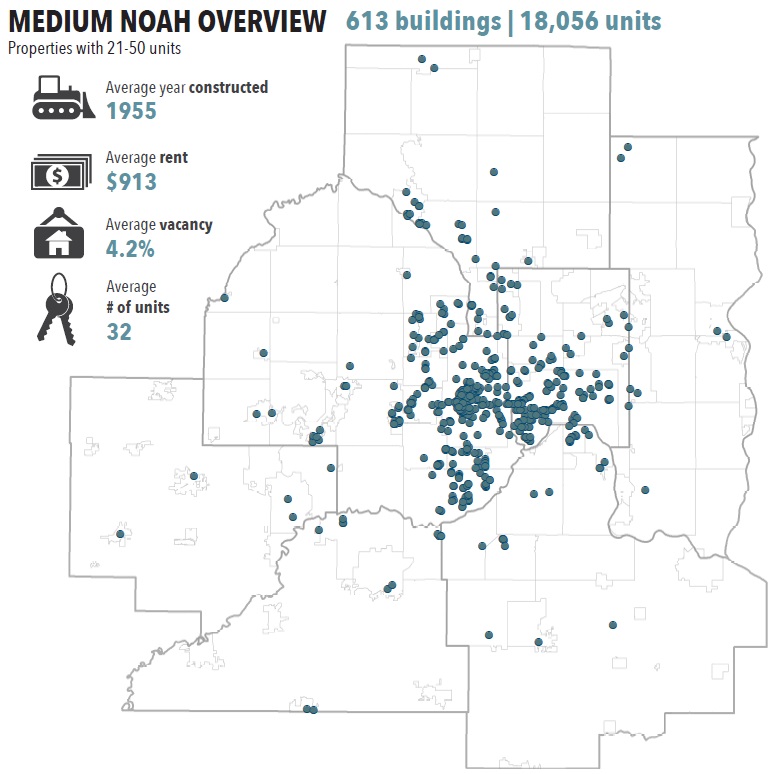 Large NOAH buildings are more widely distributed with more concentration in the suburbs. While large NOAH comprise the smallest percentage of NOAH properties in Hennepin and Ramsey counties they make up 60% of NOAH buildings in Dakota County and nearly half (46%) in Scott County. 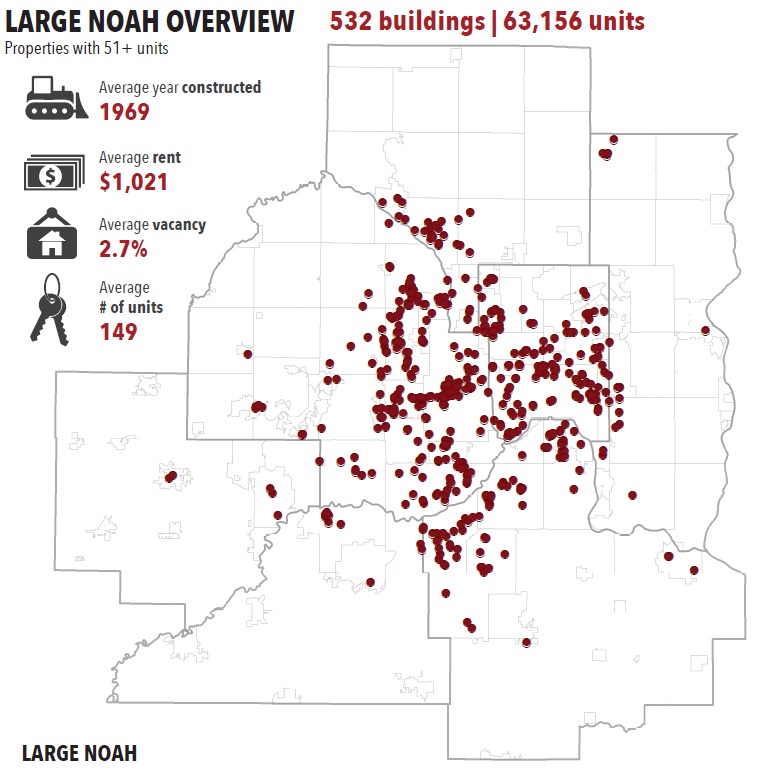 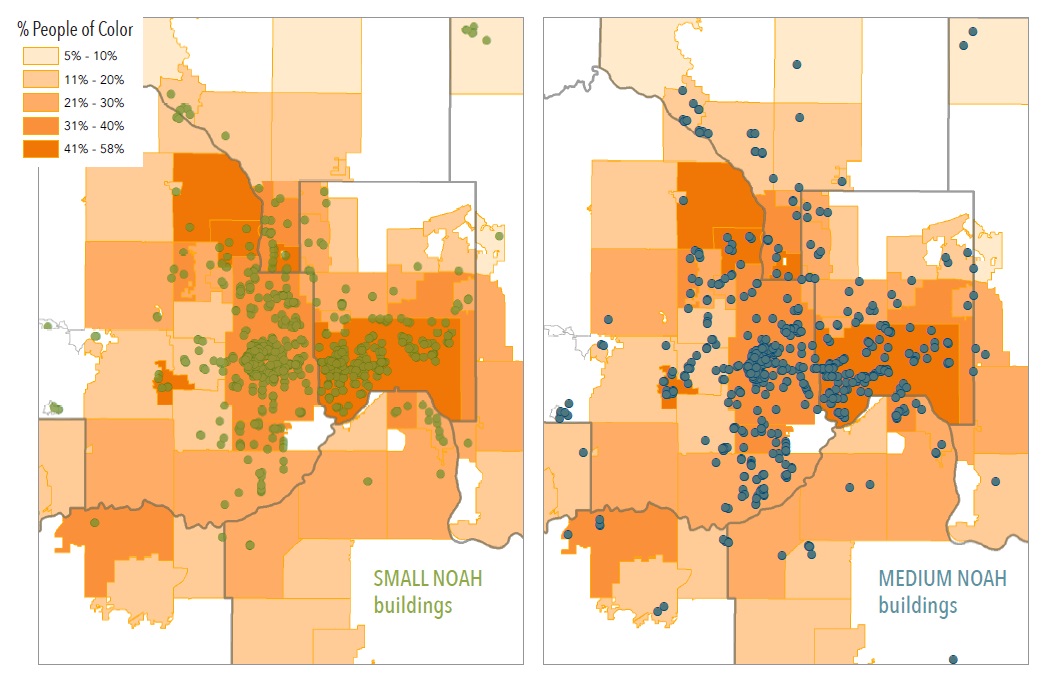 While several high-profile property sales and transitions, like the Crossroads at Penn in Richfield, have focused the attention of policymakers and the public on the need to preserve naturally occurring affordable housing, it is important to recognize that the geography and make-up of NOAH properties is not uniform. To craft effective and viable preservation policies and financing tools, it's essential to identify and understand these distinctions. While there is a need to preserve larger properties, notably in the suburbs that contain hundreds of units, there is also a significant stock of smaller buildings, especially in the central cities of Minneapolis and St Paul and areas that lower median income renters and communities of color call home. It is essential that policymakers, advocates, and developers work to find solutions that fit the needs of their communities and the realities of their housing stock.