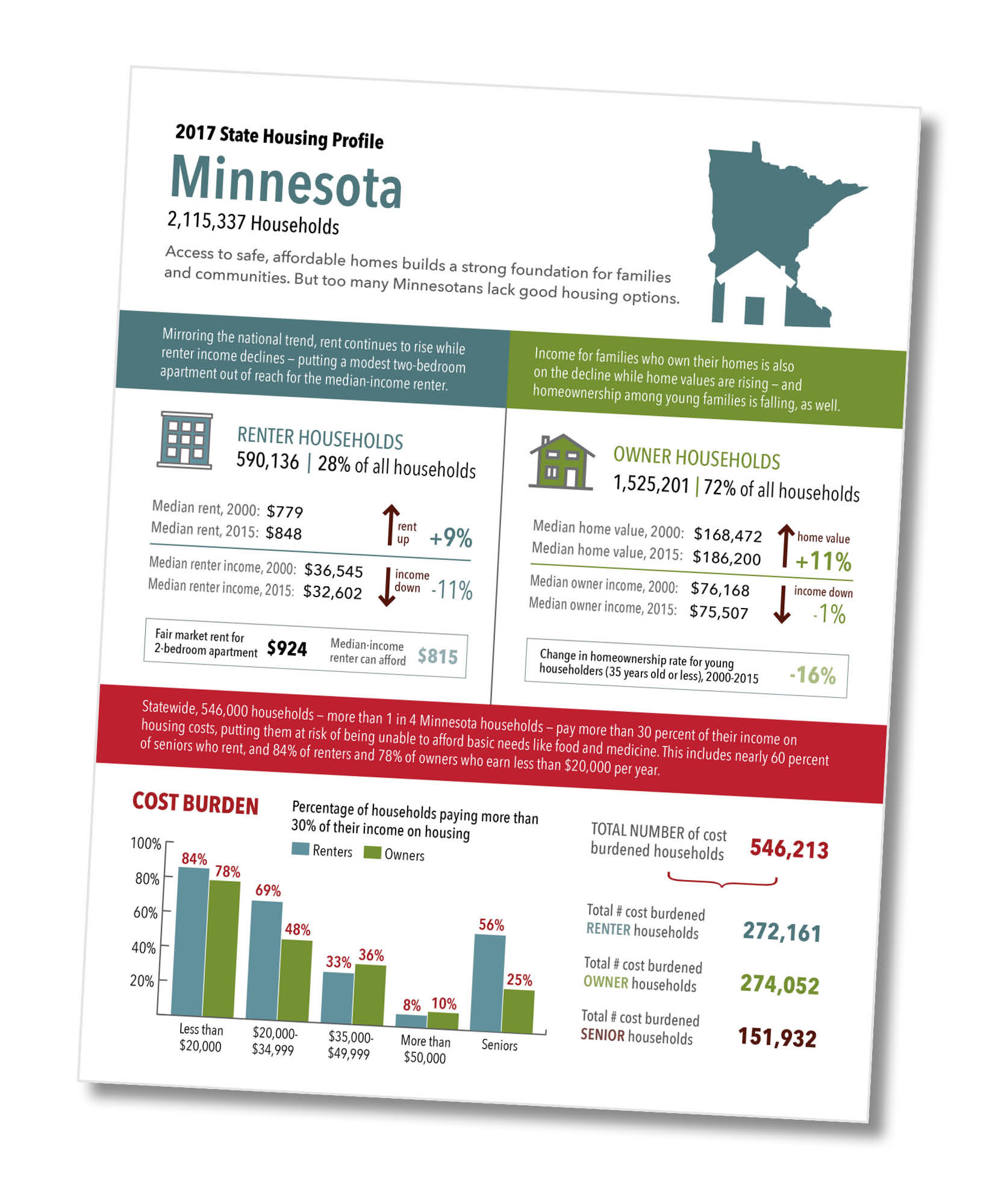 For a growing number of Minnesotans, the housing crisis isn’t over. In fact, it’s getting worse. Currently more than 1 in 4 Minnesota families likely have to sacrifice other needs like food and medicine to pay for rising housing costs.

In March 2017, MHP released its first State of the State’s Housing report — a comprehensive and compelling look at important metrics at the state, region and county levels. In addition to spotlighting key trends, like the gap between the costs of housing and the salaries of in-demand jobs, the report also ranks counties on benchmarks like renter cost burden and showcases issues like aging housing stock with dynamic maps.

The key takeaway: While significant progress has been made in areas like homelessness, housing is still a major challenge impacting virtually every community across Minnesota — with low- to moderate-income families and households of color bearing significant burdens.

Find your county's housing profile in the sidebar to the right — and click here for more from the full State of the State's Housing 2017 report.

Key findings in the State of the State’s Housing 2017 include:

More than 1 in 4 Minnesota households — nearly 550,000 families — spend more than 30 percent of their income on housing, making it likely that they must cut back on necessities like food, education and medicine simply to pay their rent or mortgage.

Since 2000, the number of cost-burdened renters has increased by more than 30 percent and now impacts nearly HALF of all renter households in the state.

Currently, 56 percent of all senior renters in the state are cost burdened — representing a 25 percent increase since 2000. The number of cost burdened senior homeowners has also risen 54 percent since 2000. Over the next 20 years, Minnesotans over the age of 65 are anticipated to grow by 93 percent, making senior housing a critical issue.

While the renting population in Minnesota has increased by 11 percent over the past 15 years, inflation-adjusted rents have risen in 83 of 87 counties. During that time, median rent has risen 9 percent, while the median renter income has fallen 11 percent.

The homeownership gap between White households and households of color has risen to 37 percent, far above the national average of 25 percent. Large racial disparities also persist in other key areas; for instance, people of color represent 60 percent of adults experiencing homelessness.

On the other end of the spectrum, young households (in which the head is under 35 years old) have been less likely to move into homeownership. Over the past 15 years, homeownership rates for this group have fallen in 59 counties, decreasing as much as 53 percent.

Minimum wage earners working full time can’t afford a modest two-bedroom apartment in any county in the state. In the most affordable counties, a minimum wage worker would have to work at least 48 hours; in the Twin Cities and some counties of the Central region, minimum wage workers must work as many as 75 hours per week.

The state’s housing stock is aging and new construction isn’t keeping pace. In 2015, there were 51 counties that received no new permits for multi-family housing. Those that did were concentrated to the Twin Cities region and larger metropolitan areas in Greater Minnesota.

Click here for more from the full State of the State's Housing 2017 report.