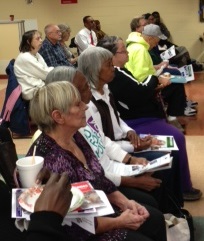 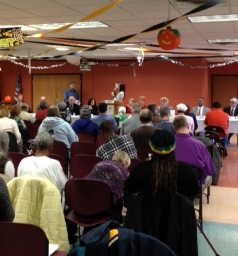 Minnesota Housing Partnership (MHP). Candidates responded to questions from the forum sponsors as well as attendees. Questions concerned security for public housing, the connection between race and homelessness, and efforts to keep Somali youth out of the criminal justice system.

What conference sponsors found most surprising was the broad and strong support among candidates for a proposal to convert the federal mortgage interest deduction into a tax credit. This effort would both benefit lower income homebuyers (particularly those that do not itemize deductions on their taxes), and without requiring new federal revenues, free up about $20 billion per year which would go to states to provide housing for very low income renters.

This proposal is the objective of the national United for Homes campaign and was introduced to Congress through Rep. Keith Ellison’s bill, the Common Sense Housing Investment Act.

Seven of the leading candidates for mayor voiced strong support for the proposal. The eighth, Cam Winton, an attorney and business executive, stated that his opposition was based on concern that it would only add to the national debt. After the event, Winton was informed that the bill does not require any new revenue sources; it reallocates current tax expenditures. Based on this clarification, Winton said he would take a closer look at the proposed legislation.

In voicing their support of the Ellison proposal, two of the candidates – former City Council president Jackie Cherryhomes and current Council member Betsy Hodges – described the federal government as a key partner in developing and preserving affordable housing. Cherryhomes, who also had worked as an affordable housing developer, described the current situation, stating “The feds have walked away and abdicated responsibility.” Hodges added, “If we had a strong federal partner, we would be able to do so much more here in Minneapolis.”

Dan Cohen, former Council member, and Stephanie Woodruff, business executive, also expressed support for the reform and said that the funding made available could leverage other resources.

Candidate Bob Fine, a Minneapolis Park Board commissioner, expressed willingness to go to Washington D.C. to help lobby for passage of H.R. 1213. Candidate and Council member Don Samuels stated that there would be no stronger advocate for this legislation than he; and added that in this advocacy, he would draw upon his ties to HUD Secretary Shaun Donovan and President Obama, whom he has gotten to know through his work to improve his impoverished north Minneapolis ward.

Mark Andrew, a business executive and former Hennepin County Commissioner concluded, “The mayor ought to be willing to take a stand on this legislation,” which he described as “a clear, thoughtful proposal.” Andrew went on to say he would put it in the city’s federal legislative package, would add it to the Minnesota League of Cities platform, and do what he could to call public attention to the need for affordable housing.

About MHRC: As the citywide independent public housing high-rise tenant organization, the Minneapolis Highrise Representatives Council works to increase resident involvement and voice in issues important to them and that impact their quality of life.