Panel: “The way we change values around housing is sharing the stories of tenants” 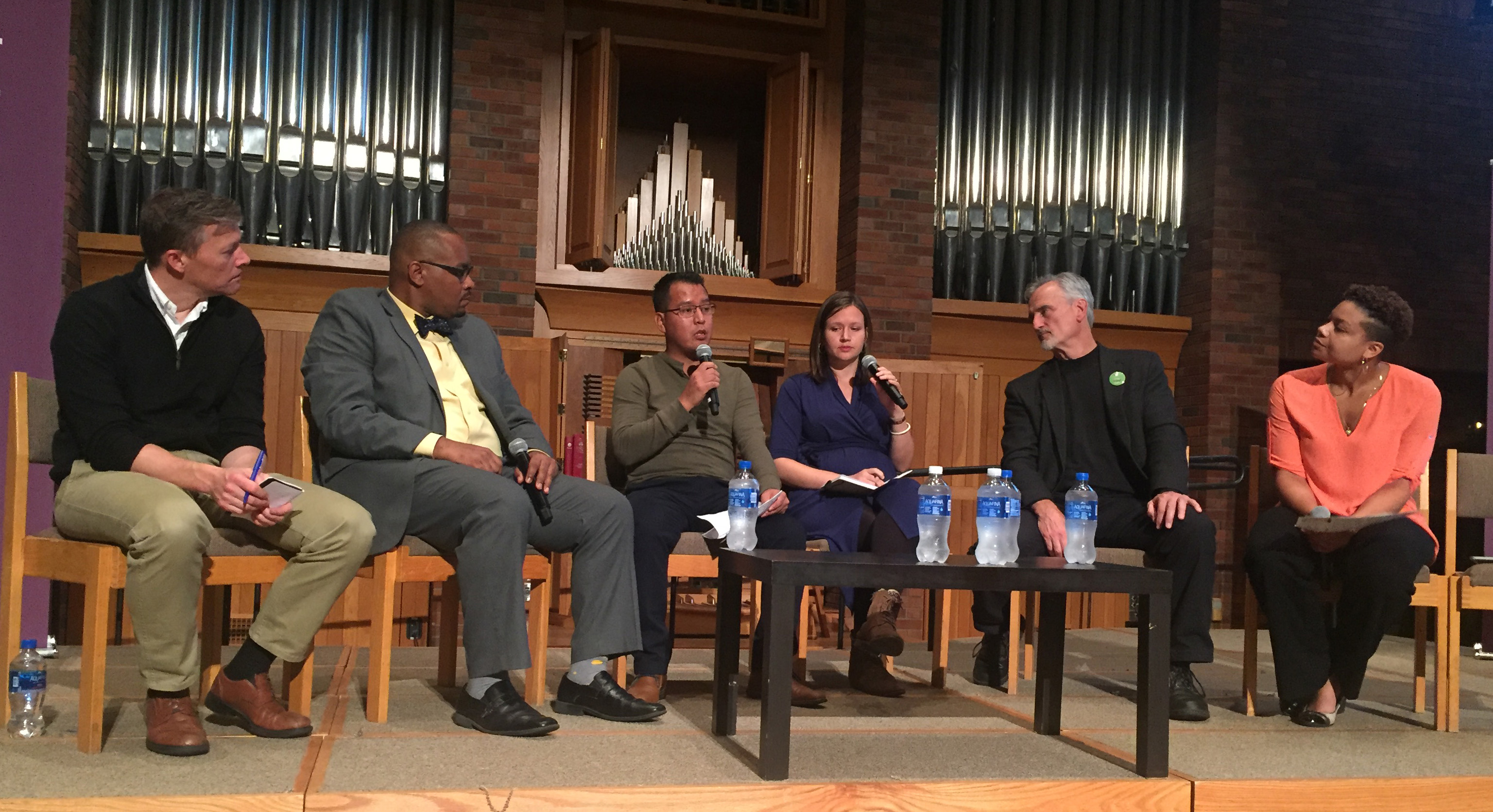 This month, MHP and Alliance Housing hosted Matthew Desmond, Pulitzer Prize-winning author of “Evicted: Poverty and Profit in the American City” for a presentation and discussion in Minneapolis. Desmond shared a bold call to action, pronouncing “We can’t fix poverty in America without fixing housing.”

Building on the MacArthur Genius’ powerful presentation and proposed federal solutions, a local panel of housing experts weighed in with their perspectives and ideas to address local housing challenges.

Moderated by Dr. Brittany Lewis, Research Associate at the University of Minnesota’s Center for Urban and Regional Affairs, the discussion underscored the need for cross-sector collaboration, led by tenant voices, if we hope to end evictions, homelessness and housing instability in the Twin Cities.

As a tenant organizer, Rios shared a sobering perspective on the challenges faced by many Twin Cities renters. “Many tenants are victims of discrimination, eviction or intimidation,” Rios explained. “The majority of the people we work with are immigrants, people of color or people with low income and we know the system is not in their favor. As tenants, they face barriers day after day.” 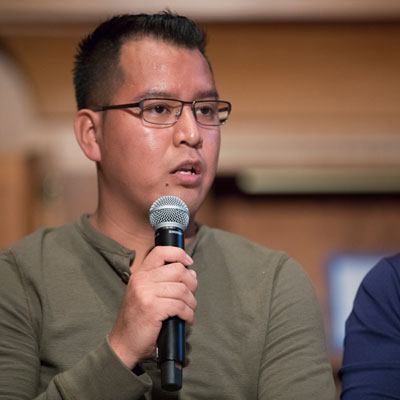 To address those barriers, Inquilinxs Unidxs centers the experiences and solutions proposed by renting families. “We organize with people so they are the ones that ask for their rights,” Rios said. “More than anything, we’re trying to get something like rent control, which would help people who have low income have affordable rent.”

As they have fought for systemic policy solutions, they’ve achieved many positive outcomes through grassroots pressure and organizing, as well. “We truly have had many success stories,” he said. “We have won people’s ability to stay in their homes after receiving a letter of eviction. We’ve worked with people that have received rent increase letters and we’ve won that those increases have not happened. We’re now part of a lawsuit against one of the biggest landlords in Minneapolis, which is one of the biggest class actions we’ve seen in the United States [and which won the largest fine in housing court history—more than $187,000].”

Rios agreed with Desmond that widespread changes will require much broader public awareness. “The way we change values around housing is we need to share the stories of tenants,” he suggested. “There are a lot of stories you don’t know, that you wouldn’t believe if I told you. The other thing is we have to value housing as a home more than we value money. And that is something, as an organization, we are working to win.” 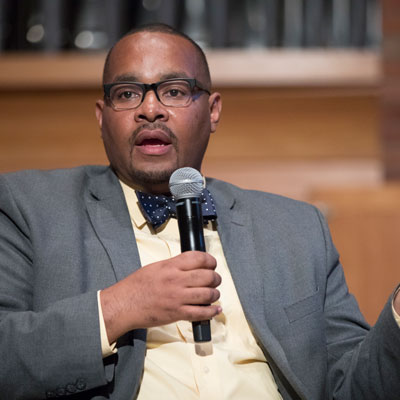 JaPaul Harris, who presides over eviction court, emphasized the need to shift from simply processing people to providing due process. “This shouldn’t be eviction court, but housing court,” he said. “Tenants should be able to assert their rights, as well as landlords… Lots of folks believe eviction happens when the sheriff comes. But it’s a process from when they get the paper [eviction summons] to when the sheriff comes and, if they miss out on any part of that process, they’re missing out on their rights.”

But current policy favor swift disposition. “Statutes create a[n eviction] process that is fast; from start to finish it’s no more than 3 weeks to a month,” he said. “We have to follow the law, and sometimes that’s a barrier for us to keeping people housed.”

As new research released this month showed, far too many households are facing that process without any legal assistance. “When you’re represented by an attorney you get better outcomes, because attorneys know the laws and statutes and know what to look for in raising defenses,” he said. “In Hennepin County, we have the Housing Court Project where attorneys give advice to tenants before they come into the mass calendar.”

But that’s not enough, he emphasized. The public needs to hold judges and policymakers accountable for creating a system that ensures justice not expediency. “For example,” Harris pointed out, “there’s a threat to LSC [Legal Services Corporation] money that fund Legal Aid. If that funding goes away we’ll see more people in housing court without representation.”

Harris agreed that we need to understand the personal stories of tenants and landlords — and take those stories to heart. “I don’t think it’s a question around values,” he said. “Values change and can be manipulated. It’s a question of morals. A lot of housing policies are set back in a time gone by and have not moved to address where we’re at now in terms of an increasingly diverse society as relates to race and class. The policies need to move. But we need the moral courage to say, ‘This is just not right.’” 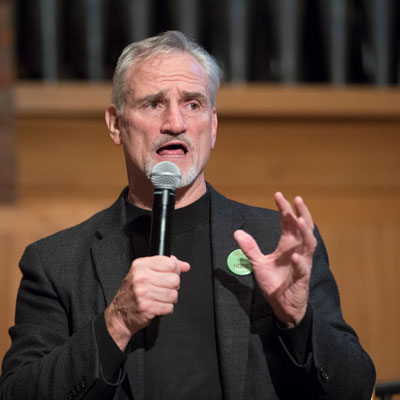 Arthur stressed the urgent need to preserve and protect “naturally occurring affordable housing (NOAH):” properties where rents are still affordable to lower-income families but in buildings that are older and in need of capital reinvestment. Many of those properties are being purchased and upscaled — renovated for higher-income demographics. While Arthur said that Aeon is trying to acquire such properties to preserve affordability, “I project we’re losing 100 affordable units a week, just based on properties we’re seeing and not getting ourselves.”

While there are many technical barriers and financial constraints to providing dignified housing for all, Arthur emphasized that “the fundamental problem is one of values. Who do we want to be as a country? Until that gets figured out, I don’t think this will be solved.”

And Arthur emphasized now is the time to shift that narrative. “I believe we’re one year into a five-year attention span paid to affordable housing,” he explained. “It comes and goes in cycles, and we’re at the front end of a cycle. We have four years to make strides. We need to be organized.”

A call to action

To close out the evening, Anne Mavity, MHP’s Executive Director, issued a call to action to the more than 600 people in the room.

“I’m personally feeling challenged, inspired and determined that we can do a lot better here in our community,” she said. “In this room alone we have a lot of power and agency to actually change the situation. So I’d challenge all of us to ask ourselves, what can we all do as individuals and within the institutions we’re involved in.”

“There have been a lot of great ideas we’ve heard tonight about managing this problem of eviction,” she continued. “But we also need to move upstream to prevent this from happening in the first place. One thing that’s clear is we need to increase the supply of affordable housing, and we’re in a moment now that this is on the radars of a lot of elected officials. Let’s make sure that it stays a priority.”

In that regard, Mavity pointed to the upcoming state legislative session — and funding for housing in a bonding bill — as well as policy changes created through dialogue between tenants, advocates and landlords. “We need a lot of collaboration,” she emphasized. “We need to make sure we’re all marching in the same direction.”

Thank you again to the generous sponsors who made this event possible: Aeon, CommonBond Communities, Minnesota Coalition for the Homeless, and Twin Cities Habitat for Humanity.