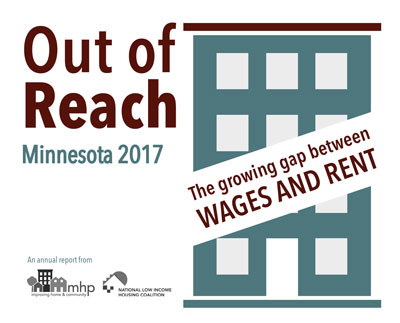 There isn’t a single county in the state of Minnesota where a full-time minimum wage worker can afford even a modest one-bedroom apartment. In the Twin Cities, it takes 70 hours per week at minimum wage to afford rent for a single-bedroom home.

When families pay too much for rent, they’re forced to sacrifice to make ends meet — cutting back at the grocery store or delaying a trip to the doctor.

Yet Out of Reach Minnesota 2017 reveals that households in every corner of the state are spending thousands of dollars more than they can afford each year just to pay the rent for a modest apartment.

“This year’s Out of Reach report illustrates the continuing challenge in covering housing costs facing retirees and people with lower paying jobs,” said Chip Halbach, MHP’s Executive Director. “For years now, increases in the cost of housing have outpaced renter income in Minnesota, meaning that even more seniors and families are forced to make difficult decisions between paying rent or purchasing food and medicine.”

Building on an annual report released by the National Low Income Housing Coalition this month, MHP’s new analysis points to an urgent need to increase affordable housing in communities across the state, in urban centers and Greater Minnesota.

Among the key findings of MHP’s 2017 report:

Minnesota has climbed to #21 on the list of most expensive states in the nation, up from #24 just five years ago, rising above states like Texas and Arizona.

From 2016 to 2017, the state housing wage — what a household must earn to spend less than 30 percent of their income on housing — increased by more than 5 percent.​

To afford a two-bedroom apartment, the median-income renter in Minnesota would need a 13 percent raise.

A full-time minimum wage earner can’t afford even a one-bedroom apartment in any of Minnesota’s 87 counties.

The lowest income households — those earning 30 percent or less of area median income — can afford a modest one-bedroom apartment in only four of Minnesota’s 87 counties. Even efficiencies are not affordable in 35 counties.

New analysis focused on the Minneapolis / St Paul metro are:

How many hours less would a minimum wage earner have to work to afford an apartment in Minneapolis / St. Paul if the minimum wage were $15 instead of $9.50?

How much do you need to earn to afford rent in each zip code of Minneapolis and St. Paul?

How does the income — and the ability to afford rent — of households of color compare to white households in places like Hennepin and Ramsey County?

See the full Out of Reach Minnesota 2017 report here.

See national data, analysis, and maps from NLIHC at http://www.nlihc.org/oor