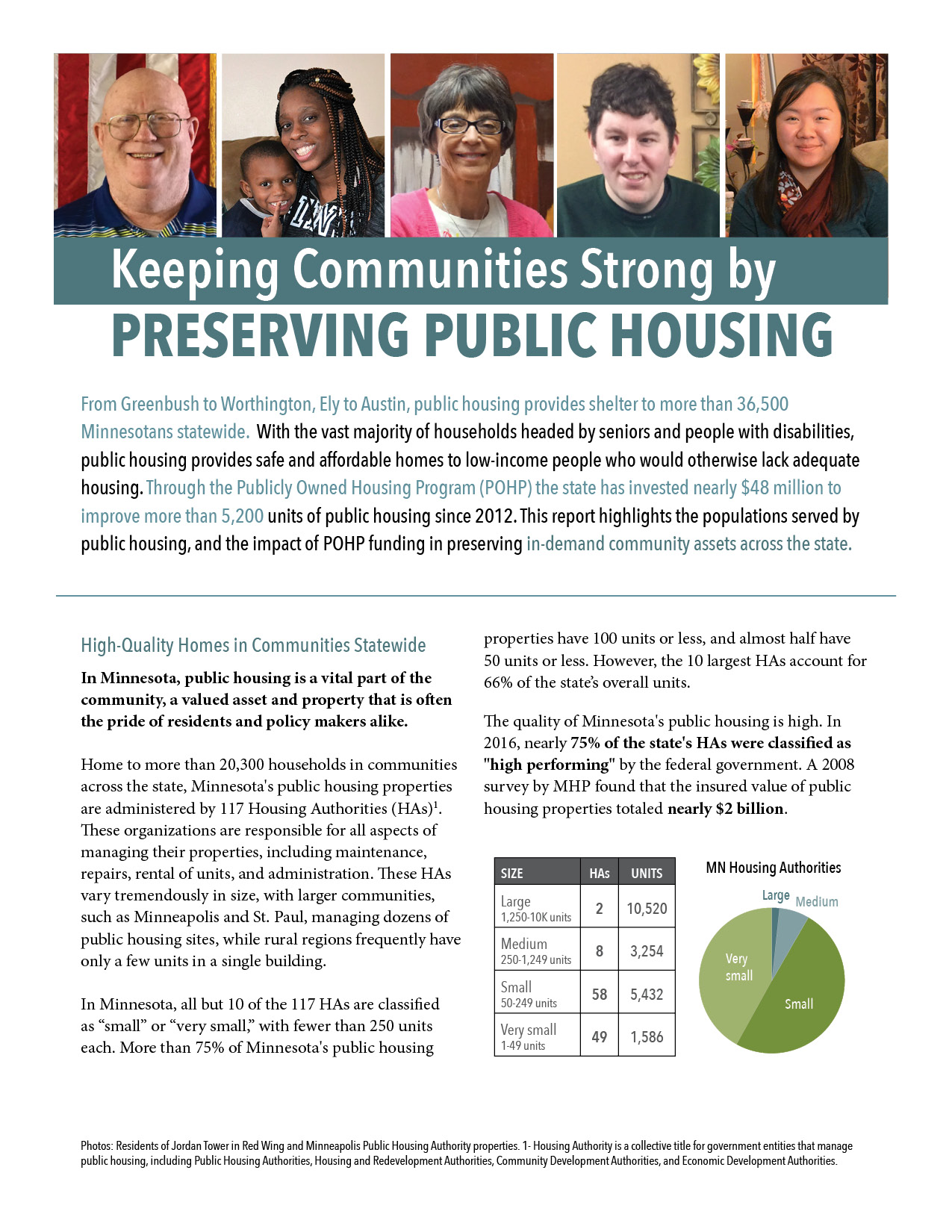 From Greenbush to Worthington, Ely to Austin, public housing provides shelter to more than 36,500 Minnesotans statewide. With the vast majority of households headed by seniors and people with disabilities, public housing provides safe and affordable homes to low-income people who would otherwise lack adequate housing. A new MHP report highlights the populations served by public housing, and the impact of the Publicly Owned Housing Program (PHOP) in preserving in-demand community assets across the state.

Home to more than 20,000 households in communities across the state, public housing predominantly provides homes to our most vulnerable community members: seniors, children, veterans, and people with mental or physical illness or disabilities. Excluding Minneapolis*, 65% of public housing households across the state have a head of household who is a senior, has a disability, or who is both a senior and has a disability. Thirty-three percent of households include children, and 60 percent of households earn less than $15,000 per year. By providing stable shelter for those who often face the biggest barriers, public housing reduces costs in other areas, like shelters and services for the homeless and disabled. 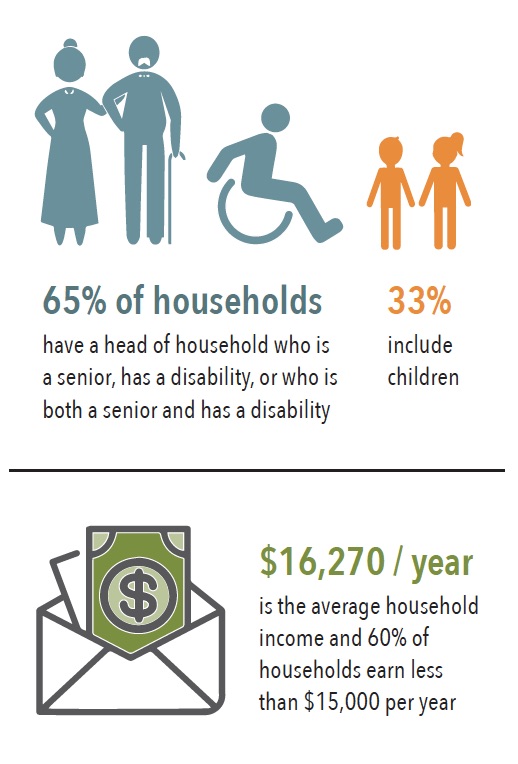 However, funding declines threaten the health and safety of Minnesota’s public housing. For a disabled senior or a veteran in a wheelchair, a broken elevator is more than an inconvenience. Public housing has been hit hard by federal funding cuts, with funding falling by $1.6 billion from 2010 to 2016. Nationally, funding for repairs has fallen 53 percent since 2000. In 2016, public housing agencies received only 84% of the actual costs of operating their units.

In Minnesota, where 95% of the public housing stock is more than 35 years old, housing authorities too often don’t have the resources to address critical issues like repairing roofs, upgrading major heating systems and implementing security measures — putting this key community asset at risk. That’s why state investment plays a vital role in preserving homes for the more than 36,500 Minnesotans who live in our public housing.

The Minnesota Legislature established the Publicly Owned Housing Program (POHP) to rehabilitate and preserve public housing units. Since 2012, the POHP program has awarded $47.6 million in funding to 76 projects across the state, impacting 5,232 units. There’s a high demand for these dollars. In 2017 alone, the program received a total of 38 applications representing 2,368 public housing units in need of rehabilitation. These applications requested a total of $19.3 million in funds with only $12 million to award.

Download the full report to read the stories of public housing residents such as Nada (left), LouAnn (center), and Dennis, a resident of North Star Apartments (right).

POHP funds are funded by the sale of General Obligation (GO) bonds. MHP’s report underscores that we need continued investment in bonds for housing to ensure the 36,500 Minnesotans who live in public housing, in communities from Greenbush to Worthington, Ely to Austin, have a safe and healthy place to call home. MHP and our Homes for All MN coalition partners have joined together to advocate for $30 million in GO bonds during the 2018 State Legislative Session (S.F. 2939 | H.F. 3125) — an investment that would have a major return for communities statewide.

* Data around public housing in Minneapolis is separated from the rest of the state due to Minneapolis having the only Moving to Work program in the state. Data from this program is collected and entered to HUD via a different form than other PHA’s tenant data. The Resident Characteristics Report, from which this data is derived, does not include tenant information submitted through Moving to Work.