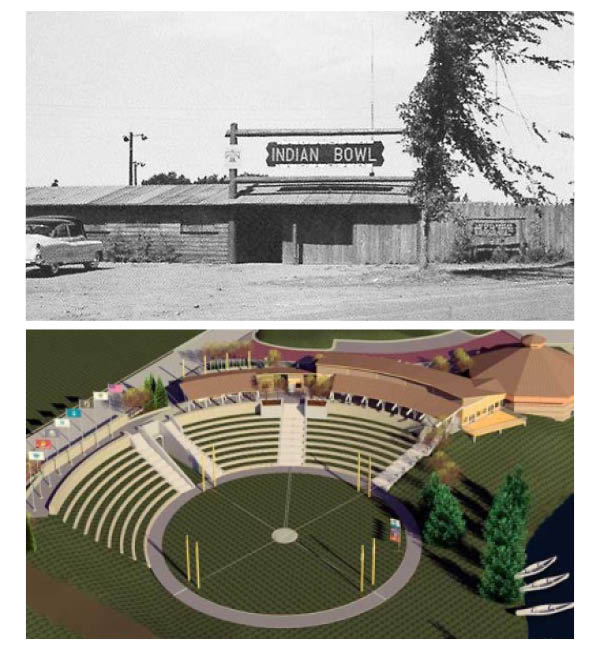 For more than 50 years, people from across the Midwest visited what became known as the “Indian Bowl” to share in the culture and traditions of the Lac du Flambeau Ojibwe. On warm summer evenings, they gathered in the colosseum-like seats to marvel at the powwow dancers’ intricate footwork, watch their swirling dresses, and feel the beat of the drums.

But after half a century of Wisconsin winters, the concrete seating of the Indian Bowl was crumbling, and the building was falling into disrepair. When a study showed only a $300,000 difference between renovating the facility and building a new one, the Lac du Flambeau community saw an opportunity to bolster its mission to share and sustain the Ojibwe culture. In September 2014, crews demolished the Indian Bowl to make way for the Waaswaaganing Indian Bowl Living Arts and Culture Center. “Waaswaaganing” means “Lake of Flames” in Ojibwe, describing the look of a lake as it is spearfished by torchlight.

On August 4, 2016, the Lac du Flambeau community finally broke ground at the site of the new Indian Bowl. Approximately 60 people attended, including community members, architects, donors, students from the Abinoojiiyag Youth Center, and a Korean cultural exchange group visiting from New York. The ceremony included a prayer, speeches by Indian Bowl friends and supporters, and a celebratory picnic at the Lake of the Torches Resort Casino.

“The Indian Bowl has been the highlight of Lac du Flambeau for decades,” Georgine Brown, President of the Waaswaaganing Indian Bowl, explains. “Throughout the years, many families here have been a part of the Indian Bowl shows, making it a renown tourist attraction in the northwoods of Wisconsin. We shared our culture and heritage for all to learn what we as Anishinaabeg were all about. Today, many of these families still enjoy performing the storytelling dances taught to us by our grandfathers and grandmothers. The rebuilding of the Indian Bowl will once again revitalize the community economically as tourist and visitors come to learn and share all our cultural differences.”

The new Indian Bowl combines the George W. Brown, Jr. Ojibwe Museum, the Woodland Indian Arts Center, and the Waswagoning Ojibwe Indian Village. The completed facility will include classrooms, exhibit space, wigwams and a retail shop for Woodland Art along with a new performance arena, concessions stand, and changing area for performers. The design incorporates traditional Ojibwe patterns and elements that evoke wigwams, birch bark canoes, and black ash baskets. And, unlike the previous facility, it will be available year-round to community members, tourists, and school groups.

The fourth largest Native American population in the U.S., the Ojibwe region largely borders Lake Superior, extending into Wisconsin, Minnesota and Canada. According to board member, volunteer, and long-time Indian Bowl supporter Betsy Behnke, the new Indian Bowl will be a unique cultural force in the region.

“It will be the only center of its kind in this entire area,” Behnke says. “For two or three hundred miles there’s nothing that displays culture. There are a lot of tribes that have their powwow areas, but no one has the classroom space or the teaching space we hope to have — including Canada.” The educational aspect is important to Behnke, who feels that the new Indian Bowl will play a crucial role in sharing Ojibwe culture with future generations.

According to Kim Swisher, public relations coordinator, the Living Arts and Culture Center provides a space for people of all ages and cultural and ethnic backgrounds to better understand the history of the Ojibwe and their important role in the community. “I think this is a great opportunity to educate this area and the region on how impactful the tribes have been to the good way of life that we experience here.” 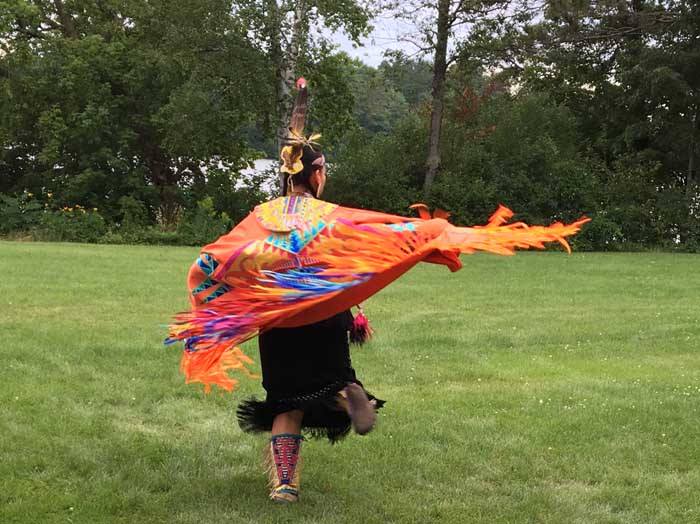 Translating the Lac du Flambeau community’s vision into reality took commitment and hard work. It took 12 years to move from the initial discussions in 2004 to the groundbreaking last month. During that period, board members had to get creative to mobilize community members and secure funding for the project, reaching out to local and regional organizations for help.

Minnesota Housing Partnership was honored to be one of those organizations. In 2014, MHP began working with the Lac du Flambeau community, the Indian Bowl board, and a group of Northern Wisconsin tribes called Northwoods NiiJii. Funded by the U.S. Department of Housing and Urban Development’s Rural Capacity Building program, MHP provided more than $100,000 — the largest award in MHP’s history — to help move the project forward. In addition to technical assistance from MHP staff, those dollars helped to cover the cost of hiring the architect and engineer, who then provided the architectural drawings for the project’s capital campaign, as well as for construction costs. The project also benefited from HUD-funded assistance from the California Community and Economic Development Association (CCEDA), which helped Northwood Niijii secure additional funds for its organization and the Indian Bowl.

“MHP has been so proud to support Northwoods NiiJii realize the dream of having a gathering place for tribal members, artists and dancers to come together and celebrate their culture and community by providing the largest financial assistance to this project.” Rosemary Fagrelius, MHP Community Development Director

“We would not have been able to do this without [MHP’s] help, and that goes for all our partners,” Coy says.

“I think the majority of people on this board are new to this process, and I think the trainings helped them tremendously,” Behnke says. “One of the big things people have learned is Robert’s Rules [of Order], so we can run a meeting and have it flow smoothly and not take forever. Every piece of education makes a big difference.”

Swisher says that after the trainings, the challenges of the project no longer seemed “insurmountable” to members of the board. “I think overall, it gave the board a sense of direction,” Swisher says. “The trainings broke things down into simple steps that people were able to say, ‘Yeah, I can do this.’ And that really made a difference.”

Brown, Coy, Behnke, and Swisher are eager to see the community’s vision come to life. “I’m excited to see the smiles on the faces of the dancers, the drummers and all the artists when we open,” Coy says.

Stay tuned to the MHP blog for future updates. Learn more and support the project here.