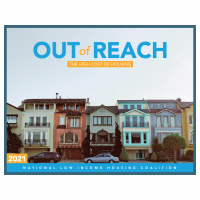 When families pay too much for rent, they’re forced to sacrifice to make ends meet — cutting back at the grocery store or delaying a trip to the doctor. Released last week, the National Low Income Housing Coalition’s Out of Reach 2021 report highlights state and county trends to reveal that households in every corner of Minnesota are spending thousands of dollars more than they can afford each year just to pay the rent for a modest apartment. Now more than ever, as evidenced by the rippling effects of the COVID-19 pandemic, housing security is central to overall health and well-being.

The annual Out of Reach report by the National Low Income Housing Coalition provides rental affordability data for every state, metro area, and county in the US.

Some Minnesota highlights from the 2021 report include:

When rent is out of reach for those who are fully employed, our communities pay the price. We cannot afford to let housing costs continue to climb, while wages remain stagnant. Currently, nearly 30 percent of Minnesota residents — more than 620,700 households — live in a rental unit.