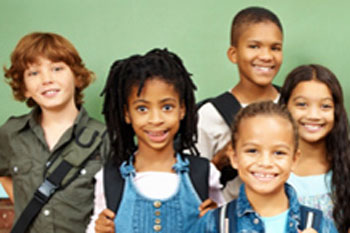 At first, the teacher thought it was just a creative excuse when her sixth-grade student said she couldn’t do her homework because her hands were too cold at night. But when the Elk River educator found out the student’s sister was also missing assignments for the same reason, she called Stephanie Klinzing.

Now a board member of the Minnesota Housing Finance Agency, Klinzing, a former Mayor and County Commissioner, connected with community organizations to find the family to offer help.

It didn’t take Klinzing long to locate the students; their family was living in an old hotel that lacked basic amenities, like heat. With the assistance from a local nonprofit, the family was moved into emergency housing and it wasn’t long until Klinzing got another call from the teacher telling her the student’s “turnaround was immediate.” No longer living in an unsafe situation, the student completed her homework and began to excel in school.

Klinzing shared the story at the December board meeting of the Minnesota Housing Finance Agency, which, among other items, included discussion and approval of the Homework Starts With Home (program photo right) pilot program to assist the families of homeless or highly mobile students.

In her opening remarks, Commissioner Mary Tingerthal shared her relief that, after a showing a strong public support, the federal tax reform bill retained private activity bonds, making moot a resolution at a special board meeting on December 14 to allow staff to move forward with convertible option bonds. Still, she noted, PABs could come under threat again in a federal infrastructure bill next year.

Tingerthal also announced the formation of a Governor’s Task Force on Affordable Housing, to which Terri Thao will be the Minnesota Housing representative. With three working groups — housing stability, rental and homeownership — the task force will have five open task force meetings and six regional forums in preparation of a report to be submitted by the end of July with specific legislative recommendations. 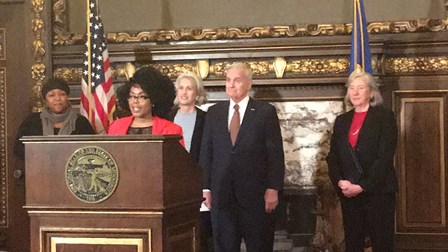 Finally, Tingerthal shared that the Governor reappointed Damaris Hollingsworth to another term on the MHFA board, so there will be no anticipated vacancies in 2018.

Last year, public and charter schools across Minnesota identified more than 9,500 students at 1,200 schools statewide who were experiencing homelessness on October 1, 2016, a troubling number that has increased an average of 15 percent per year. To address homeless and highly mobile students, Minnesota Housing, in partnership with the Office to Prevent and End Homelessness, the Minnesota Department of Education (MDE), the Minnesota Department of Human Services (DHS) and the Heading Home Minnesota Funders Collaborative (Funders Collaborative), is launching the Homework Starts With Home pilot program.

Joel Salzer, MHFA’s Director of Housing Stability, explained to the board that the new pilot program builds on lessons learned during the homeless and highly mobile student pilot funded in 2013 and 2015. While that work showcased the efficacy of providing stable housing and its impact on student attendance and performance, it also revealed that the level of support can be better tailored to make resources go further. With a “progressive engagement” approach, Salzer explained, households entering the new Homework Starts With Home pilot will go through a complete assessment and receive time-limited housing subsidies rather than securing a two- to five-year commitment. Families will be eligible for additional assistance, as needed, but a more targeted approach will allow more families to be served.

Salzer shared that the agency is now moving forward with partners to issue a Request for Letters of Interest (LOI) to fund local partners interested in developing their capacity to end student homelessness. Eligible respondents would be invited to participate in program design activities that would promote enhanced local responses to student homelessness in their community. Then, Minnesota Housing will issue a Request for Proposals (RFP) for which LOI respondents that meet the threshold criteria would be eligible to apply. Through the RFP, respondents would request specific funding from the nearly $2.5 million in funding from the Housing Trust Fund, Family Homeless Prevention and Assistance Program and philanthropic resources.

Board members expressed their enthusiasm for the pilot, including Stephanie Klinzing who emphasized that such programs are highlighting the connection between housing and school performance and creating systems that make it easier for educators — who don’t “do housing” — to more quickly address these critical issues for their students. The board approved the motion and resolution to move forward with the pilot program.

Tingerthal also shared with the board that Minnesota Housing has received the $2 million grant from Margaret A. Cargill Philanthropies for the Building Systems to Prevent and End Youth Homelessness project concept discussed at the November board meeting. (More below.)

Selection of firms to serve on the Investment Banking/Underwriting Team

Every four years the Agency selects a group of firms to serve as its investment banking / underwriting team. Of the firms selected for the team, traditionally the Agency also has designated a single firm to serve as the senior manager for its financings. Because these selections are appointments, the Agency has the right at any time during the duration of the appointments to make any changes it desires in the composition of the investment banking team. As a result of a robust RFP and interview process, the members of the interview panel recommended that the board select RBC as senior manager of the investment banking / underwriting team, and appoint JP Morgan, Piper Jaffray and Wells Fargo as co-managers on the team.

Members of the board, including Craig Klausing and Ramona Advani who served on the interview team representing the board, praised the agency for a thorough and effective process and the motion was approved.

MHFA staff Kevin Carpenter walked the board through a new financial reporting package and dashboard aimed at providing a level of transparency and enhancing the Board’s understanding and knowledge of the Agency’s financial picture. He noted that the format will be evolutionary and refined over time. The package can be found on pages 56-61 of the board packet, with noteworthy items outlined on page 62. 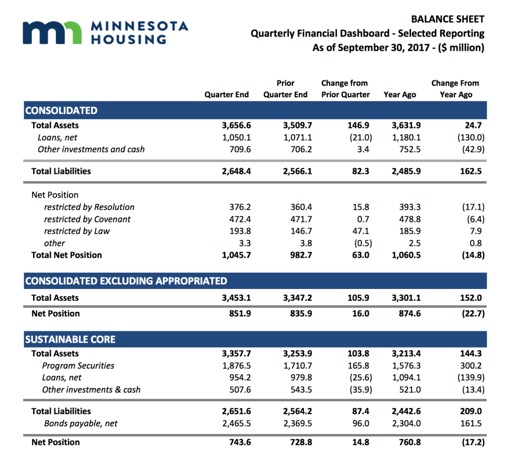 At the November board meeting, several significant items were discussed.

Joel Salzer shared with the board the Margaret A. Cargill Philanthropies (MACP) Building Systems to Prevent and End Youth Homelessness Project Concept, which, if awarded, would provide $2 million over a three-year grant period to help to end youth homelessness in northwest Minnesota and to develop a school-based host home pilot for unaccompanied homeless youth in up to three rural communities. Commissioner Tingerthal shared with the board that this is the first time we have been in a situation that the Agency itself may be a recipient of a major financial grant from a philanthropic organization. (As noted above, Tingerthal shared at the December board meeting that MHFA received the $2 million grant.)

HUD RFP for Performance Based Contract Administration of Section 8 Project Based Rental Contracts:

MHFA staff Tom O’Hern and Anne Smetak shared with the board that it is anticipated that HUD will release a new RFP to select a Performance Based Contract Administrator (PBCA) for project-based Section 8 properties in the state of Minnesota and nationwide. The Agency is currently the PBCA for the state of Minnesota, has a corresponding Annual Contributions Contract with HUD (the “PBCA contract”), and expects to respond to the RFP when it is issued. While specifics will not be available until the RFP is actually issued, HUD has indicated that, unlike in the past, it may require regional responses to the RFP. If HUD requires regional responses, respondents would need to submit proposals to cover the PBCA work for multiple states, rather than just one state. The Agency has been working with other state housing finance agencies in HUD’s Midwest Region (comprised of Minnesota, Wisconsin, Indiana, Illinois, Ohio and Michigan) to determine how best to respond to the RFP if a regional response is required.

John Patterson reported that home mortgage lending was near record levels in 2017, with an increase in budget from $600 million to $650 million. He noted that this level of production is particularly impressive given the diminishing supply of homes for sale that are affordable to our borrowers. Since 2014, the supply of homes in the Twin Cities metropolitan area selling for less than $250,000 declined by 54 percent, while the agency’s lending across the State increased by 56 percent.