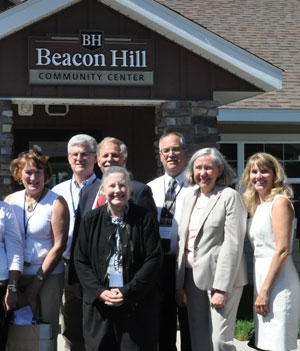 At its August meeting, the board of the Minnesota Housing Finance Agency discussed a range of topics, including the state’s 2017 Affordable Housing Plan, the model collaboration that led to the grand opening of a supportive housing development in Grand Rapids and the increasing threat to manufactured housing parks, which provide significant affordable housing supply.

In her opening remarks, Minnesota Housing Commissioner Mary Tingerthal expressed her disappointment that the Minnesota legislature will not hold a special session. This means that the resources available for the upcoming funding round will be less than originally expected, although there will be a small amount of bonding resources available as several previously awarded projects required fewer resources than were originally awarded.

In her report on recently attended groundbreakings and ribbon cuttings, Tingerthal highlighted the community process associated with the Beacon Hill project in Grand Rapids (pictured above). She credited the Housing Institute, created and facilitated by MHP and GMHF, with organizing and facilitating a cross-disciplinary community leadership process. This led to a multi-faceted development addressing a number of community interests. Family housing was created side-by-side with supportive housing for people experiencing homelessness and with special needs, all sharing services through a new community center. Tingerthal said that the process and development spurred a sense of community pride, and fostered what the participants believe will be an enduring partnership.

Two major planning efforts were brought to the board. First, John Patterson, MHFA’s Director of Planning, Analysis, and Evaluation, provided a status report on the 2017 Affordable Housing Plan (AHP), the Agency’s annual business plan. The AHP planning process, initiated this past April, provides multiple opportunities for the Agency’s stakeholders to have input. Patterson noted that 130 people participated in the Agency’s AHP webinar held earlier that day. Board member Rebecca Otto asked if there were any proposed changes in the Agency’s strategic priorities. Staff responded that the priorities adopted in 2015 did not change. In response to a question about equity, Tingerthal responded that the Agency was looking at policies related to requirements for hiring minority contractors. She said that there were a number of local contracting requirements across the state and the Agency wanted to be careful to not add its own layer of expectations without carefully considering the existing requirements. She said that staff plans to have its contracting proposals ready for the 2017 funding round.

Jessica Deegan, MHFA’s Federal Policy Manager, updated the board on the HUD required 2017-2021 Consolidated Plan. This planning process identifies how various HUD resources (e.g., HOME, CDBG) will be used. For the consolidated planning, Minnesota Housing collaborates with DEED and DHS, the other state agencies administering HUD funds. These state agencies will be accepting comments through September 15, and will host a public hearing on September 1. Over the five-year planning period Minnesota Housing expects to allocate $30 million in HOME funds and $15 million from the new National Housing Trust Fund. In the stakeholder input received to date, Deegan said that low rental vacancies were the major concern, followed by the need for home rehab. Homeownership did not rank high, she said. NIMBY (“Not In My Back Yard”) opposition, rising costs for developers and rents for tenants were issues across the state. In response to a question regarding who was providing input, Deegan said it was mostly advocates, but that the Agency was seeking ways to get input from people who faced the need for various types of housing assistance, as well.

Margaret Kaplan, Director of Community Development, updated the board on manufactured housing. Kaplan said that this was a very important source of unsubsidized affordable housing for the state, but one at risk. Kaplan reported to the board that Minnesota Housing, which administers the state fund to compensate those who lose their homes due to park closures, was now monitoring six active closure notifications. The affected parks ranged from three to 97 homes, she said. Kaplan speculated that the economic recovery was driving the park closures, as once remote parks were now enveloped in high-demand communities. Rising land values are increasing redevelopment pressure on many parks. Another problem facing the parks, said Kaplan, is aging infrastructure. Streets and water/waste water systems are privately owned and often not adequately maintained. The high cost of infrastructure repair or replacement has impeded efforts to buy and preserve the parks. Board member Stephanie Klinzing asked about lot rental prices. Kaplan noted that they range from $200 to $600 per a month. Klinzing then stated that there wouldn’t be a solution to the park situation until there is agreement among stakeholders that this is an important housing supply. Kaplan said that current efforts in support of parks may help create the needed traction for change, and people will pay attention because of the extraordinary tenant organizing that is occurring.

Tingerthal said that the board will hear updates on several new investment opportunities at its September board meeting. The board will review and be asked to provide concept approval for Greater Minnesota Housing Fund’s NOAH Impact Fund (to preserve unsubsidized affordable housing). The board also will review progress with the Twin Cities Habitat multi-year funding plan. Tingerthal noted that both of these initiatives provide ways for Minnesota Housing to leverage its investments.

Stay tuned to the MHP Connect blog for monthly updates from the Minnesota Housing board meetings.