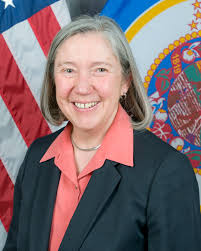 At the monthly board meeting of the Minnesota Housing Finance Agency, Commissioner Mary Tingerthal (pictured right) updated the board on new tax credit legislation, the Wells Fargo LIFT program and recent press concerning artist housing. The board also approved the Agency’s 2018 Qualified Allocation Plan (QAP), which includes new scoring criteria for Indian Reservations and process changes for developer applicants. Agency policy staff updated the board on the results of the tumultuous 2016 Legislative Session and the board discussed a $4 million request from Habitat for Humanity for its newly minted home purchase program. Read more below.

Chair John DeCramer opened the meeting with a tribute to board member George Garnett who unexpectedly passed away recently.

Commissioner Mary Tingerthal started her updates with enthusiasm for a bill introduced in Congress by Senator Maria Cantwell that would increase the housing tax credit program by 50%. Tingerthal said this bill’s introduction represented a move in the right direction after many years of playing defense. Tingerthal also spoke positively about neighborhoods in Minneapolis and St. Paul being selected for the Wells Fargo LIFT program, which allows home purchase borrowers to receive $7,500 in down-payment assistance from Wells Fargo and those resources can be coupled with entry cost assistance available from Minnesota Housing .

Tingerthal also noted a report co-authored by Myron Orfield (and highlighted in related news articles), which castigates public investment in artist housing. She said that the focus of the Orfield report was on two expensive historic rehab developments but created the impression that all artist housing is expensive and segregated. Tingerthal pointed out that Minnesota Housing had not invested in these two projects because of their high cost, but years ago had provided some financing for a modest development that was targeted for low-income artists.

Tingerthal updated the board on a change of direction regarding the Agency’s role in the Homeless Management Information System. Because a new vendor has been selected by Continuum of Care organizations, the Agency will not have the lead role it had planned to in overseeing Minnesota’s HMIS. Because of this change, Minnesota Housing will dissolve the HMIS advisory task force it formed in early 2015.

The board gave approval to the revised 2018 Qualified Allocation Plan (QAP), governing the allocation of federal housing tax credits. Program director Kayla Schuchman stated that, in response to comments, the Agency made three modifications to the 2018 QAP.

Board member Rebecca Otto said that she appreciated the support for large-family apartments in the new QAP and hoped that, in the coming year, the Agency will investigate recommendations for enhanced energy efficiency and promoting super-long term affordability. Board member Terri Thao endorsed the new definition of homelessness linked to tribal experience and said 50-year affordability is an interesting idea deserving further research. Board chair DeCramer added that he appreciated the Agency addressing the complexity of the LIHTC process.

Agency policy staff Ryan Baumtrog and Katie Topinka provided the board a summary on how housing fared in the recently concluded 2016 state legislative session. The final bonding bill agreement, which failed to meet the deadline, would have provided the Agency $35 million in housing infrastructure bonds and $10 million in general obligation bonds (for public housing rehabilitation). The tax bill that passed did not include any of the proposed tax credits for workforce housing, nor did it include TIF provisions that would have impacted use of pooled TIF or increased incomes for housing districts.

Regarding appropriations, the Agency will receive $250,000 to create risk mitigation reserves available to owners that rent to higher risk tenants; administration of this pilot program, the Landlord Incentive Fund, will be through the Family Homeless Prevention and Assistance program. Another $500,000 will provide rent assistance connected to victims of gender-based violence, for example, forced marriage or domestic abuse. $750,000 will be available to support homeownership (including infrastructure improvements in manufactured housing parks), and $500,000 will go to the family stabilization program of Build Wealth Minnesota, which is focused on preparing households for homeownership.

Policy changes passed by the legislature include increasing the age within the definition of homeless youth from those under 22 to those under 24 years of age, and making Indian tribes eligible to administer the Family Homeless Prevention and Assistance program. Finally, the fees for contributions to the manufactured housing trust fund will increase from $12 to $15 per unit, and the benefit to owners in  parks that close in the future will also increase.

The final topic of discussion concerned a proposal from Twin Cities Habitat for Humanity for a four-year advance commitment of Pool 3 (Agency foundation) funds, $4 million total, to support the organization’s new home purchase financing program. This would enable the metro Habitat chapter to double its annual production, increasing to about 100 homes per year. Staff wanted the board’s reaction to this type of commitment, and added that the Agency would not release funds until other funding partners commit and there is demonstrated demand for the program.

Board members expressed support for the Twin Cities Habitat proposal but wanted assurance that the program will still serve households whose religious beliefs restrict the payment of interest, because the Habitat program is one of the few that has worked for Muslim families. They also wanted assurance that Greater Minnesota Habitat chapters would not be harmed. Tingerthal responded that the metro Habitat has been meeting for some time with Islamic leaders to ensure the eligibility of families whose culture restricts use of interest-bearing debt.

Regarding Greater Minnesota chapters, Tingerthal said that under the new arrangement Twin Cities Habitat would not be eligible to access funds in the current Habitat Minnesota loan pools during the four-year period of the new arrangement.  As a result of this restriction, it is projected that Greater Minnesota affiliates will have sufficient access to funds from the existing pools. Board member Terri Thao said that she knows private foundations were wrestling with Impact Investment proposals for this and other programs and considering how that might impact their grant making. Tingerthal said that Sunrise Bank will be the loan origination partner for Twin Cities Habitat and that 90% of those on Habitat’s waiting list are households of color.