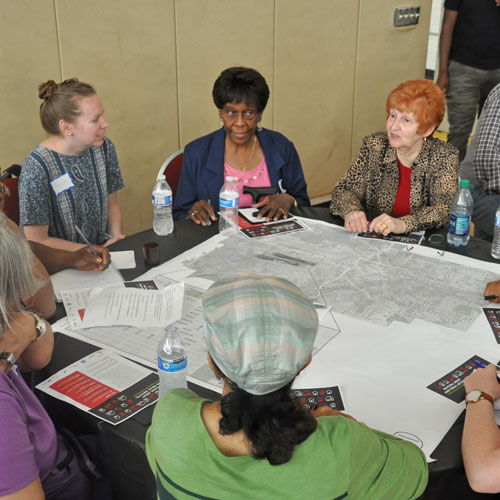 For Greg McMoore, 4th Avenue in South Minneapolis is more than a line on a map; it’s a thread in his family’s history.

Last week, McMoore was among nearly 200 participants who launched the “Racism, Rent and Real Estate: Fair Housing Reframed” series with a unique event focused on adding a tapestry of personal memories to a unique mapping project that connects past racist policies to current challenges around housing equity.

Co-hosted by Sabathani Community Center and Mapping Prejudice, “Mapping Neighborhood History: Reclaiming & Reframing Fair Housing” acknowledged that the way our neighborhoods look and feel today are a product of our shared history; one shaped by racist policies that barred households of color from homeownership and wealth accumulation for many years. It invited residents to learn more about the history and impetus of fair housing laws, and share knowledge about the history of their family and neighborhood.

After introductions from Cindy Booker, Sabathani’s Executive Director, and Andrea Jenkins, Minneapolis Councilmember for the 8th Ward, Kirsten Delegard set the stage for the night’s activity by explaining the work of Mapping Prejudice. “We’re making a new kind of map,” she explained. “This map will make structural racism visible. It will serve as a window on the histories of racism and white privilege that have been willfully forgotten by many people in Minneapolis.” 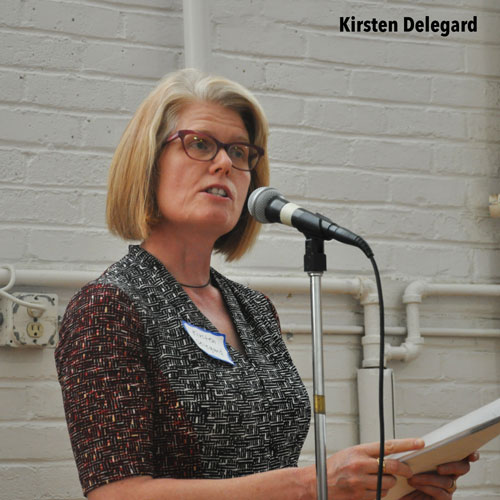 “But these histories have never been forgotten by those connected to Sabathani Community Center,” she continued. “We are documenting what many of you already know. First, that racist housing practices pushed people who were not white into certain neighborhoods. This includes the old Southside where we are tonight. And second, these same practices made it very difficult for people of color to buy homes and pass them to the next generation. Our goal is to connect this history to our contemporary challenges with housing, the wealth gap, with racial disparities.”

The leaders at Sabathani Community Center, Delegard emphasized, recognize that communities need history. “That’s why they have been building the community history room on the second floor here,” she said. “It’s why they have been working to document the stories of the people who have made up the Sabathani community.” And it’s why they partnered with Mapping Prejudice to surface community knowledge that can overlay personal history and stories of community resilience on the scars of racial covenants and redlining.

To model the activity, Delegard invited up Greg McMoore, a lifelong resident of south Minneapolis with family roots in Minnesota dating back to the 1890s. After graduating from Macalester College, McMoore’s professional highlights included The Village Foundation, a Washington D.C., non- profit whose mission was to “Repair the Breach” between African-American men and boys; the Wilder Foundation’s St. Croix Camps, a residential therapeutic center for adjudicated youth; and the Amicus program, whose work is dedicated to the transition of incarcerated individuals from within the Minnesota prison system back to society. 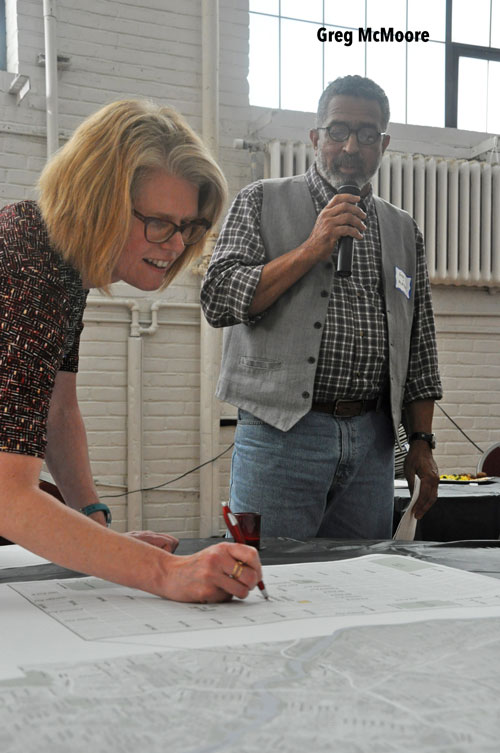 With Delegard annotating a large map, McMoore explained that his family’s history had deep roots all along 4th Avenue, from Lake to 46th streets. “For my generation, that was the place to be,” he reflected.

“The first stop would be Central High School, which was the backbone of the community,” he said. “Our families were centered there. We all went to school there.” Even Prince graduated from Central High School. When the school was shuttered in 1982, “it was devastating.”

Beyond education, the black economy was strong on 4th Avenue, as well. “We had our own business community on 38th and 4th, where there were record stores, barber shops, shoe stores, grocery stores, laundromats and the Minnesota Spokesman-Recorder office [African American newspaper],” he added. “On the weekends, that’s where we’d all commune. If you went a little bit further, there was the social club called the Nacirema. I know some of the older folks know about the Nacirema, because I see the big smiles on your faces.”

Of course, the spiritual life of the community revolved around the church. “Another strong piece of this neighborhood was the church,” McMoore continued. “My church is the St Peter’s AME [African Methodist Episcopal] Church at 41st and 4th, which has been in the community since 1885, I believe. Very socially and politically active church. And our church is located in an area that’s a historical site: the Tilsenbilt Homes.”

In the history of fair housing, the Tilsenbilt Homes were of special significance. According to the City of Minneapolis: “In 1953, following the success of several early integrated housing projects in other parts of the country, the FHA and the Minneapolis Urban League met with several African American realtors in an attempt to encourage a pilot interracial home-building project in Minneapolis. Realtor Archie Givens committed himself to the project, identifying a location for the project, recruiting builder Edward Tilsen, and helping to secure financing. Givens identified a collection of scattered lots owned by Mike Kelley, former owner of the Minneapolis Millers. At the time, East 42nd Street was generally the southern boundary of the large black community centered on the intersection of 4th Avenue South and East 38th Street. While the area located north of East 42nd Street had one of the highest black populations in the city, the area to the south, where many of the lots were located, was nearly all white. Tilsenbilt Homes, constructed a total of 52 homes as part of the project, approximately 90% of which were sold to African American or mixed-race buyers.”

That’s not to say that racist policies and disinvestment haven’t had a devastating impact on the community, McMoore noted. In the late 1980s when McMoore was living and working in Washington, D.C. he perked up when he heard mention of his hometown on the local news. “They said there’s this street in Minneapolis called 4th Avenue that’s now known as crack avenue,” he recalled. “Once the school went, a lot of the families left the neighborhood and Central neighborhood went on a downward spiral. But I think one of the wonderful things about this neighborhood is that resilience. This is a resilient place to live.”

And McMoore isn’t going anywhere. “This is my home,” he said. “I live in the home my aunt purchased in the 1940s on 4th Avenue and I suspect I’ll die in that home. I have a lot of fond memories. I love the south side and we’re here to stay.”

Following McMoore’s lead, participants poured over large maps and spent more than an hour sharing their personal and family histories in the Central neighborhood and across the city. As conversation filled the gymnasium, facilitators captured memories on notecards and taped them to the margins of the newly enlivened maps.

See more photos from the event here — and stay tuned for updates on the results of the memory mapping project, which will be housed at Sabathani Community Center.

Read a story about the event and the series from the Minnesota Spokesman-Recorder: How racist was your neighborhood?

Learn more and sign up for updates on the “Racism, Rent and Real Estate: Fair Housing Reframed” series here.