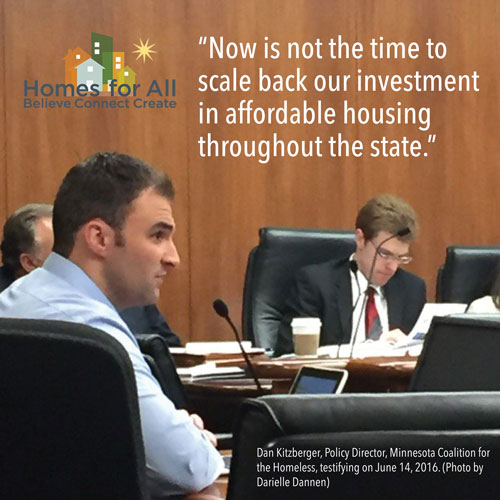 The slow simmer of political intrigue around a special legislative session continued this week with a packed committee hearing at the Capitol in St Paul.

Along with our partners in the Homes for All coalition, MHP was  on hand as the Capital Investment conference committee heard testimony on the bonding bill Minnesota legislators failed to pass in the chaotic close of the session last month. While the Governor has made certain investments a prerequisite for the special session, we were heartened to be able to share the urgency around bond funding for affordable housing during the hearing.

Dan Kitzberger, Policy Director at the Minnesota Coalition for the Homeless, shared with committee members the potential cost of inaction: $125 million in affordable housing development costs across the state.

“Thank you, Mr. Chair, and members of the committee. I’m Dan Kitzberger with the Minnesota Coalition for the Homeless and a proud former student of Mayor Beussman from New Ulm. Today I’m here on behalf of Homes for All, a statewide campaign of more than 180 organizations.

As you’re aware, this session Homes for All advocated for $130 million in bonds for affordable housing. HF622 included $45 million and we thank you for that commitment. As negotiations continue, and if it’s determined the bill needs to change, we ask that you consider including the Governor’s recommendation and the Senate position of $90 million: $70 million in Housing Infrastructure Bonds and $20 million in General Obligation Bonds.

As we speak, developers throughout the state are finalizing applications for Minnesota Housing’s Multifamily RFP [Request for Proposals], for which the deadline is this Thursday and will include Housing Infrastructure Bond proceeds. We’re anticipating the demand will again far-exceed available resources, as it did in 2014, when applications were three times the amount of available funding.

What would the $90 million [in bonding] buy? This amount would impact 3,500 units of housing statewide. The $70 million in Housing Infrastructure Bonds would leverage an additional $55 million in private and federal sources, resulting in $125 million of total development costs. We’re proud of Minnesota Housing’s ability to leverage available funding, as well as continuing to make sound investments in both preservation and development in the state’s affordable housing stock. For example, the Agency’s underwriters require applicants to demonstrate adequate capitalization to maintain and repair developments decades into the future. What’s more: The skilled ranks of developers throughout the state are routinely able to meet this requirement.

We hope by now you’ve heard about the growing need for housing that’s affordable — maybe even from your district. In fact, 600,000 households statewide are considered cost-burdened by their housing. It’s up to you to decide how far you want to go in meeting these needs.

Now is not the time to scale back on our investment in affordable housing throughout the state. We recently learned there’s been a 9% decrease in homelessness since 2012; the first drop in a decade. We’re on pace to end veteran homelessness by the end of this year. This challenge is solvable and we’re making progress. We hope you’ll choose to continue it.“