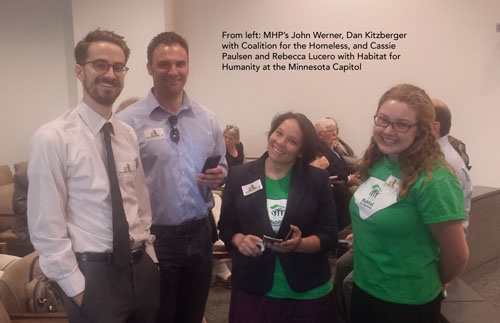 The looming threat of housing projects failing. The continued loss of affordable units. The prospect of missing out on federal money. And the upcoming elections in November.

When the Minnesota state legislature convened on a cold afternoon in March, we hoped all those pressing factors would compel elected officials to act. But, as the weeks rushed by, our hopes for a productive session faded.

As part of the Homes for All campaign, the Minnesota Housing Partnership supported $130 million dollars in bonds for housing, specifically $110 million in housing infrastructure bonds and $20 million in general obligation bonds. These bonds would support home ownership as well as preservation of existing homes. The bill would also expand the eligible uses for these fund to include senior housing.

Unfortunately, after a flurry of last-minute confusion and chaotic deal-brokering, the legislature adjourned without passing a bonding bill. Still, by advocacy standards, the Minnesota Housing Partnership had a great year.

We met with more than 70 elected officials on both sides of the aisle and rallied hundreds of emails and phone calls to lawmakers to emphasize the urgency of increased affordable housing for so many Minnesotans. We garnered Republican support for a second bonding bill in the Senate and, with your help, we were able to stop cuts to the Challenge fund and win funding for:

While we didn’t secure bonds for housing, I’m proud of the work we did accomplish.

The session was as unpredictable as the Minnesota weather, but deep down, I sensed that the need was so great that surely we’d get a bonding bill passed. The policy team was at the Capitol on the final day of the legislative session and we started hearing that a bonding bill would hinge on securing a deal on a controversial transportation issue We knew that was bad news because it likely meant there would be less money spent on housing. The rest of the day we tried to track down our supporters, stressing the importance of housing, and identify other legislators who were influencing the negotiations.

Unfortunately, the negotiations were confined to a few legislators in leadership. But, fortunately, MHP’s legislative strategy to bring our supporters to the Capitol to meet with their legislators worked. Your stories about the need for affordable housing ensured legislators signed on early in the session to support our bonding ask. In the sprint to the finish, legislators stayed committed to the inclusion of housing in any bonding deal. The issue in question? How much money would they include.

By the afternoon, the news broke that there would not be a transportation bill and that negotiations would move forward on the bonding bill.  While this was disappointing for our transportation allies, it did improve our chances of having a bonding bill. By late afternoon, rumors circulated that an agreement on bonding had been reached. No one knew the numbers but the pace started to pick up.  Finally, spreadsheets were released from the House that showed the agreement had $35 million for Housing Infrastructure bonds and $10 million for general obligation bonds.

As the clock moved toward midnight and the adjournment deadline, the storm rolled in. With about 30 minutes left in the 2016 regular session, the House took up the bonding bill. In the rush, there was little time to review the details of the bill. With minimal debate, the bill passed the House with just 15 minutes left in the session. The Senate took up the bill and immediately brought up that white-hot transportation issue: the lack of funding for the Southwest light rail. Quickly, an amendment was added to include this funding.

Within a matter of minutes, the storm had come to a head. The Senate’s amendment meant that the bill had to go back to the House to be voted on again. There were only a few minutes left before midnight but in theory the bonding bill could be passed. That is, if the House was in session. Word of the amendment reached the House and the Minority leader motioned that the House would adjourn, meaning no vote on any additional bills. The motion passed, the House adjourned and just like that the chances of passing a bonding bill were extremely slim. The Senate debated whether to remove the amendment from the bonding bill but the midnight deadline was reached and the Senate was forced to adjourn.

When the sun rose the next day, there was no bonding bill. Both the Senate and House have asked the Governor for a special session but neither side has mentioned where they would compromise to make a deal on bonding a reality. As of June 2, there is no special session scheduled. Earlier this week, the Governor released a list of what he would need to be in a bonding deal in order for him to call a special session. Neither the Speaker of the House or Senate President have said they are willing to make all of these concessions and we are currently waiting for negotiations to resume between the parties.