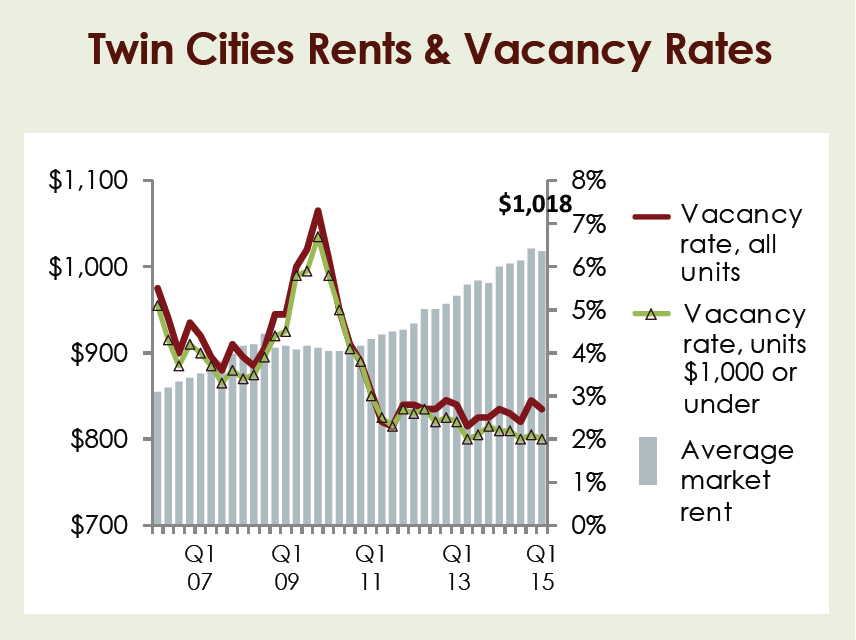 MHP’s June 2015 2×4 Report, released today, found that low rental vacancy rates and rising rents have led to competition for lower-priced units, at least in the Twin Cities where regular data is available. Minnesotans with low incomes are at greatest risk in this tight rental market.

According to data in the report, the overall rental vacancy rate for market-rate units was 2.7%. But for those renting for $1,000 or less, only 2.0% of units were vacant in the first quarter of 2015.* To afford an apartment that costs $1,000 per month, a family would need to earn $40,000 to avoid paying 30% or more of its income for housing, the federal standard for housing affordability.

With rising demand for rental units nationwide and in Minnesota, housing construction in the state is beginning to rebound, particularly for multi-family units, the report found. Through May of this year, 7,000 units were permitted statewide, the highest since 2006. Of these units, a record 39% were multi-family units.

While new construction could help ease rental vacancy rates over the long term, thousands of Minnesotans facing homelessness may not benefit from much of the new construction. Financing lower-cost apartments is a challenge for developers.

“Even when developers want to build rental housing that lower-income people can afford, land, labor, and other costs make breaking even impossible without additional public investment,” said Chip Halbach, Executive Director of MHP. “Minnesota is a leader in using state resources wisely for affordable housing, but available public funding assists only a small fraction of Minnesotans living on the edge,” he added.

Homelessness indicators in the report found a reduction in homelessness since last year, but numbers are still notably high. Through March of this school year, about 8,000 children were identified across four major school districts as being homeless at some point.

Also in the report are data on home sales prices and supply of homes for sale in the St. Cloud, Brainerd/Baxter, and Twin Cities metros, as well as evictions, mortgage delinquencies and pre-foreclosure notices statewide.

You can view the full 2×4 Report and add to the conversation on Twitter using #2x4Report and @FollowMHP.