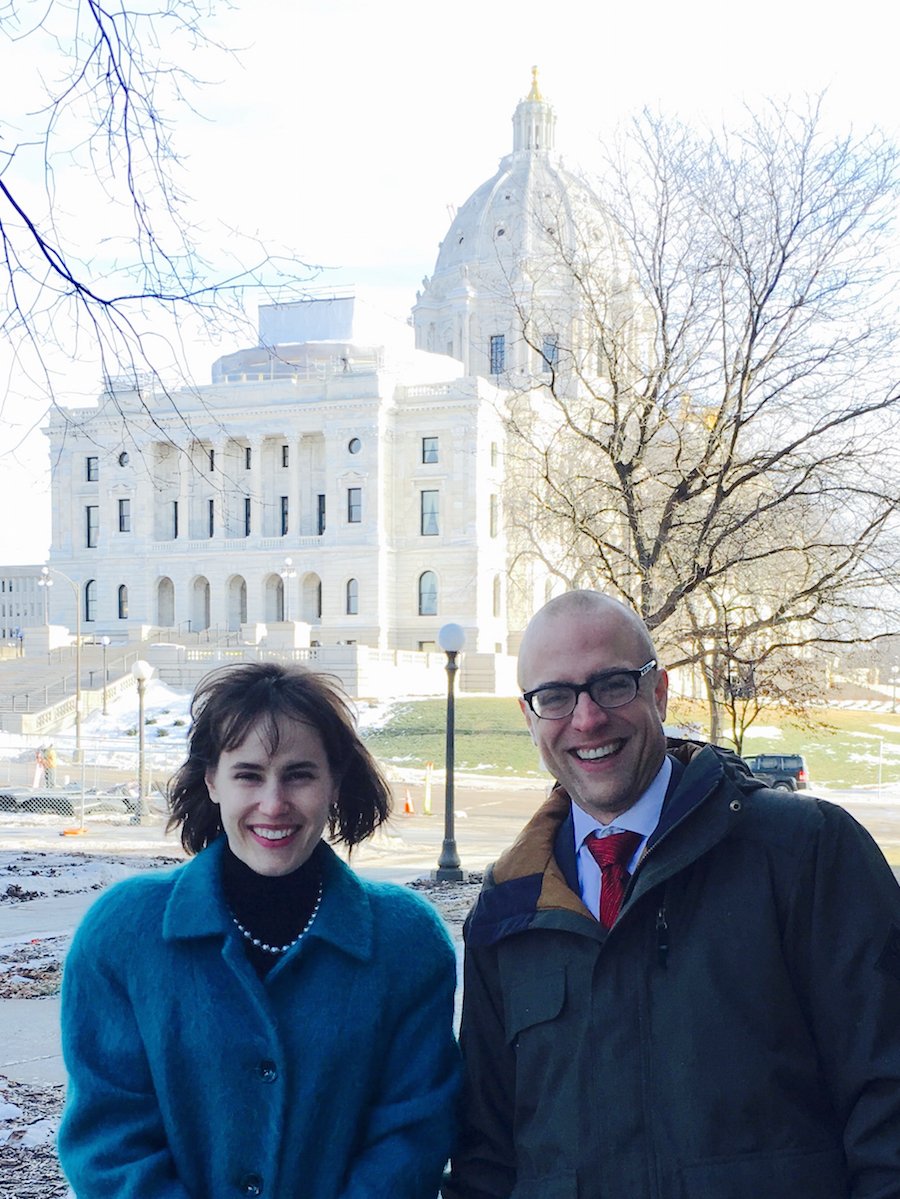 Hello from the Capitol! We’re only a few weeks into the legislative session, but with the unseasonably warm weather and fast pace at the Capitol, it feels later in the year. Last year’s bonding bill is being heard in the Senate this week and we’re hustling from committees to meetings to make sure every elected official knows the importance of homes for all.

Building relationships: While few bills are moving yet, the Policy team has been hard at work setting up meetings and building the relationships we’ll need when things heat up. We’ve reached out to every new lawmaker and already had more than a dozen meetings. We’ve also sat down with some key leaders in the House and Senate. Over the next few weeks, we’ll shift our focus from education of freshman legislators to meeting with key committee members to advocate for the bonding bill.

Bonding bill update: There’s still no consensus on whether a bonding bill will pass this year. But after encouraging meetings on both sides of the aisle, we have no reason to be pessimistic — though we’ll need to push hard to make sure housing is a priority. The Homes for All coalition has secured Sen. Senjem to be the chief author of its bonding bill for $100 million and is working to secure a House sponsor. Sen. Senjem also has introduced SB 210, a bonding bill that includes $45 million for housing and is very similar to the compromise bonding bill from the end of the 2016 legislative session. This bill is being heard in the Senate Capital Investment committee this week and has bipartisan support. We’re optimistic it will pass the Senate.

Governor’s budget: The Governor’s budget proposal, released today, invests $10 million across Minnesota’s Housing Continuum. This is a good start at the beginning of session, but we know the need for affordable housing is critical throughout Minnesota. Homes for All’s budget request includes $30 million for programs to prevent and end homelessness, increase the supply of affordable housing and help first time homebuyers across the state.

Local Housing Trust Funds: One of our priorities this session is clarifying and encouraging Local Housing Trust Funds, which provide a consistent, flexible resource for the development of affordable housing within a local jurisdiction. Thus far, the idea has been very well received. A number of Minnesota cities are currently looking at establishing housing trust funds and are very excited about the possibility of a state matching fund — and legislators have been supportive of the concept, too. Draft legislation coming soon.

Election and tax reform: Since the election of Donald Trump in November, there’s been plenty of speculation on the possible negative impacts on the affordable housing market. Chief among the concerns is that tax reform will lessen the incentive to invest in the Low Income Housing Tax Credit (LIHTC). Unfortunately, we’ve already started to see projects in Minnesota need additional gap financing. The other cause for concern is President Trump’s plan to cut non-defense discretionary spending by 1 percent each year for 10 years. This cut could have devastating impacts on those receiving — and those in need of — housing assistance. Trump’s appointee for HUD Secretary, Ben Carson, testified in his confirmation hearing that he would implement Trump’s plan.

Speaking of Ben Carson… In his Senate hearing this month, Secretary Carson’s testimony focused on the link between housing and health, regulatory barriers to affordable housing, and the role of the federal government in promoting economic mobility. He acknowledged the critical role of federal housing programs but stressed the need to look for greater efficiencies and a more holistic approach to addressing poverty. If confirmed, he plans to organize a listening tour to hear from practitioners and advocates. Carson confirmed that the Fair Housing Act “was one of the best pieces of legislation” and he will enforce the “laws of the land.”

United for Homes: The National Low Income Housing Coalition (NLIHC) hosted a webinar to kick off the 2017 restart of the United for Homes Campaign, an effort to fund housing programs benefiting extremely low-income renters through the restructuring of the federal mortgage interest deduction (MID). Currently, Rep. Keith Ellison (MN-5) is circulating a “Dear colleague” letter to be delivered to the leadership of the Ways and Means committee, asking committee leadership to direct any savings from reducing or eliminating housing tax benefits (such as MID) through federal tax reform to housing programs serving low-income people. Both NLIHC and Rep. Ellison see a new opportunity to fund housing programs since major tax reform is a priority for both Congress and the Trump administration.