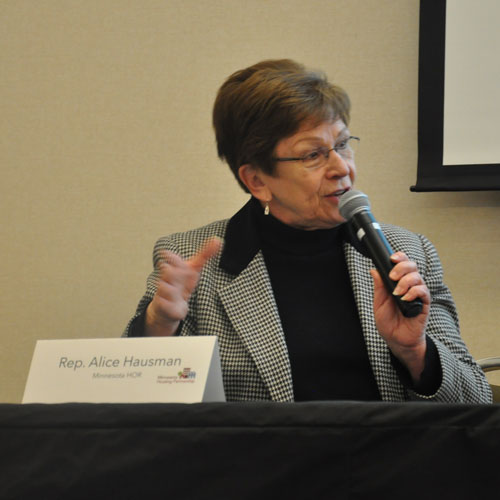 On February 14, more than 100 housing industry leaders and advocates convened at MHP’s latest Investors Council breakfast to discuss prospects for housing policy at the state legislature during the 2017 legislative session.

Housing developer Skip Duchesneau of D.W. Jones kicked off the event with a presentation on the impact of affordable housing investments in Greater Minnesota. Duchesneau highlighted the Beacon Hill housing complex — 48 units of affordable workforce and supportive housing located in Grand Rapids, Minnesota.

Duchesneau explained that the success of the Beacon Hill project was due, in large part, to the collaboration and vision of a variety of stakeholders from county and state corrections to housing and mental health services. The team responsible for the project convened to undergo training and receive guidance through MHP’s Housing Institute in 2013. With dedication and 41 team meetings, the group broke down silos between their respective organizations to successfully house more than 120 people.

Beyond strong partnerships and perseverance, however, Duchesneau emphasized that bonding was fundamental to completing the project. “If it was not for Housing Infrastructure Bonds, Beacon Hill would not exist today,” Duchesneau said.

Bonding was a major topic of conversation in the panel discussion following Duchesneau’s presentation. Although 2016 was a bonding year for Minnesota, legislators failed to pass a bill. Because bonds are a critical resource for housing and other infrastructure development around the state, the pressure is on for the 2017 legislature to make bonding happen. The Senate Capital Investment Committee has already heard a bonding bill (SF 210) that would provide $35 million in Housing Infrastructure Bonds and $10 million in General Obligation bonds. Committee Chair Sen. David Senjem (R) has made it clear that he’d like to pass a bill early in session. 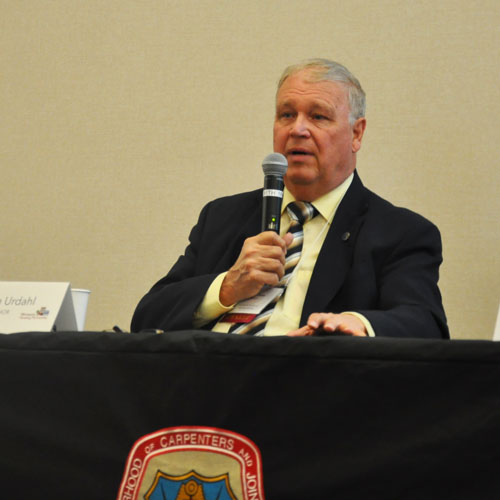 Bonding is proceeding more slowly in House of Representatives, however. Rep. Urdahl (pictured right) chairs the House Capital Investment Committee, which is the committee that will hear bonding requests. During the panel discussion, Rep. Urdahl said that passing a bonding bill is a priority for his committee, though he could not give a definitive timeline. “It is my intention that a bill will be done as soon as possible,” Rep. Urdahl said. “There are different definitions of possible. Therein lies the problem.”

Rep. Alice Hausman, lead DFL member on the Capital Investment Committee, explained that bonding bills become harder to pass when individual entities seek funding from the legislature independently. She acknowledged that, in the 2017 session, many entities have a good argument for legislators. No bonding bill last session means that a number of projects are at risk of losing the 2017 construction season. However, the more entities that take this approach, the more difficult it is to pass a bonding bill. A legislator loses the incentive to vote for a bonding bill when critical infrastructure projects in their district have already secured funding.

Rep. Hausman said that to pass a bonding bill in the 2017 session, legislators and advocates must work to keep projects packaged together and to ensure that all regions are treated fairly.

Rep. Urdahl pointed out that, when it comes to passing a bonding bill, legislators must take a broad view. “You have to vote for what you think is good for the whole state,” Rep. Urdahl said.

Rep. Hausman said that the House has a dangerous habit of using large bills — such as the bonding bill — as leverage. “[That’s] when we make mistakes and run out of time,” Hausman said. “If we pass [the bonding bill] early, we get the public’s vote.”

Affordable housing: An issue across Minnesota 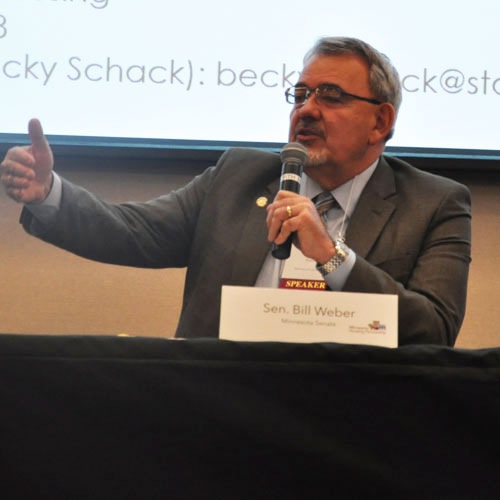 Senator Weber (pictured right) and Commissioner Tingerthal both underscored the growing need for affordable housing across Minnesota. Senator Weber — who also works as a real estate appraiser and broker in Luverne, Minnesota — emphasized the shortage of housing in his district. In a town of 4,700, less than 20 homes are on the market and rental housing is also scarce. And Weber said he understands that the need for housing goes beyond Luverne.

“We recognize that need in urban Minnesota, too,” Weber said. “It’s our goal to address all of the [housing] needs across Minnesota.”

“Both our appropriations dollars and our proposal for bonding are sorely needed,” Tingerthal said. “We have two times the number of solid [housing development] proposals than we can actually fund.”

Advocating for housing at the legislature

In the question and answer session following the panel, MHP Executive Director, Chip Halbach, pointed out that less than half of one percent of the state budget goes to Minnesota Housing for housing programs. Halbach asked the panelists how advocates can help legislators better understand housing programs and the need for additional affordable housing resources.

Rep. Hausman responded that, to a legislator unfamiliar with housing, the $100 million bonding request might sound ambitious. For this reason, Hausman emphasized the need for affordable housing industry leaders and advocates to “tell the stories of housing dilemmas in your communities.”

By the conclusion of the event, 50 event attendees had agreed to take steps to educate legislators and advocate for housing by heading to the capitol with the MHP policy team, writing a letter to the editor, or providing support for advocacy in some other manner.