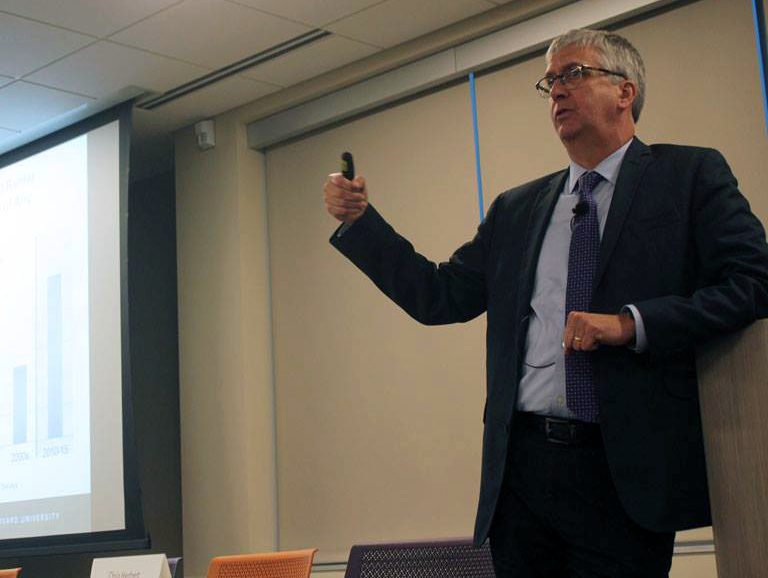 What are the dynamic trends shaping the nation’s housing markets, and how do the Twin Cities stack up?

On November 1, nearly 100 Investors Council members convened to hear a special presentation on these questions by Chris Herbert, Managing Director of the Harvard Joint Center for Housing Studies. Herbert highlighted key trends from the annual “State of the Nation’s Housing” report, released in June. Here are six takeaways from Herbert’s presentation:

1) While there’s been significant growth in renter households over the past 10 years, that growth is now slowing. 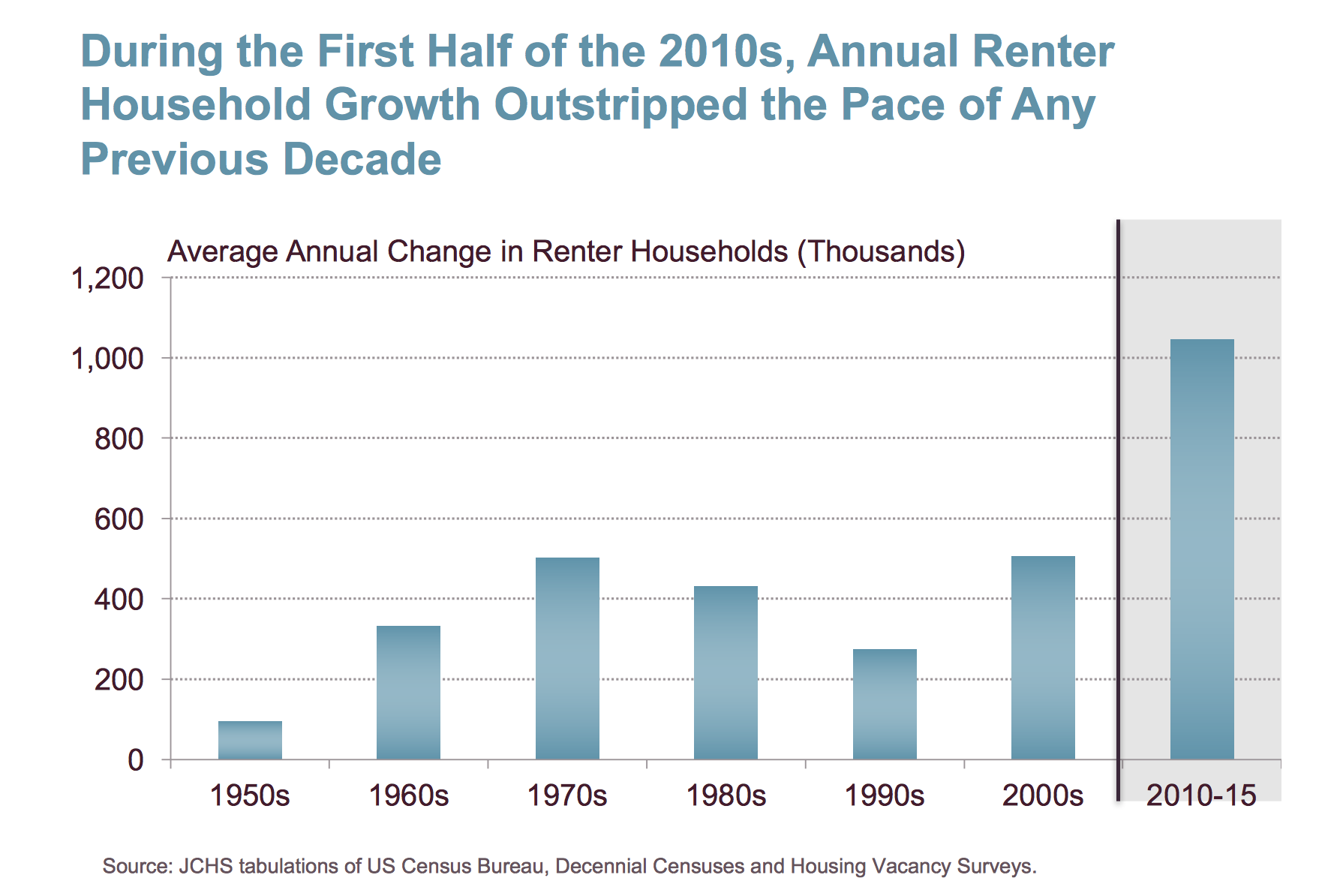 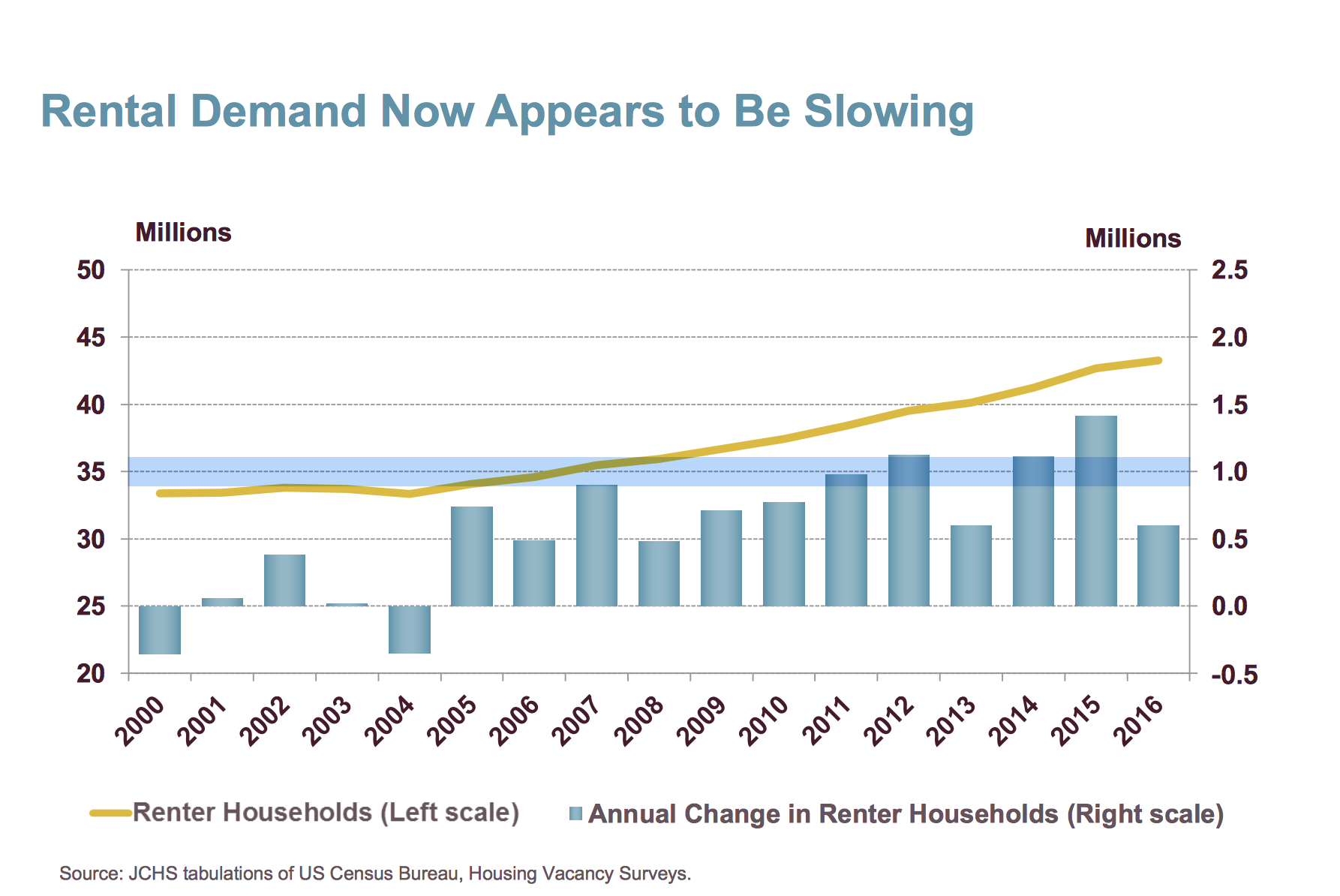 2) Consistent with the national trend, multifamily construction appears to have peaked— specifically at the high end of the market — since recovering from historic lows during the recession.

Post-recession, the multifamily construction market saw a more robust recovery than the single family market. In the past five years, though, the majority of new multifamily units were renting for $1,500 or more. That’s much higher than 2005, when the majority of units rented in the $850 to $1,099 range. While demand is slowing at the high end of the market, demand for older, more affordable rentals continues to rise. 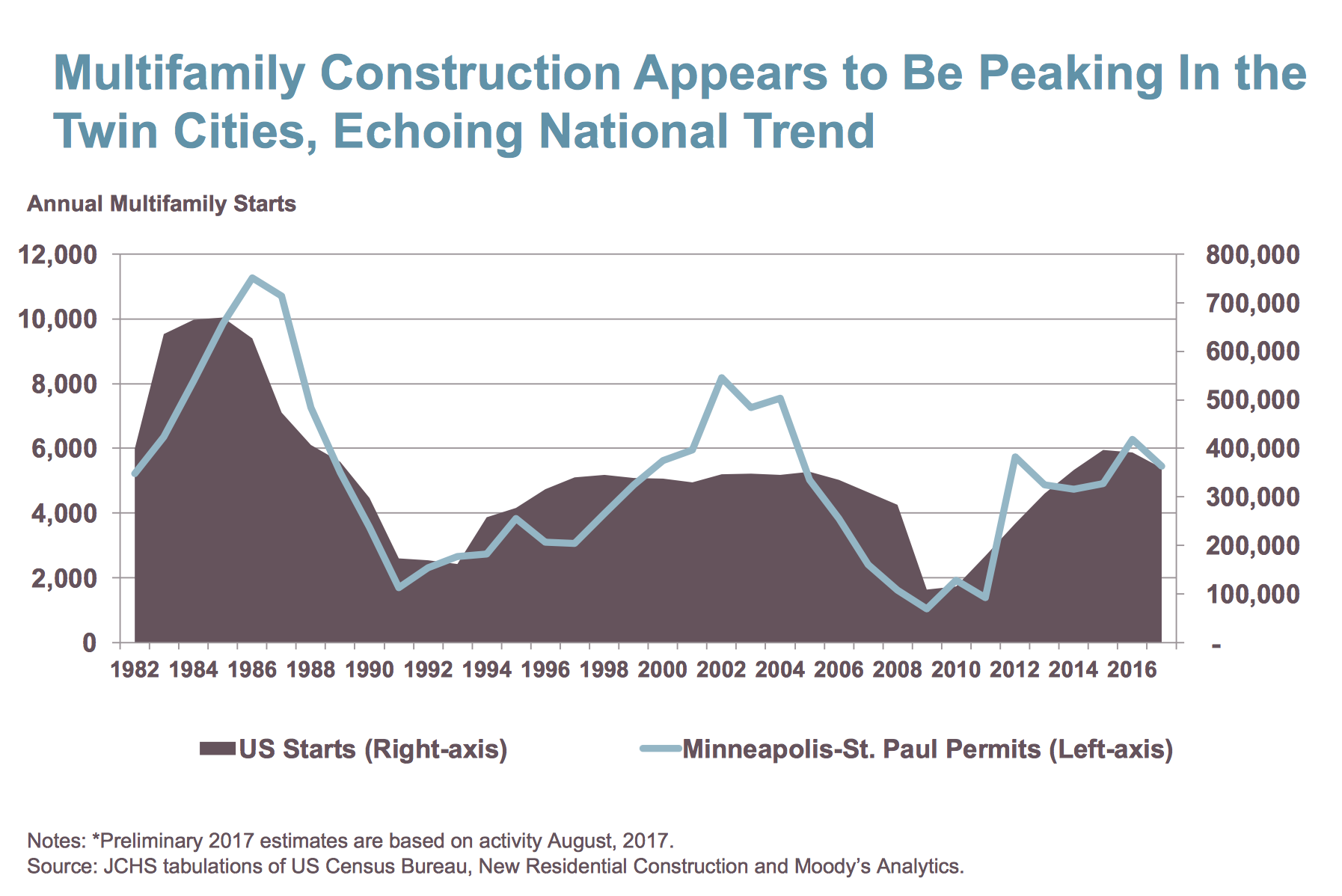 3) Though rental affordability is improving slightly nationwide, the number of renters paying more than a 30% of their income for rent remains near record highs.

In the 2000s, the percentage of cost-burdened renters rose at a record pace — to record high levels. Why? According to Herbert, housing costs have increased sharply while incomes have declined. Middle-income renters have been hit hardest, seeing the biggest increase in households paying more than 30% of their income for rent. Minneapolis reflects national cost-burden trends, and while the city has more subsidized rentals than similar cities across the country, there’s a significant shortage of affordable unsubsidized units.

Herbert emphasized that the housing sector must create “a long vision of how we’re going to maintain affordability over time” and take steps now to address the gap between wages and rent. 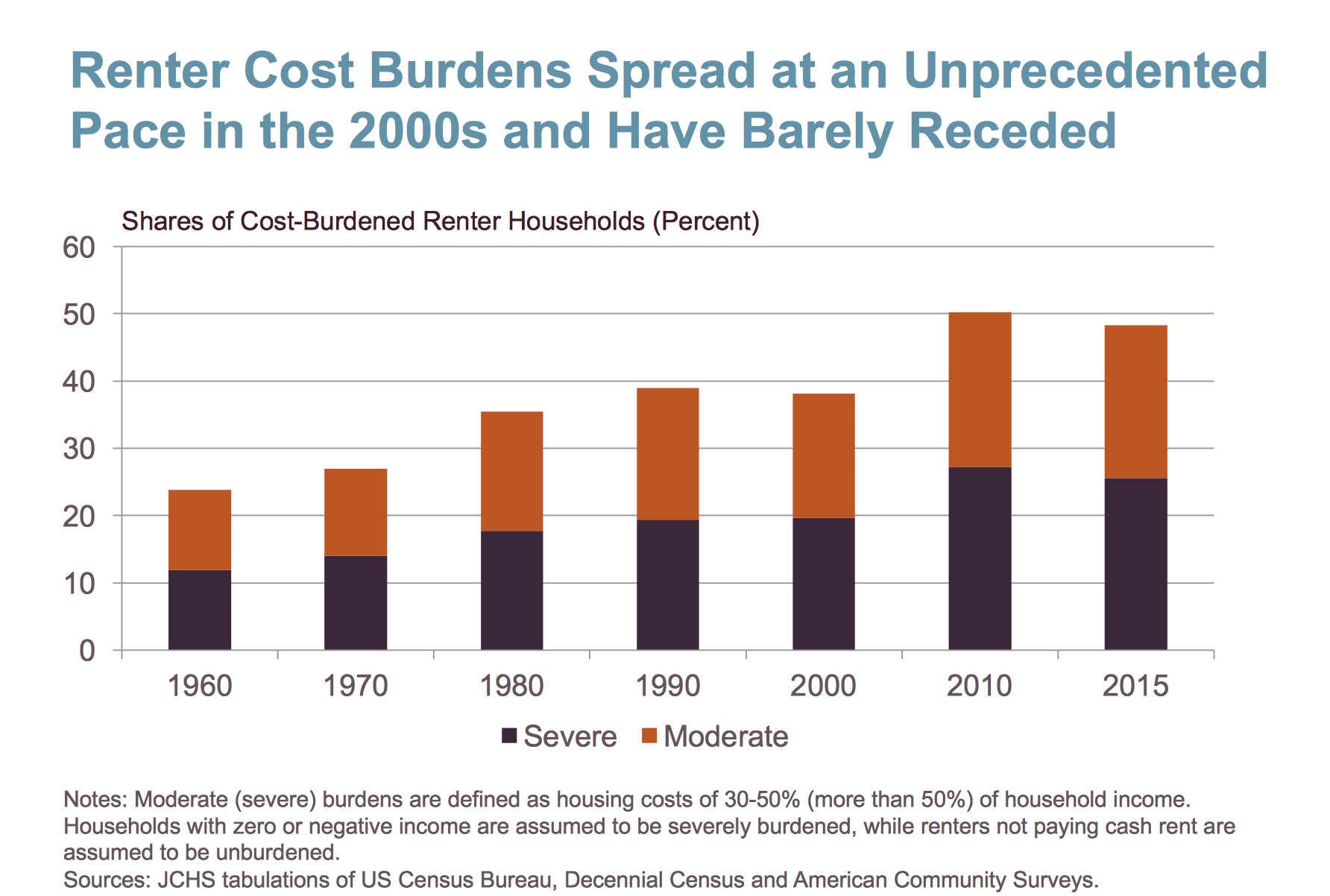 4) Because renter growth is slowing, the falling national homeownership rate may have reached its lowest point.

The recession and foreclosure crisis have driven a steep decline in homeownership. Since 2015, the homeownership rate nationwide has hovered around 63.5 percent compared to more than 69 percent in 2005. From 1990s levels, homeownership among households under 55 has plummeted as much as eight percentage points. However, according to Herbert, it appears that the rate of decline is slowing. At the end of October, one source reported a homeownership rate of 63.9 percent. 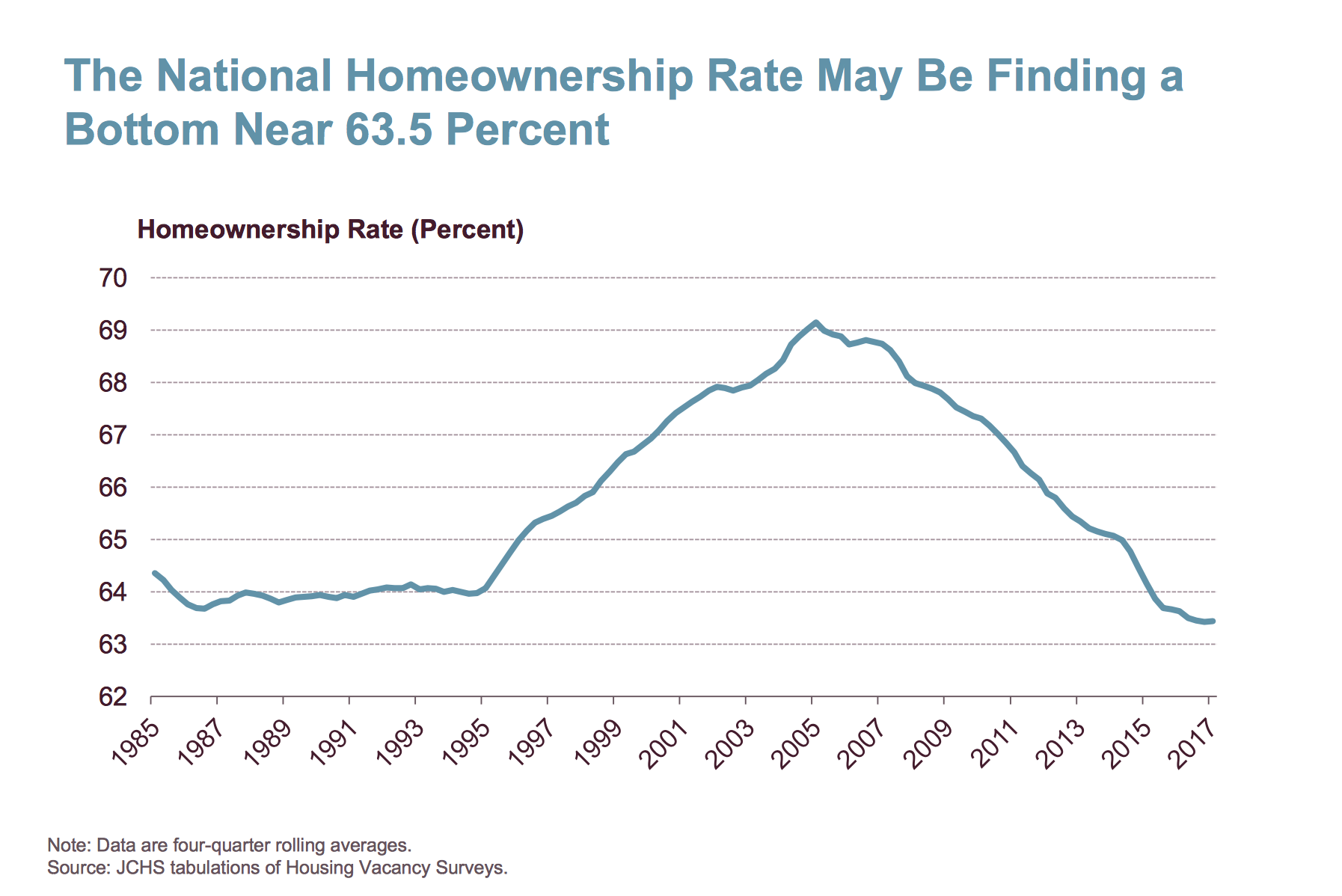 5) Despite a rebound in the homeownership rate, racial disparities between White and people-of-color led households persist, and some groups face major barriers to owning a home.

Major homeownership disparities remain — or have worsened — between White and people-of-color led households over the past two decades. The homeownership rate for Black households is lower than it was in 1968, the year the Fair Housing Act went into effect.

Herbert pointed out that because housing is still the primary vehicle for wealth accumulation among low-income and people-of-color households, this is a major problem. “This is an amazing loss of progress on an important social indicator over two generations,” Herbert said. “As we approach becoming a majority minority country, we can’t lose sight of the importance of homeownership as a vehicle for residential stability, as well as financial stability.” 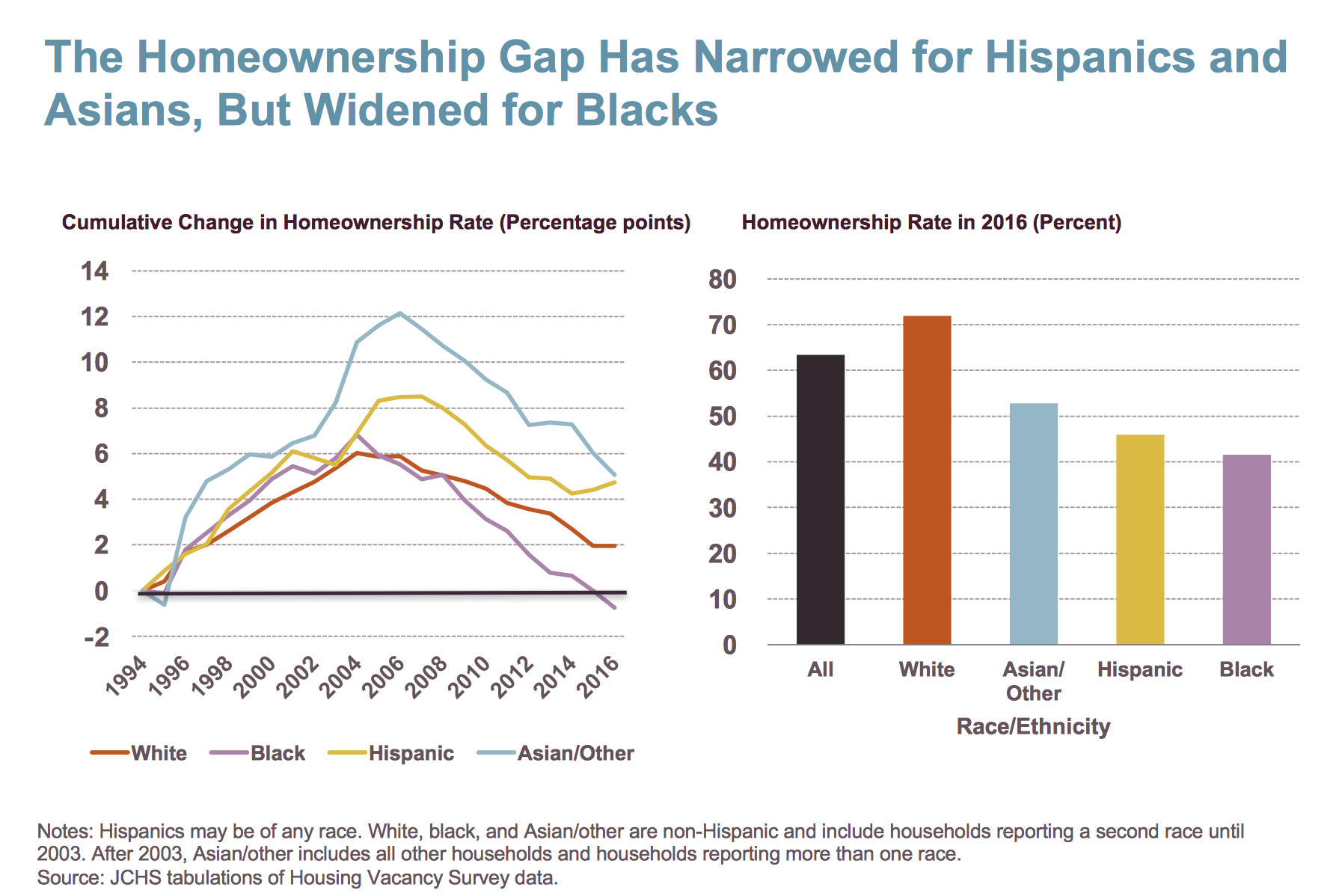 Other groups face significant barriers to homeownership, as well. Many recent college graduates must dedicate a significant portion of their income to paying off student debt, making it tough to pay a mortgage. And for people with lower credit scores, it’s become harder and harder to get access to credit since the recession. For first time homebuyers, less expensive homes under 1,800 square feet are increasingly difficult to find. 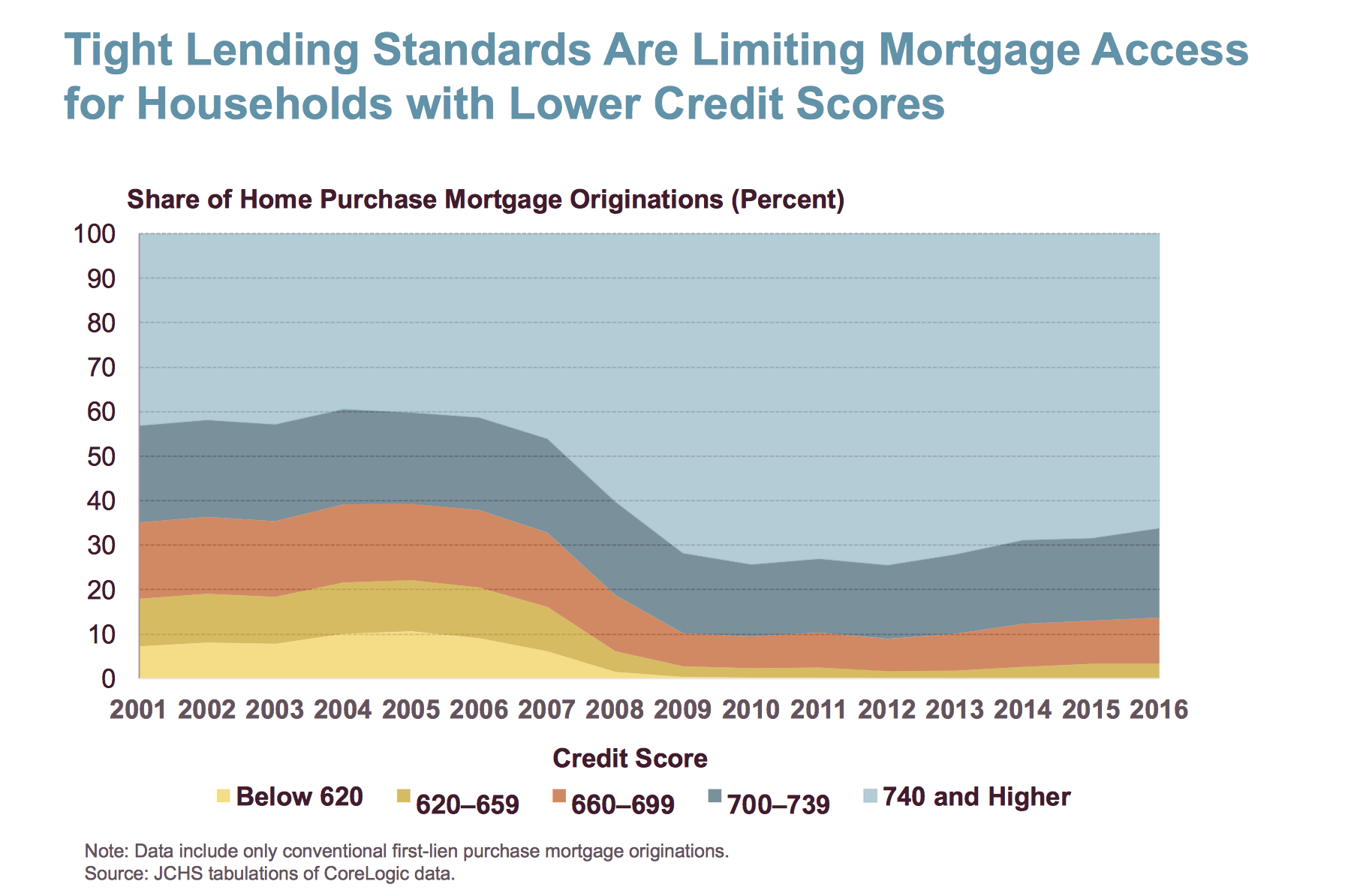 6) In the coming decades, household growth will be strong, and people of color and seniors will play a major role in shaping the housing market.

People of color will comprise the bulk of household growth from 2015 to 2035 — and one-third of households will be age 65 and over by 2035. In the face of these demographic changes, Herbert said the housing sector must consider whether the housing market works for people of color, and how we can provide housing with services for seniors. 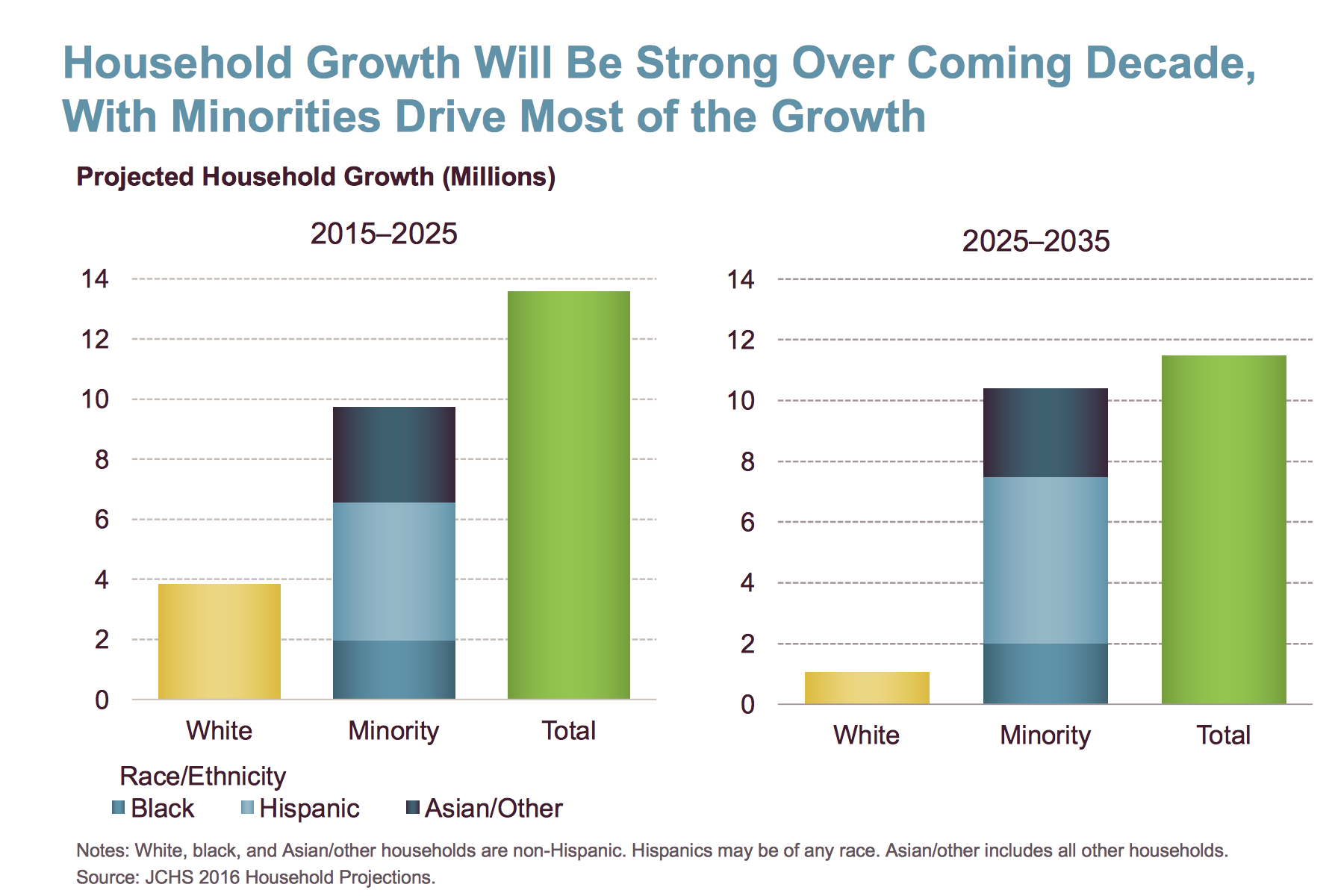 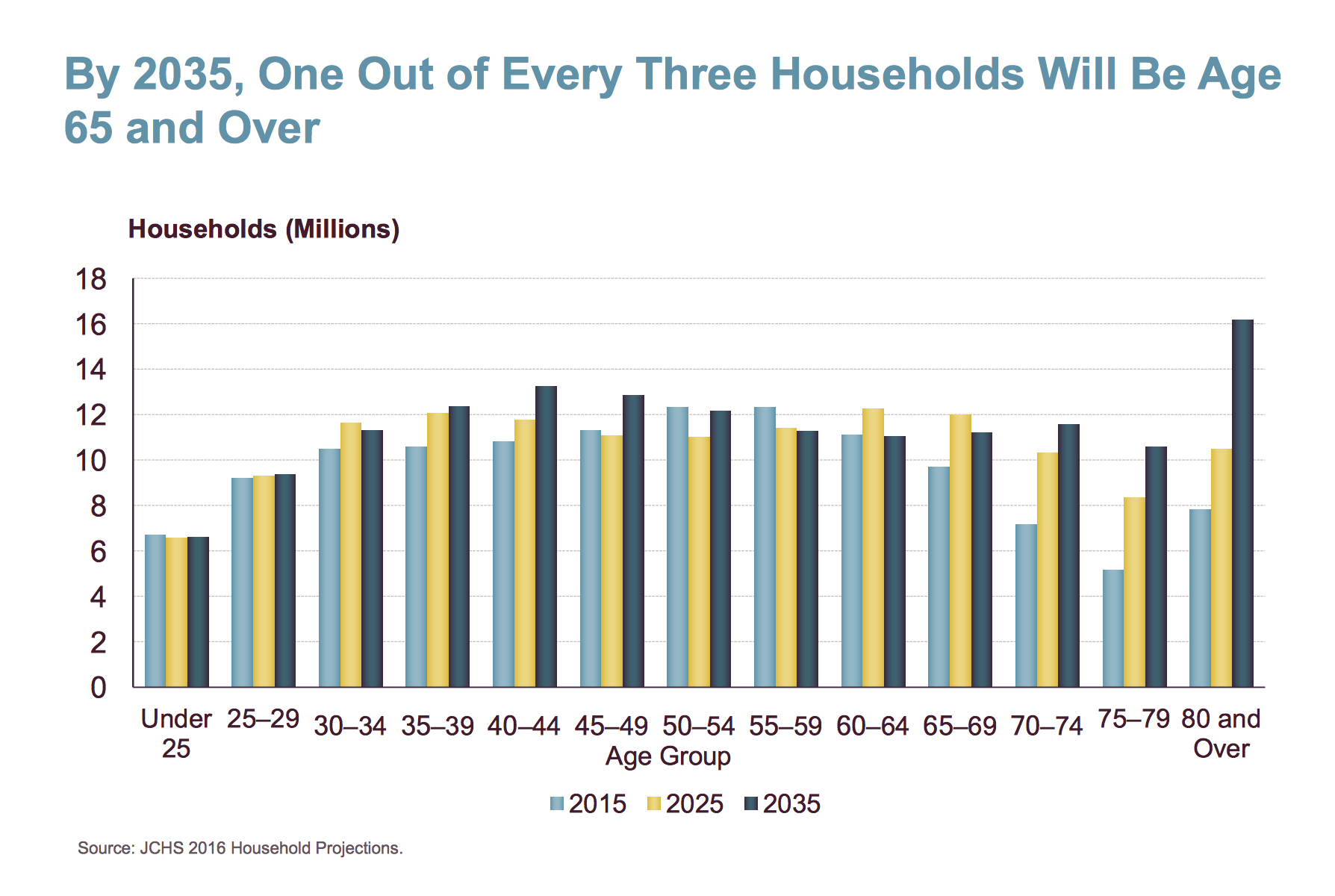 A panel discussion including Nick Place of Bridgewater Bank, Chris Zuspann of Frerich’s Construction, and Deidre Schmidt of CommonBond Communities followed Herbert’s presentation. Zuspann asserted that to respond successfully to the trends highlighted by Herbert, construction firms, developers, bankers, and other players in the affordable housing sector must take a collaborative approach. “We’re all yoked together in one way or another,” Zuspann said. 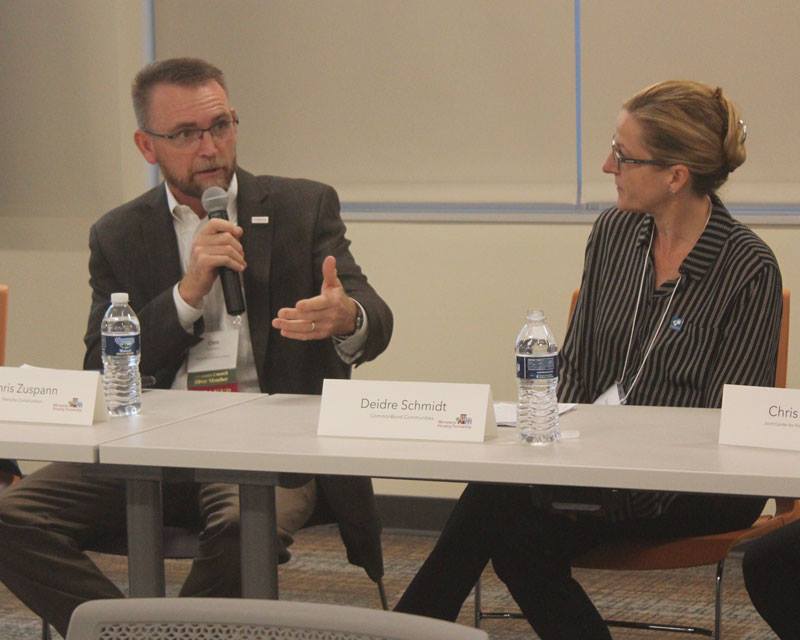 Herbert added that because housing market problems have developed over time as a result of complex factors, solutions must be numerous and varied.“This is a problem that has many roots and took many years to get to this point,” Herbert said. “There’s no silver bullet solution.”

Anne Mavity, Executive Director of Minnesota Housing Partnership, reminded attendees that the trends Herbert elucidated have an immediate, tangible impact on people and entire communities. She called upon Investors Council members and community leaders to translate information from researchers like Herbert into to effective action.

“The external world is looking to us in this room to help figure this out,” said Mavity. “There’s an urgency to this work — it’s not just academic.”

See slides from Herbert’s presentation here and photos from the event here.

Make sure you’re part of these engaging conversations. Join the Investors Council today!