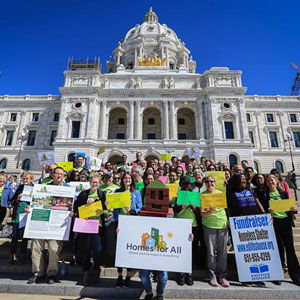 In collaboration with our partners at the National Low Income Housing Coalition, we crafted this recap and reflection on this year’s state legislative session. Learn more at NLIHC at http://nlihc.org/.

The expanded funding is largely the result of ongoing advocacy by the Homes for All coalition, a network of Minnesota groups working to end homelessness and the affordable housing shortage.

Despite a budget surplus of more than $1 billion, the Republican-controlled House and Senate proposed extensive budget cuts and tax reductions. This approach resulted in a special session because of the vast difference between the budget as passed and what Gov. Dayton was willing to sign. The contentious tone of the session makes the significant success of housing advocates more hard-earned and surprising than in previous years.

The 2018 state budget allocates $55 million for HIBs, bonds used for construction and preservation of affordable housing. They can be used to build and rehabilitate supportive housing for those at risk of homelessness and to preserve affordability of federally subsidized housing. HIBs can also be used to buy land for community land trusts and for foreclosure prevention. Minnesota’s budget included an additional $10 million for GO bonds, which are used to improve health, safety, and energy conditions in existing public housing. In 2016, $80 million in state bonds leveraged $300 million in private and local funding. Finally, the budget included $12 million for the Catholic Charities Dorothy Day Center located in St. Paul, which provides essential emergency assistance services such as shelter, job search guidance, meals, and access to basic medical care. 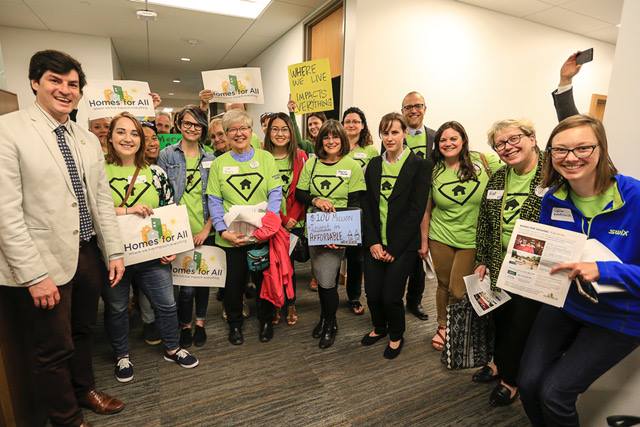 Homes for All advocates at a 2017 rally, including team MHP!

The final budget also includes important language enabling local communities to establish local housing trust funds, a priority for MHP. Unfortunately, the local housing trust fund language did not establish a dedicated funding mechanism and did not provide for a state funding match to incentivize the creation of trust funds. The enabling legislation does, however, provide MHP with momentum leading to introduction of legislation next year to secure funding sources.

While Gov. Dayton signed all nine budget bills, he removed $130 million in state funding by line-item vetoing the funding for the Minnesota House and Senate operations. He did this because he opposed many provisions in the tax bill, such as tobacco tax breaks, estate tax exclusion increases, property tax freezes, and other allocations. The legislature had added a provision to one of the budget bills which would have cut funding to the Department of Revenue if Gov. Dayton had vetoed the tax bill. Essentially, this left Gov. Dayton with no department to collect taxes if he did not go along with the legislature’s tax cut priorities, leaving him with little choice but to sign the tax bill. By vetoing the funding to operate the House and Senate, Gov. Dayton stated he is hoping to bring the Republicans back into negotiations. Republican lawmakers are now suing the governor with a court date likely in the upcoming week. It is not clear which side will prevail in court.

The $77 million in bonds falls short of the $100 million goal for the Homes for All coalition. Advocates are developing strategies to further expand housing investment in future budget sessions. “This was a difficult budget session, but we are proud to see a modest expansion of resources for affordable housing,” said Chip Halbach, Executive Director at Minnesota Housing Partnership. “This was only a partial victory, but we will be able to avoid a drop off in housing activity at a time when low-income people are being displaced through upscaling occurring in the private unsubsidized market.”

Read more about the Homes for All campaign at: http://www.homesforallmn.org/.