Desmond: “We can’t fix poverty in America without fixing housing” 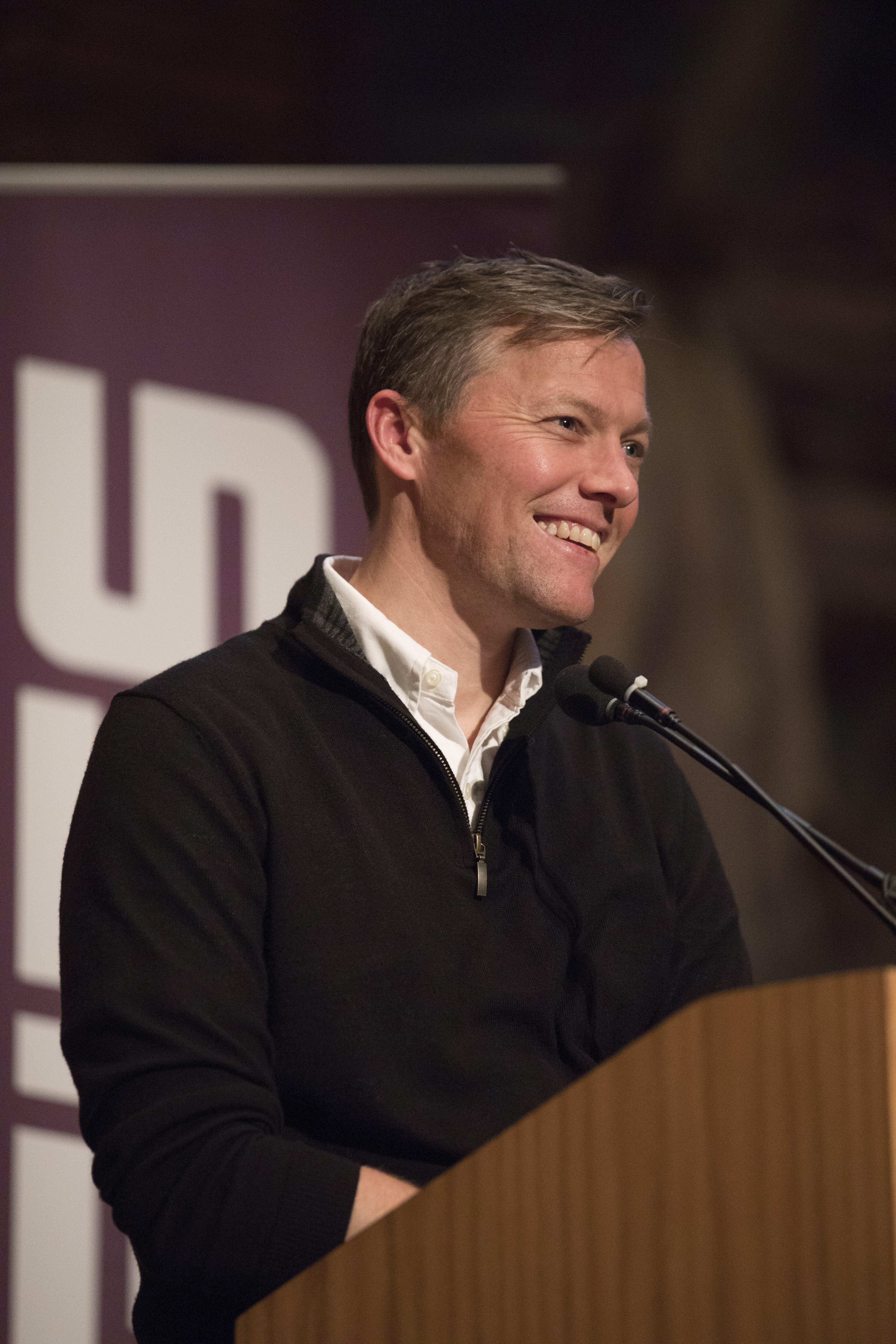 The stories were set in Milwaukee, nearly a decade ago, but for Barb Jeanetta the narrative was all too familiar — and all too current.

When the Executive Director of Alliance Housing read Matthew Desmond’s award-winning book, Evicted: Poverty and Profit in the American City, she saw the challenges local tenants face each and every day here in the Twin Cities.

“I immediately recognized the families Desmond profiles,” she said. “They could easily have been tenants of Alliance Housing.”

To inspire and energize local stakeholders, MHP and Alliance Housing hosted Matthew Desmond for a presentation and panel discussion in Minneapolis this weekend, highlighting the wide and lasting impacts caused by evictions, homelessness and housing instability in our community.

A MacArthur Genius, Princeton professor and nationally recognized researcher, Desmond spent more than a year living alongside and following the evictions of several low-income families in Milwaukee. While embedded in the complex and vibrant lives of those families, Desmond analyzed eviction court data and surveyed thousands of renters to craft a Pulitzer Prize-winning book that has galvanized attention around an often overlooked housing crisis.

His visit to Minneapolis came with a clear message: “We can’t fix poverty in America without fixing housing.”

“America’s strange,” Desmond said to the assembled crowd of more than 600 attendees on Saturday night. “It’s the richest democracy with the worst poverty… That’s always bugged me, and I wanted to understand the role housing plays in that story.”

He came to understand that story through the lives of people like Arlene, a mother of two who paid more than 80 percent of her monthly income on barely habitable housing and whose family got pushed into more tenuous and dangerous living situations with each subsequent eviction. But Arlene, Desmond emphasized, is not a hard-luck case; she’s like the majority of low-income renters in America.

In the Twin Cities, more than 80,000 families pay more than 50 percent of their income on rent and nearly half pay more than 30 percent. So it’s not surprising that research from the City of Minneapolis Innovation Team found that, of the 3,000 evictions filed each year, more than 90 percent are for non-payment of rent. And, as Desmond eloquently laid out through the lives of families he came to know so well, those evictions cause deep and long-lasting wounds.

“Eviction causes loss,” Desmond explained. “Families lose their home, their community, their stuff. Kids lose their schools. Evictions come with this mark or blemish, which can prevent you from moving into good housing in a safe neighborhood — and can also keep you out of public housing… We have a study that shows eviction causes job loss, because eviction is such a consuming, stressful, drawn-out event that can cause you to lose work, lose your footing in the labor market. And eviction affects your soul, your mental health. When you add all that up, evictions, which used to be rare in this country, are not just a condition of poverty, they’re a cause of it, too.”

And that repeated loss and trauma disproportionately impacts communities of color. In 2016, the City of Minneapolis found that nearly half of all renters in North Minneapolis had experienced eviction in the past three years. A survey this summer conducted by HOME Line and the University of Minnesota’s Center for Urban and Regional Affairs showed that Black women were the largest demographic group of the more than 115 cases observed in Hennepin County Housing Court and African Americans, male and female, made up more than 55 percent of tenants facing eviction. 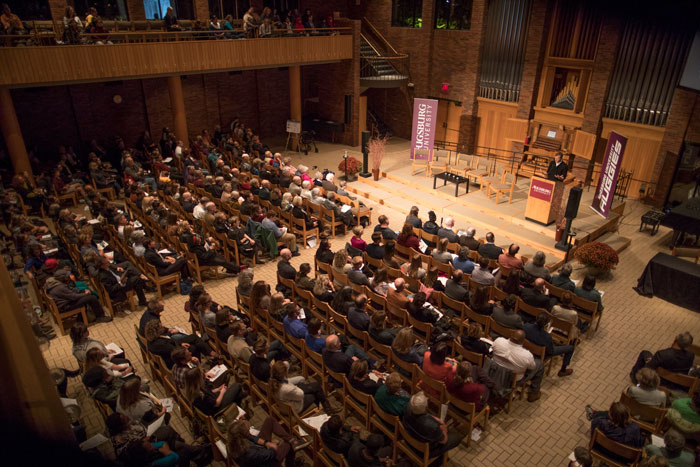 According to Desmond, that matches a national — and deeply troubling — trend.

“In Milwaukee, 1 in 5 black women report being evicted in their lifetime compared to 1 in 15 white women,” he said. “That should trouble us because it means that eviction is the feminine equivalent of incarceration. We know that many of our poor African American men are being swept up by the long arm of the criminal justice system and are being locked up. Many of our poor African American women are being locked out and are disproportionately bearing the brunt of the eviction crisis.”

“So the face of the eviction epidemic is moms and kids,” he continued. “Studies have found that half of families face discrimination in their housing searches… And kids are a big part of the equation. They can prolong the time you’re homeless after an eviction, and they can be the cause of your eviction… When we analyzed court data we found that the difference [between being evicted or not] wasn’t gender or race or even how much owed your landlord, it was kids. Your chance of eviction tripled when you had kids.”

That recurring and unrelenting stress of simply maintaining shelter takes a toll, Desmond emphasized, undermining the ability for both children and adults to achieve even their most basic goals.

“Just think about the brainpower and creativity and potential that we squander because we ask someone like Arlene to spend so much of hers figuring out where she’s going to live after she’s inevitably, predictably evicted,” he said. “Poverty reduces people born for better things. A stable, affordable home gives people a shot at realizing their full potential.”

And yet, even as the data and daily lives of our neighbors confirm that truth, our housing policies and resources do little to address that crippling reality. Desmond pointed out that only a tiny fraction of those in need of housing support get any assistance from the government through Section 8 or public housing.

“It’s like turning away 3 out of 4 families that need food stamps,” he suggested. “It’s like saying, ‘I’m sorry, you’re going to have to go hungry.’ That’s exactly how we treat low-income families looking for shelter.”

For Desmond, that active oversight is an affront to our American values. 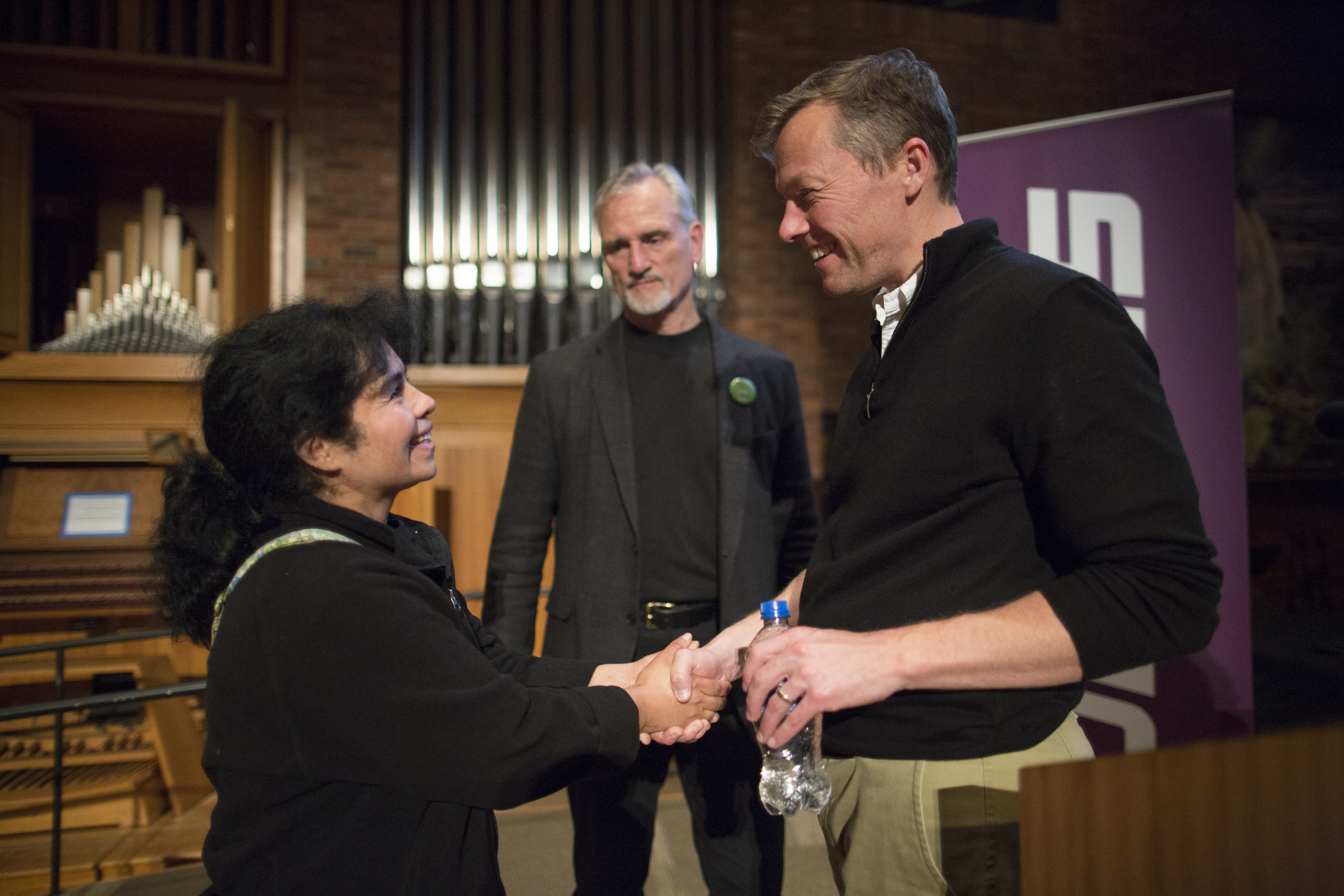 “We’ve affirmed provision in old age, access to 12 years of education, basic nutrition to be rights in this country, because we believe those things are fundamental to human flourishing and economic vitality,” he said. “There’s not an argument that has any legs that says housing isn’t fundamental to human flourishing. I think housing should be a right in this country and the reason is really simple: Without stable shelter, everything else falls apart.”

So what do we do? Desmond emphasized that there’s no silver bullet and community expertise and lived experience need to drive local change. But at the federal level, he advocated for universal housing vouchers for low-income families — an expansion of the Section 8 program that would ensure everyone below the poverty line would only have to pay 30 percent of their income on rent.

“That would fundamentally change the face of poverty in America,” he suggested. “It would drive down family homelessness and make evictions rare again. Families would get that sigh of relief. They’d be able to buy their kids enough food and understand what a home really is, to root in a community.”

Certainly, that type of program would be costly — by Desmond’s estimate, as much as $22 billion per year. But, he argued, we have the money, we’re just spending it on the rich through subsidies like the Mortgage Interest Deduction rather than on the poor.

“The kind of program I’m advocating for would cost us $22 billion a year, though that doesn’t account for the savings we’d get from driving down homelessness and residential insecurity in our cities,” he explained. “It’s not a small figure, but it’s well within our capacity. We have the money, we just make decisions about how to spend it.” 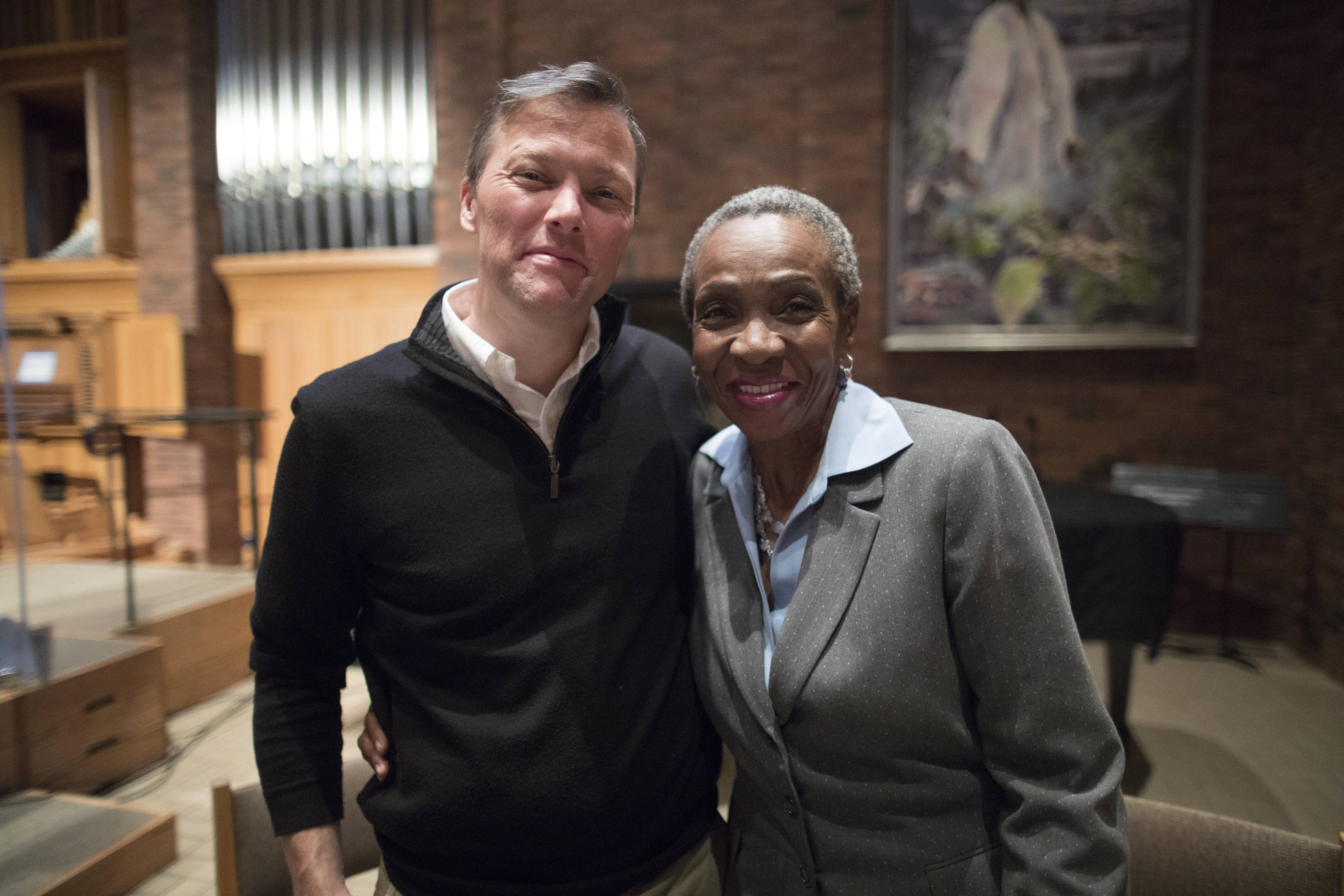 For instance: “The year Arlene was evicted [2008], we spent $41 billion on direct housing assistance to poor families, through public housing and Section 8. That same year we spent $171 billion on homeowner tax subsidies, a number that was equivalent to entire budgets of the departments of Education, Homeland Security, Veteran Affairs, Justice and Agriculture combined. That’s a rather large number — and most of that benefit goes to families with six-figure incomes [through the mortgage interest deduction]. Most white families own their home and are eligible for one of the most generous deductions in the tax code. Most Black and Latino families do not because of our legacy of racial discrimination and are left out of this bargain. It’s hard to imagine a social policy that more unblushingly magnifies our racial and economic inequality than our current housing policy does… If we’re going to spend the bulk of our public dollars on the rich, let’s just be honest about that rather than repeating this lie that the richest country on the planet can’t afford to do more.”

“If poverty persists here, it’s not for lack of resources. We lack something else.”

So Desmond called on all of us to take action in our institutions and communities to create the public and political will to make the right to housing an American value.

Stay tuned for a recap of the panel discussion tomorrow!