Creating a Full Spectrum of Senior Housing in Mora 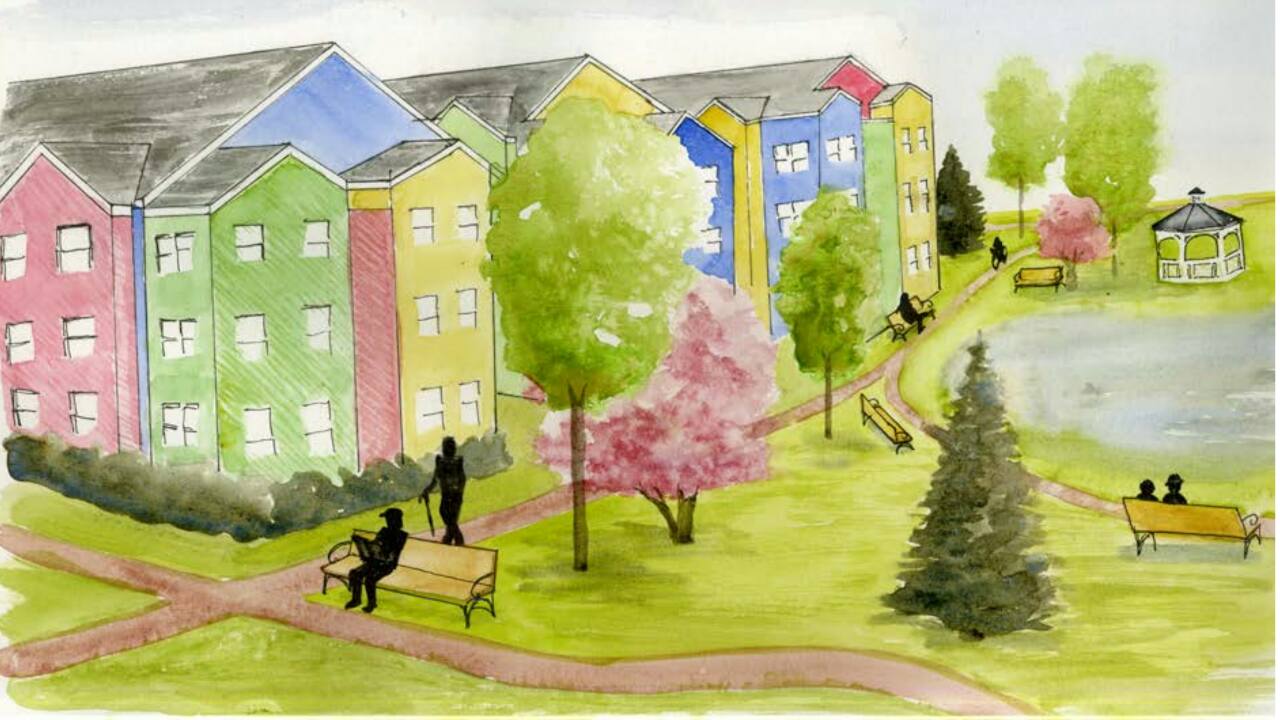 Like so many communities, Mora has a long waiting list to secure one of the city’s affordable rental units. But, in the East Central Minnesota town, a particularly vulnerable population makes up the majority of the list. Of the 208 families, 161 are older adults over 55.

“The waiting lists are so heavy with seniors that many of them aren’t living long enough to get to the top of the list,” says Rose Dunn.

As the Executive Director of the Mora Housing and Redevelopment Authority (HRA), Dunn has been elevating and addressing the need for more affordable senior housing for close to a decade. And last month Dunn, the HRA and the dozens of people on the waiting list got a significant victory: Funding for a project that will add 24 units to a burgeoning senior living campus in Mora (pictured right).

It all started more than 10 years ago, when the Mora HRA purchased a 16-acre parcel on the east side of town. With a rising number of retirees in the farm community, there was a dramatic need for more affordable housing for Mora’s elder residents.

So in 2007, the HRA built 24 units of senior independent living and in 2010 added assisted living, memory care and a senior center to the Eastwood campus. With community support and project successes the HRA was moving forward with more affordable apartment units when the great recession hit. The economic downturn put their plans on hold, but the dedication to the project remained strong.

And for good reason. A housing study for the City of Mora released in May 2014 noted that “demand was highest for affordable senior housing, showing a need for nearly 70 units” through 2025. A few months later in October 2014, a housing assessment for the wider East Central Regional Collaborative reported the area’s senior vacancy rate was barely 1 percent — and the region would need 2,761 more senior units through 2025. 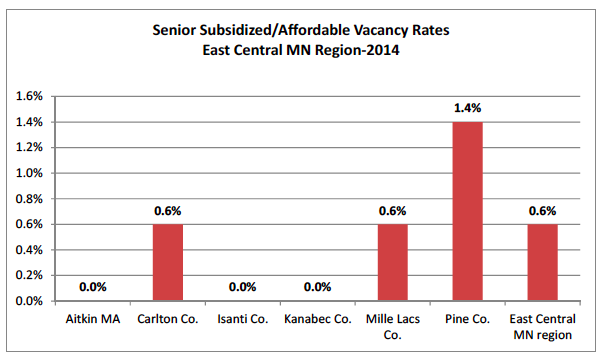 Having worked with MHP on the housing studies, Dunn joined the Housing Institute in 2015 — and it was just what the HRA needed to jumpstart a project that would start chipping away at that growing need.

“The board remained committed to bringing in more affordable senior housing; they’ve never taken it off their agenda,” Dunn says. “The Housing Institute was really a great catalyst, not just in what I learned there and the resources I could bring back to the HRA, but also the way it helped to create a stronger community group focused on affordable housing in our area. Through that group the HRA has been able to engage the community and work on this as a project with others.”

And that group has grown. While the Housing Institute Team started with representatives from Lakes & Pines CAC, Seven County Senior Federation, A Place For You (homeless shelter), East Central Regional Development Commission, and Central MN Housing Partnership and Mille Lacs Corporate Ventures, it didn’t stop there. “Our team’s commitment to meeting outside of the Housing Institute evolved into a group we call the ‘East Central Housing Organization’ (ECHO) and it now includes more than 20 members, including the Central Minnesota Council on Aging, Kanabec and Pine counties, Pine City Community College and others,” Dunn says. “This group meets monthly and has been very proactive in reaching out to the greater east central region to begin the work of developing regional housing goals.”

Fostering that collaboration wasn’t the only goal for Cherre Palenius, the MHP Community Development Manager that worked closely with the team in Mora to turn their vision into a viable project. “We wanted them to look at the entire site and create something that was connected and complementary to the existing development, that the community and existing residents could support,” Palenius says. “We encouraged them to think about building a senior campus, versus one parcel at a time, and deliberately thinking about and planning how everything would connect.”

Through the Institute, the Mora HRA decided the next piece of the puzzle was a 24-unit senior apartments project that would become Mysa House. On the advice of Palenius, the team applied to and were selected for the American Institute of Architects’ Search for Shelter program this spring. “That allowed us to work with a group of architects and students on some visionary plans and ideas,” Dunn says. “When we conveyed to them the Swedish theme of our town and campus, they found the word mysa. It’s not immediately translatable but it’s a feeling in Sweden of coming home and being comfortable and cozy after a long day. That’s kind of how we feel about this campus; we want seniors who have lived long, hard lives and put so much work into our community to come home to Eastwood and feel comfortable, cozy and relaxed.” 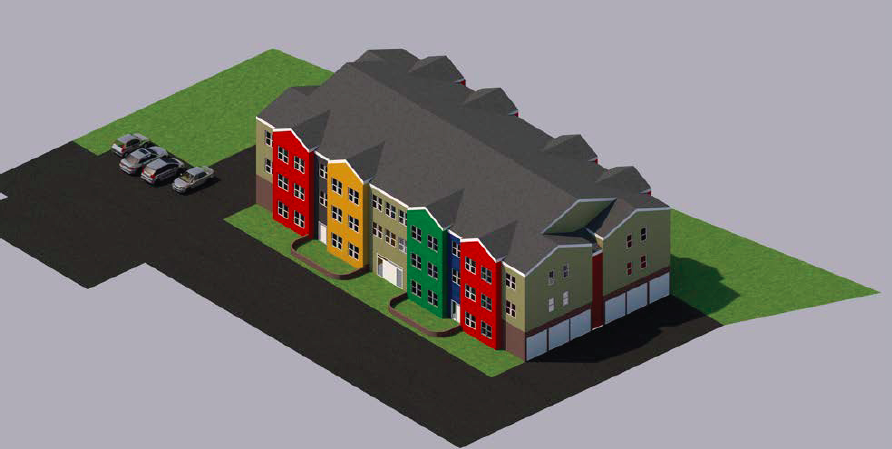 From the AIA Search for Shelter renderings

To make that happen they needed a developer — and dollars. Through the Housing Institute and assistance from Palenius, the Mora HRA contracted with D.W. Jones for the development and put in an application for funding — its first ever — to the Minnesota Housing Finance Agency. In October, they got good news: MHFA had selected the project as part of its Senior Housing Pilot, allocating $2.1 million in funding from the agency and an estimated $1.1 million in 4% tax credit equity.

For Dunn, moving forward on Mysa House is another important step in creating a continuum of housing options for aging residents. “We have the independent and assisted living and memory care,” Dunn explains. “Mysa House will bring in services, so if residents come in being more independent they can get services they need later — in the home where they’re already living.” Beyond Mysa House, the HRA has a vision for more affordable apartments and even senior townhomes.

While the project has been embraced in Mora, Dunn discovered the power of truly engaging with community partners. “When we did the independent and assisted living projects, the HRA did it very independently and it went well,” Dunn recalls. “But the more we go down this road, the more we realize there are many other parts of seniors lives aside from just housing. So it’s been important for the success of the project to partner with other community agencies that support seniors and can bring in those services.”

With construction set for spring and an opening envisioned for 2018, Dunn is already getting inquiries from seniors interested in Mysa House. “The senior center here has really vibrant programming and a lot of our regular seniors coming in who live in their homes in the community have become aware and have been watching as we’ve worked toward this project. Last week when it was announced that we were getting the funding, three came and asked me if the waiting list is open.”