Homeowners, especially a small minority of the wealthiest homeowners, benefit significantly from several government subsidies, especially the mortgage interest deduction (MID). The MID alone is a larger tax expenditure than all expenditures for rental housing. Congressman Ellison proposes a sensible modification to a tax policy that is already under bi-partisan consideration. The Congressman’s proposal to convert the MID to a tax credit would generate $200 billion in revenue for rental housing that would be affordable to low-income families. It would also retain tax benefits for the majority of homeowners. The Congressman’s reform better promotes homeownership for low- and moderate-income households and creates a steady stream of funding for much-needed adorable housing – all without increasing taxes or appropriating money from other important programs.

MHP lauds Rep. Ellison for his pathbreaking housing policy work, and supports his proposal as part of the national United for Homes Campaign. 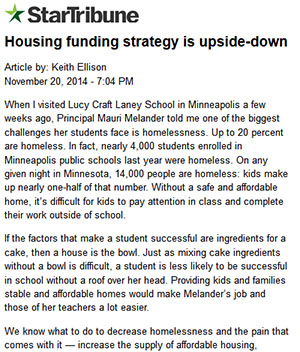