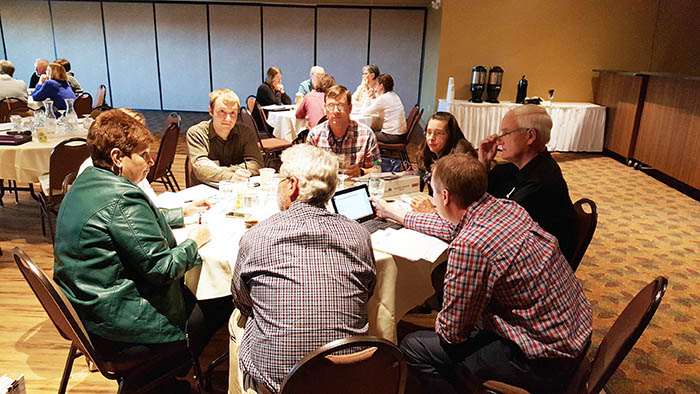 There’s wisdom in the old adage “many hands makes light work.” Still,  when it comes to tackling a community development project, getting the right people together at the right time is often easier said than done. That’s where the Housing Institute for Greater Minnesota comes in.
Since 2010, the Housing Institute (delivered by MHP in partnership with the Greater Minnesota Housing Fund) has provided a forum for teams of community developers and local stakeholders to effectively and collaboratively tackle some of their communities’ most pressing challenges. Outcomes emerging from the latest round of the Institute illustrate the powerful effect of working across sectors. Whether it is building support for downtown revitalization, recruiting developers to take on affordable housing projects, or developing regional housing information resources, the Institute provides a platform for teamwork that turns aspirations into action.
“The Institute helped us build ownership of our initiatives within the communities we serve. The program helped us realize how much more we can accomplish when we work together.” –Rose Dunn, Executive Director of Mora Housing and Redevelopment Authority
Round 4 of the Housing Institute was comprised of four teams from regions throughout north central Minnesota. Over 18 months, the teams took part in four, two-day long seminars with presentations and break-out sessions tailored to meet the needs of the projects identified by each team. Between each seminar, each of the teams worked with a facilitator from MHP to make progress on their own region’s plans.

A team from Central Minnesota used the Institute to support renewed rehabilitation efforts in downtown Brainerd. In partnership with an established nonprofit called Brainerd Restoration, efforts were made to secure funding for a full-time employee to lead special projects. Team members also worked toward acquisition of a vacant store front to be redeveloped into a mixed use facility.

One of the defining characteristics of the Institute is bringing together unlikely partners from the private, nonprofit, and public sectors to accomplish community projects. Team member Jennifer Bergman and Executive Director of the Brainerd Housing and Redevelopment Authority sees the cross-sector approach as an ongoing strategy, one that will bolster community development projects in the area for years to come.

“The Housing Institute gave us the opportunity to bring a group of people together to discuss Downtown Brainerd. I feel our work going forward will be stronger because of the new relationships we’ve created.” –Jennifer Bergman, Executive Director of Brainerd Housing and Redevelopment Authority

Planning through a regional lens

For the team from West Central MN, the Housing Institute provided an opportunity for local stakeholders to engage through a wider, more regional lens. One of the first projects was to conduct a county housing plan. The last county-wide study of Ottertail County was completed nearly 19 years ago.

Members from the team worked with a consultant and area communities, some of whom had already recently completed housing studies, to compile data for the county-wide study. The study will be completed in late February and the team is organizing a regional housing dialogue for early spring to present the data and receive feedback from regional leaders.

“We have an available workforce of about 6,800 in Fergus Falls, but are home to over 11,000 jobs. Such a wide labor draw really demands that we see ourselves regionally and plan regionally. Our economic health depends on it. The Institute allowed our team to engage our communities in new ways and work more closely to ensure the vitality of our region.” –Gordon Hydukovich, Community Development Director for the City of Fergus Falls

One of the key outcomes for the team from East Central, MN was the creation of an inter-organization partnership called East Central Housing Organization (ECHO). The team established ECHO to ensure ongoing collaboration in community-wide housing and community development projects and to fill in the gaps of services available to residents. ECHO meets once a month to discuss project progress and the group continues to attract new partners.

The team is working on a region-wide resource website for residents to access up-to-date housing information. The team also worked on an addition to an existing senior housing and community center project called Eastwood Development. The next phase of Eastwood will include 30-40 mixed market and affordable units. The Mora Housing and Redevelopment Authority is currently in the process of selecting a developer for the project.

“We are so much more capable of doing the project in a more sophisticated way after taking part in the Institute. Before the Housing Institute, we really relied on the developer to shape the project and push it forward. We didn’t realize how much power we had to advocate for the kind of project we wanted and develop the skills to make it happen. Our board has taken more ownership of the project this time around as well.” –Rose Dunn

Affordable housing is just one of the many housing needs in Cloquet according to Debra Shaff, Executive Director of Cloquet/Carlton Housing and Redevelopment Authority. The availability of low-income housing, housing for seniors, and supportive housing is extremely limited and some forms of assistance, like emergency housing and shelters, do not exist at all in Carlton County.

The Housing Institute helped the team prioritize development projects and connected the housing authority with private and public sector development expertise and financing knowledge to move on a project. The team is in the process of selecting a developer for a 36-unit affordable multi-family project.

“The Cloquet Housing Authority had no previous housing development experience and at one point questioned whether or not they had the capacity to tackle this type of initiative. The Housing Institute finally got us talking about housing in an intentional way and facilitated a place from which to take action.” -Debra Shaff, Executive Director of Cloquet/Carlton HRA

In order to communicate the high need for new development and build community support, the team has engaged in several conversations with local congregations, led by a team member who serves in the local ministerial society. The team plans to build on their community engagement efforts by holding a housing summit in February to talk about how to grow long-term financial investment in housing, which Shaff hopes will keep the momentum of the team going.