For the first time in nearly 30 years, housing advocates have the opportunity to help shape the regional housing policy in the Twin Cities. The Metropolitan Council's 100+ page Housing Policy Plan, the first such document since 1985, has the potential to impact housing in the Twin Cities metropolitan area in several key ways. With the Council's unique ability to convene public and private stakeholders around issues impacting the Twin Cities, the plan's impact is far-reaching.

In particular, the plan includes numerous initiatives for expanding housing choice in the metro area. For this, it deserves scrutiny and support, although MHP recommends several amendments. Read more about what's in the plan, and how you can weigh in. 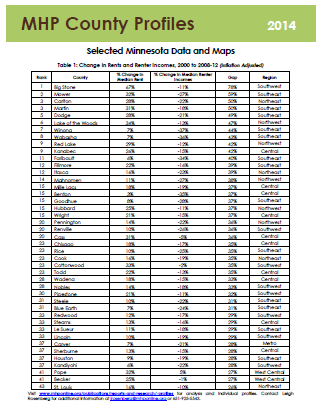 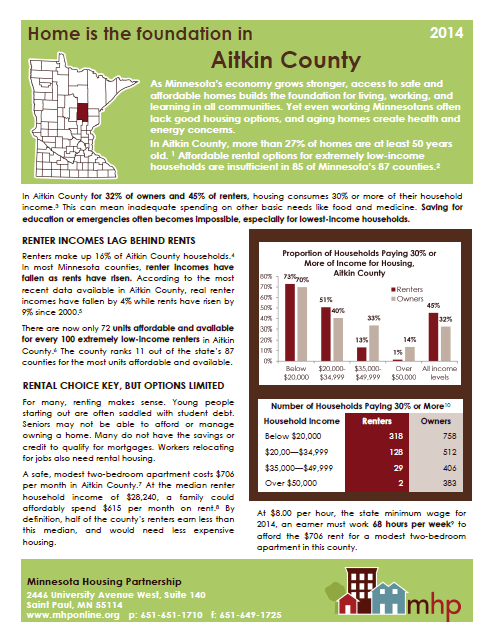 MHP's 2014 County Profiles, released this week, reveal that affording rent is now more difficult for renters than it was in the year 2000 in all but three of Minnesota's 87 counties. Rising rents and falling incomes for renters are to blame.

Since 2000, Minnesota's median rents have risen by 6%, while incomes for renters have fallen by 17%. This pattern plays out in most of the state's counties, with median rents rising in all but six counties, and renter incomes falling in most. The gap between rents and incomes has worsened in all but three Western Minnesota counties (Wilkin, Marshall, and Stevens) since 2000.

In addition to information about changes in rents and renter incomes, the 2014 profiles are packed with other information, including data about homelessness, the housing stock, costs to rent and own, and workers' wages. Profiles for Minnesota's 87 counties and the state as a whole, as well as charts, maps, and analysis, are available here.

Xiong served as co-chair of the policy committee of the Homes for All alliance, which led the successful effort to secure $100 million in bonds for housing at the Minnesota Legislature in 2014.

As part of the awards event, she was recognized for her service in the category of Public Policy Achievement (Housing).