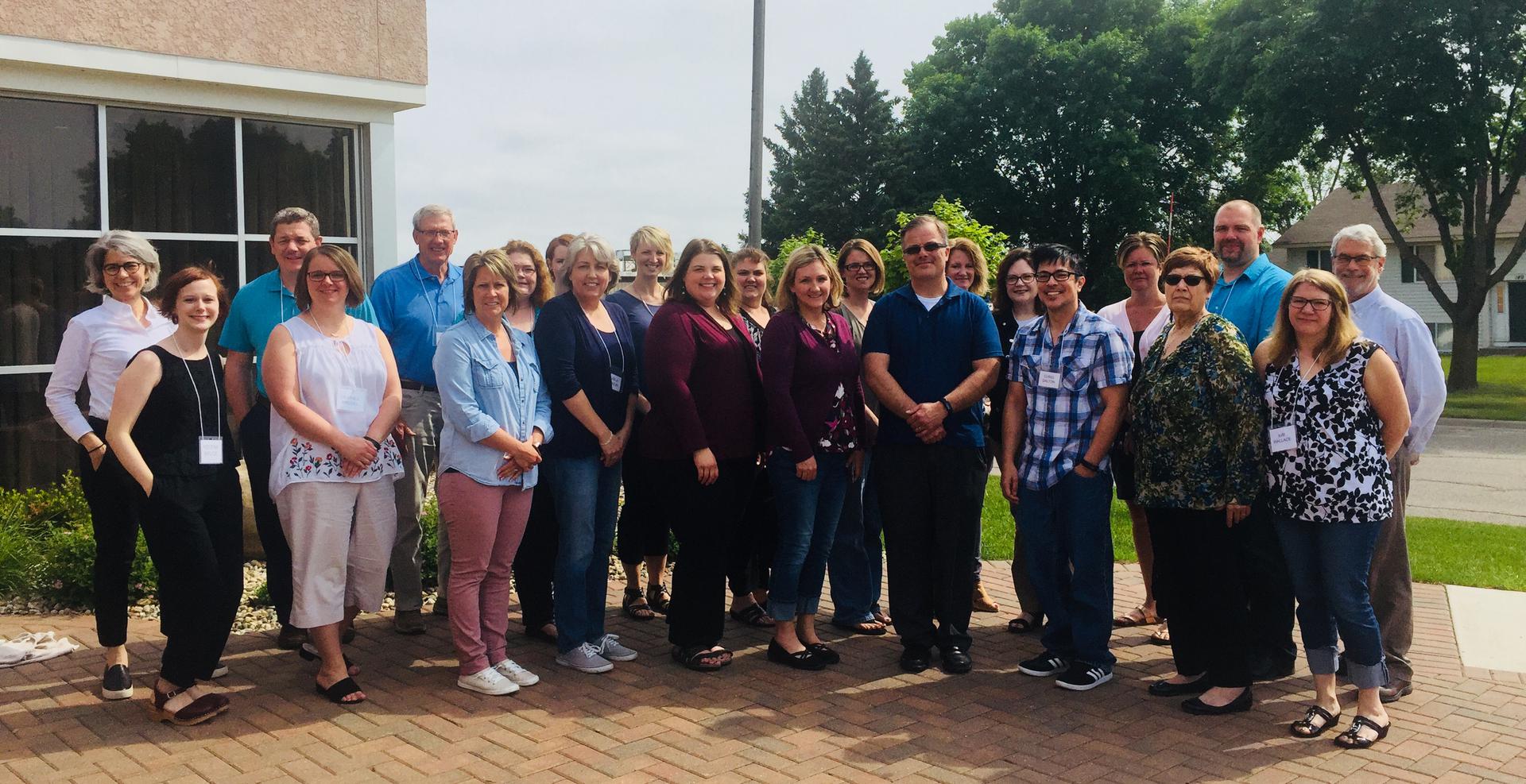 The grant, just shy of $500,000 will help Swift County expand its housing rehabilitation project. The fiunds will help low-income homeowners with much needed repairs and support county efforts to purchase and rehab a home in the county.

Many rural HRAs and EDAs in Minnesota face dwindling federal financial resources and have staff resources that are stretched to capacity. This makes competing for scarce resources in complex development environments extremely challenging resulting in lack of ability to maintain aging housing stock or create new affordable housing opportunities to meet local needs.

“We learned about the FHLB program during our participation in the Minnesota Housing Partnership’s Housing Institute in 2017-2018, and we were lucky to find we had a FHLB member bank in Swift County,” said Jennifer Frost, Executive Director, Swift County RDA.

“It’s been difficult to attract new housing development given the costs to build against our market rents and sales prices so we have really gone after rehab dollars to improve the homes we have. Increasing the quality of our housing stock provides more options for families looking to live in Swift County. More options can help businesses attract employees they need to our communities.”

Advocates from across Minnesota are descending on the Minnesota state legislature to make the case for robust investments and smart policies that advance housing, and Minnesota Housing Partnership has just released a key tool for talking about about housing with lawmakers.

Minnesota Housing Partnership has released its biennial Legislative District Housing Profiles, an essential resource, providing data on housing measures for all 134 legislative districts across the state.

While each district is unique in its challenges and opportunities, some troubling trends hold true. Utilizing data from the 2018 American Community Survey, MHP has found that there is a continued rise in housing costs, increasing numbers of families paying more than they can afford on housing costs and, in some districts, declining income for renters and homeowners.

“For a decade, MHP’s Legislative District Profiles have been an important tool for housing advocates and members of the media,” said Andy Birkey, MHP’s Director of Communications and Research. “Most importantly, the data provided by the Profiles provides data and trends lawmakers can use to better understand the housing challenges their constituents face.”

Most cost-burdened renters: 60% in District 59A - Twin Cities

Most cost-burdened senior renters: 80% in District 39B - Twin Cities

Most cost-burdened owners: 33% in District 62A - Twin Cities

Most cost-burdened senior owners: 38% in District 59B - Twin Cities

Lowest income needed to own a median-value home is $31,650 in District 22B - Southwest

Highest income needed to own a median-value home is $145,950 in District 49A - Twin Cities

Lowest income needed to afford median rent is $39,960 in District 40B - Twin Cities

Largest Increase in Rent: 27% in District 35B - Twin Cities

Largest decline in renter income: -13% in District 1B -Northwest

Largest increase in renter income: 65% in District 35B - Twin Cities

Largest increase in median home value: 16% in District 1B - Northwest

Largest decrease in median home value: -9% in District 14B - Central

Largest decline in owner income: -5% in District 62A - Twin Cities

Largest increase in owner income: 23% in District 60A - Twin Cities 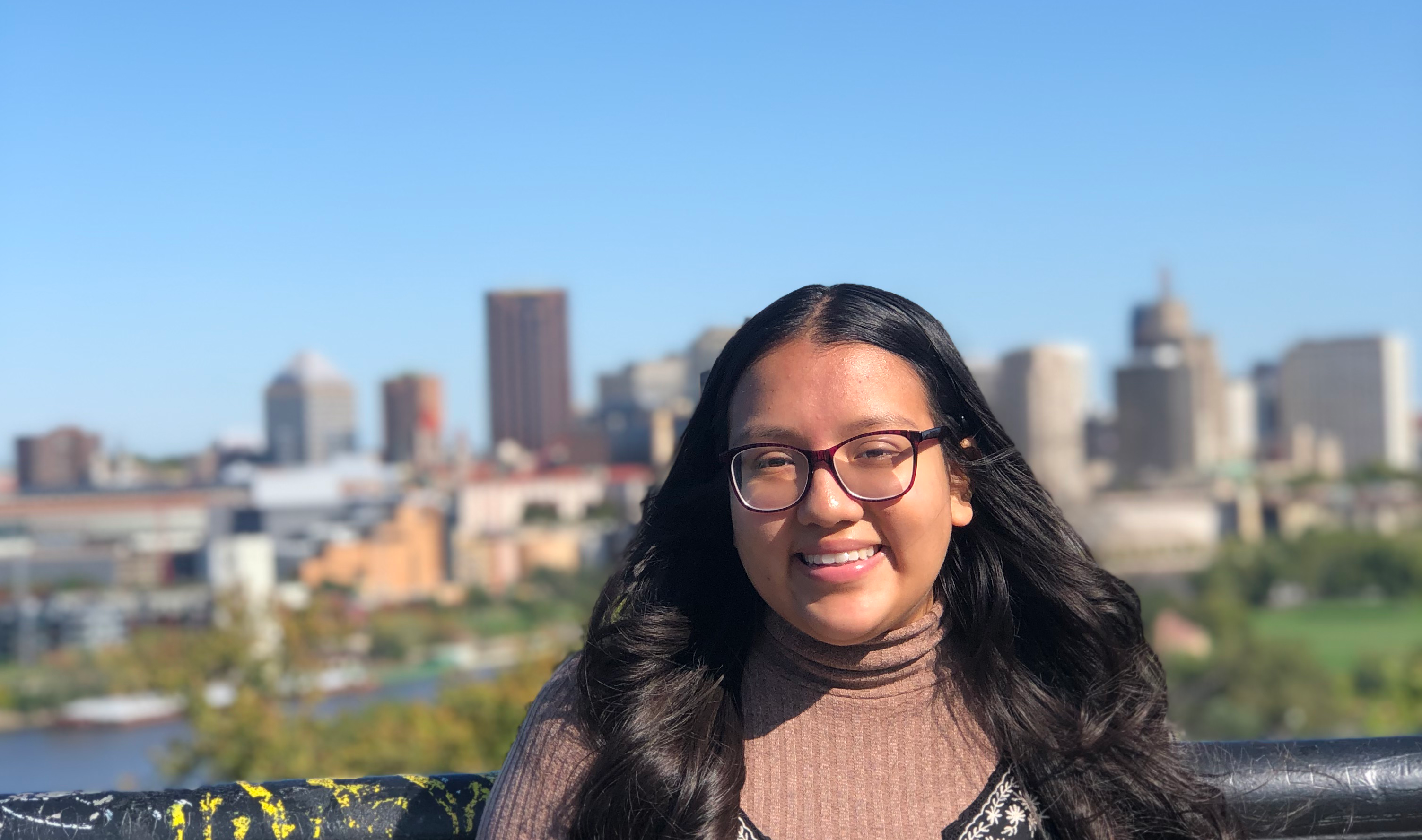 MHP is excited to welcome Stephanie Oliva as the organization’s 2020 Capitol Pathways intern.

Stephanie is currently a sophomore at the University of Northwestern where she is majoring in Intercultural Studies, Youth and Adult Studies and a concentration in Social Justice and Non-Profit. In addition, she was awarded the Act Six scholarship which is awarded to 45 of the Twin Cities’ most promising urban leaders each year.

The Capitol Pathways internship is a program of the Citizens League, and places college students of color in paid internships with government offices, nonprofits, corporations, and law firms where they can gain experience and build relationships in and around Minnesota’s Capitol.

Stephanie is looking forward to a hands on experience at MHP. “I want to see how MHP is helping those in our community, and to be able to learn from MHP’s Deputy Policy Director Libby Murphy and Policy Director Elizabeth Glidden,” she says. “As well as to gain knowledge on affordable housing and community development and take that back into my own community and help those who do not know how to navigate affordable housing.”

Stephanie will join MHP in early February and work closely with the team on-site at the Minnesota Capitol.

Stephanie’s inspiration comes from her parents. “They have taught me patience, love, perseverance, determination, and to advocate for myself,” she says. “From coming to the U.S. as immigrants and now being U.S. citizens, I have truly seen them push each other for themselves but also for their family.” 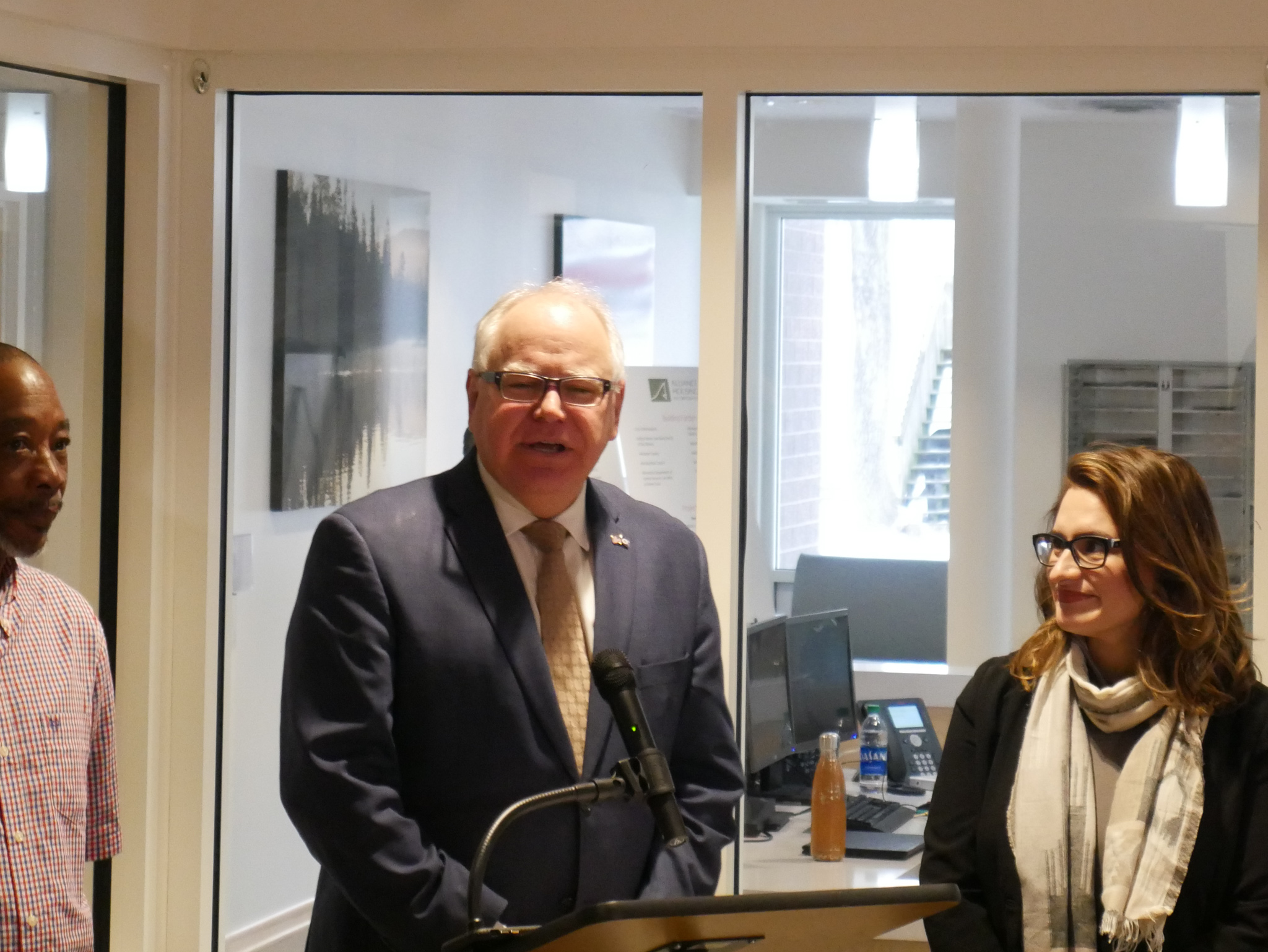 “Our state faces a significant shortfall of homes for those with the greatest need. This includes low-income renters who are caring for our elders, who prepare our food, and who teach our children," said Anne Mavity, Minnesota Housing Partnership's executive director. "This bonding request would get our state closer to a safe, affordable home for every Minnesotan."

Walz made the announcement at Minnehaha Commons in South Minneapolis.

“We’re working to make sure all Minnesotans can afford to live in the communities they call home,” Walz said. “Whether it’s proximity to work, school, or loved ones, too often Minnesotans can’t find affordable housing near the things that matter most.”

“Every Minnesotan deserves a safe and affordable place to call home.”

Recent events have highlighted the need for safe, affordable homes. Five people lost their lives and hundreds have been displaced from the tragic fires at the Drake Hotel on Christmas and the Minneapolis Public Housing Authority’s Cedar High apartments.

“These devastating events are stark reminders that, as a state, we have a lot of work to do to ensure that every Minnesotan benefits from the stability and safety of an affordable and healthy home,” Elizabeth Glidden, MHP’s Director of Policy and Strategic Initiatives. “The people displaced should be the foremost concern of every lawmaker as they consider this bonding proposal.” 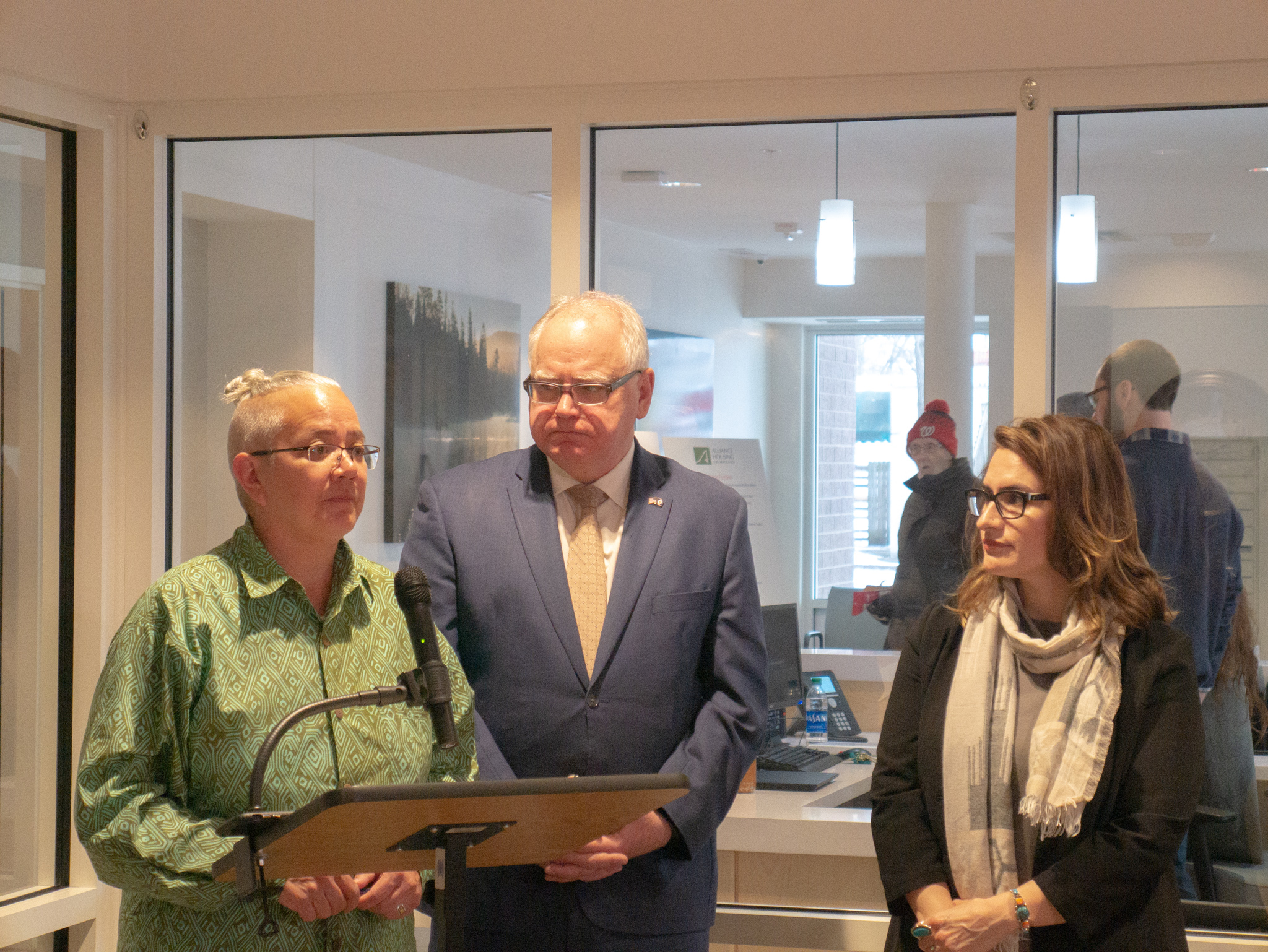 The need for affordable housing investment is evident across the state. According to MHP’s State of the State’s Housing, in the Northwest region, the percentage of cost-burdened renters grew from 33 percent in 2000 to 41 percent in 2017. Yet, in 2017, only 238 new multi-family units were permitted for construction. Seven of the 12 counties in the Northwest region saw no new development of multi-family units.

In the Twin Cities, affordable rental units are hard to come by, according to MHP’s Market Watch: Hennepin County. Since 2010, average rent rose 20 percent in Hennepin County. At the same time, the vacancy rate in the county fell from 6.2% to 4.4%. With rent rising and fewer units available, those at the lowest incomes have few options, and with just 2.8% of all affordable rental units produced for households earning under 30% of area median income, production is lagging seriously behind the need.

“This bonding package is a historic, critical investment and represents a bold step toward securing direly needed funding for housing,” said Anne Mavity, executive director of Minnesota Housing Partnership. “It’s a recognition of the affordable housing shortfall Minnesota faces and gets us closer to ensuring every Minnesotan has a safe, affordable home. I appreciate the leadership of Gov. Walz in bringing this investment to housing affordability and making it a priority. This is a great start in tackling an issue that is impacting every Minnesotan.”