Sold Out panel: There are many faces of homelessness and housing instability 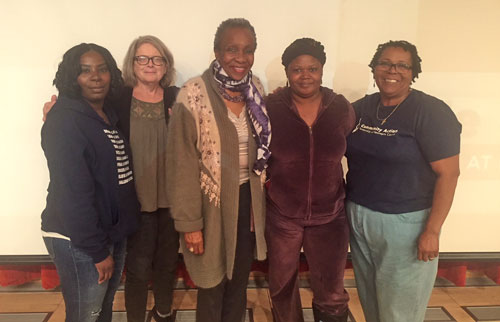 It’s not only damaging financially but damaging to your soul, to your spirit, to your self esteem, to your mental and physical health. There were so many lasting impressions and damage that there’s no way money could make you whole again. - Maria Johnson, former Crossroads resident

One night in 2015, Maria Johnson had a note slipped under her door telling her she had 30 days to find a new place to live. The Crossroads at Penn had been sold and the new owner had plans to “upscale” the property — and ultimately upend the lives of hundreds of residents, like Johnson.

On September 22, as part of the “Racism, Rent and Real Estate: Fair Housing Reframed” event series, Johnson shared her experiences on an all-tenant panel following a screening of the film “Sold Out: Affordable Housing at Risk.” The 2017 documentary produced by Twin Cities PBS centers the story of the Crossroads as an illustration of the loss of affordable rental homes throughout the region. Johnson was joined by Linda Soderstrom, a fellow former Crossroads tenant, as well as tenant experts Jewelean Jackson and December Wesley and Pat Longs, Community Programs Navigator at Community Action Partnership of Hennepin County (pictured, from left to right).

A clear theme emerged: Homelessness and housing instability have many faces.

In sharing her story, Johnson emphasized that affordable housing is an issue, not just for those in poverty, but those of modest incomes, as well.

“I’m in college and I support my mom so that location [at the Crossroads] was extremely important because it was on a bus line, it was convenient to everything and it was affordable,” Johnson told the audience. “I had money set aside in a savings account, but when this happened it was depleted and I ended up losing my job. I had to relocate to a different apartment complex that cost more money but I didn’t make as much money and I couldn’t get any assistance because I made just enough money to miss that. That’s what I stress when it comes to affordable housing. We definitely need to look at the impact on the poor but those of us who make just above what’s considered poor, housing is unaffordable, as well. I’ve had to move three times in past four years and the most recent place had infestation of flies. The crisis is real — and not just for those with no money but for those who are just above that line, because there’s no assistance for us.”

Linda Soderstrom, a tenant leader and former resident of the Crossroads, further challenged preconceived notions about those who struggle with affordable housing.

“I like to break people’s stereotypes,” she said. “I’m reliant on the Section 8 voucher for the rest of my life but I cared for 30 daycare and 30 foster care kids for Hennepin County when I owned my own home at one time, and they were all prenatally exposed to drugs and alcohol. One of them stayed and he’s 30 now and doing quite well. But no one is a typical Section 8 recipient. No one. We’re all individuals. We all want the things in life that everyone else does.”

But, as Soderstrom pointed out, the incoming owner of the Crossroads didn’t see tenants as individuals. In fact, the court case challenging the displacement of the Crossroads residents surfaced troubling sentiments on the part of the new landlord. Not only did Jim Soderberg label the Crossroads tenants “undesirable,” but the judge in the case referenced a previous instance in which Soderberg promised city officials that he would “get rid of the Jerry Springer watchers and bring in the Caribou crowd.”

“They have words for all this,” Soderstrom said. “Reposition, upscale, give it a facelift. Well, you can’t reposition a population. Those are people.”

And, even a record financial settlement in their fair housing claim, couldn’t reverse the harm to hundreds of families, like Johnson.

“The amount that was given did very little to repair the damage that was done,” Johnson said. “It was not only damaging financially but damaging to your soul, to your spirit, to your self esteem, to your mental and physical health. There were so many lasting impressions and damage that there’s no way the money could make you whole again.”

While the circumstance was different than the Crossroads, December Wesley also lost her home because of a property sale. A professional in the medical field, Wesley was a caretaker when a new employer bought the building where she worked — and lived. That new owner not only laid off the employees but told them they couldn’t rent at the property, either. At the time, she had two teenage children, a cat, and a van that had to hold all their possessions.

“It’s very expensive being homeless,” Wesley shared. “People think being homeless you’re a bum, but that’s not the case. I was a working mother, and the kids were going to school and they were clean. But it’s very expensive being homeless. You have to pay for gas to move around to different places, and still do the things you would do in your apartment or house... I also learned that when you’re homeless, your support comes from other homeless people. It doesn’t come from agencies, as you would think it would.”

Jewelean Jackson, a tenant expert who has experienced foreclosure, eviction and homelessness, emphasized that housing instability doesn’t conform to the widespread perceptions, either.

“I always tell people eviction is not the Sheriff coming and kicking your door in, or going to housing court or someone coming and leaving all your things on the sidewalk,” Jackson shared. “None of that happened to me. But at the same time I was evicted because I no longer have my home or an address and I think it’s important for people to know that it isn’t any less stressful. For me it came on the heels of the mortgage foreclosure. I lived at the shelter but my daughter couldn’t fathom being in a shelter. She was in high school then, so she just chose to hop from couch to couch with family and friends… I’ve tried to keep her life as normal as possible. To the point where, last month she competed and represented Minnesota in the Miss Black USA pageant.”

“Part of my struggle is that if I was a drug addict, if my child had a baby stroller attached to her hip, if I was threatening all of you in this room, or all kinds of other things against society, people would be knocking on my door to help. Part of that is because that’s what they expect us to be. Homelessness does not have one face but society has created that one face and, if you deviate, you’re out there by yourself.”

“When people talk about homelessness and eviction and going through foreclosure it’s always, ‘Those people need to pull themselves up by their bootstraps,’ but if the boots aren’t there in the first place what can you do?” she added later in the conversation. “I hope what you take from the viewing [of Sold Out] is to share in your circles that it’s not one face. It’s not one situation. And it’s not all of those people. Everyone in this room has known a person or two or three in that situation, if not currently. We need systems change because this continues to happen and the high powered lobbyists and folks are continuing to perpetuate that which supports them. Often, when we choose to fight and organize and mobilize because we don’t have the resources, we get beat down. But the Crossroads is a good example of when you fight back you can get the result that you want.”

Soderstrom agreed. “The Crossroads was not saved but, a year later, the same owner was trolling to buy Seasons Park [apartment complex] and through all kinds of cooperation, including the new mayor and superintendent of schools, we all got together and a nonprofit buyer made counter offer after counter offer until the seller did call off the dogs. So it’s been saved now for affordability.”

But Pat Longs, Community Programs Navigator at Community Action Partnership of Hennepin County, emphasized the seeming lack of urgency among policymakers and advocates to address the dramatic lack of affordable housing. “There are different people in this documentary who say this is what we need to do,” she said. “And we constantly go to these conferences [about housing and homelessness] and they have big ideas. But nothing is being taken care of. We get tired of talking about these ideas. We need some action.”

And input and engagement from directly impacted communities is critical, Johnson said.

“I would encourage everybody to get involved,” she said. “I know we discussed the upper echelon making decisions regarding us without us. You can’t discuss us without giving us a seat at the table. So we highly encourage people to force them to involve you. Let them know they have no idea what our conditions are. There’s not one face of this crisis.”

Learn more about the affordable housing crisis and watch Sold Out here. And sign up for upcoming events in the Racism, Rent and Real Estate series here.