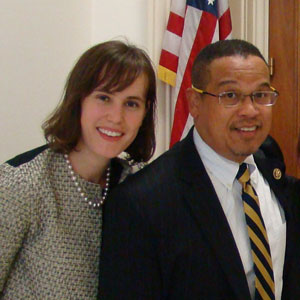 There's been a flurry of activity in both chambers of Congress, with implications for housing and community development. With no agreement on overall spending levels in the House or the Senate, many D.C. insiders speculate that Congress will not pass a budget by the October 1 deadline. Still, appropriations committees in both chambers have approved Transportation, Housing and Urban Development (THUD) bills that largely reject the Trump administration's devastating proposed cuts to critical housing programs.

The Transportation, Housing and Urban Development (THUD) bills have passed the Appropriations Committees in both chambers of Congress. Both bills largely ignored the Trump administration’s budget requests, which, according to the National Low Income Housing Coalition (NLIHC), would have enacted the deepest cuts to HUD since the Reagan administration. Both the House and Senate rejected the administration's proposal to eliminate HOME and CDBG, and the National Housing Trust Fund. They also rejected the President's proposed rent policy changes, which would have increased rent burdens on already financially burdened tenants and allow the Secretary of HUD to waive key provisions that protect tenants. For a comprehensive analysis, read NLIHC’s summary of the bills and check out the impact in Minnesota.

On a vote of 31-20, the House Appropriations committee approved a THUD bill that appropriates a net total of $38.3 billion for HUD, a decrease of $487 million from FY17 enacted levels and $6.9 billion above the President’s budget request. The bill funds Section 8 and Public and Native American Housing $16 million below FY17. According to the House summary, other housing programs are funded $326.4 million above FY17 enacted levels. The House rejected Trump’s proposal to eliminate HOME and CDBG. Each program is funded $100 million below FY17 levels.

The Senate Appropriations Committee unanimously approved its THUD bill and, according to Senator Susan Collins (R-Maine), the bill “is the product of considerable negotiation and compromise” and strikes a balance between investment and fiscal restraint. The bill appropriates to HUD $1.4 billion more than FY17 enacted levels, increasing funding for Housing Choice Vouchers by $1 billion above FY17 enacted level. Despite this increase, advocates are concerned that the bill may not cover the full extent of inflationary costs. Senate Republicans and Democrats also defended the HOME and CDBG, programs that President Trump proposed eliminating. Read the bill summary from Senate Republicans and Senate Democrats. 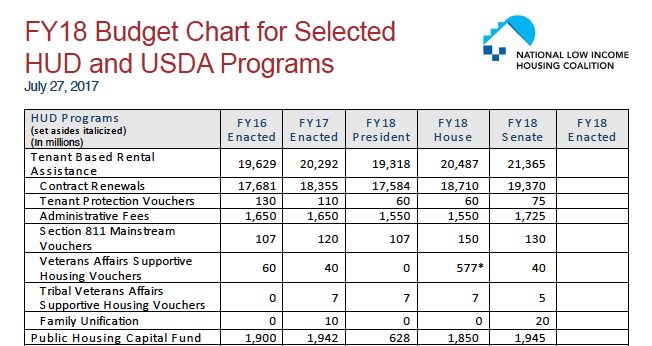 The House Appropriations Committee completed its markup of USDA’s bill, which appropriates $2.6 billion for rural development programs. It provides $24 billion in single family guaranteed loan authority, which is equal to current funding levels and President Trump’s request. There is another $900 million for direct loans for homeownership opportunities and $1.4 billion for rental assistance. One program that is not funded, however, is the Rural Community Development Initiative (RCDI) Grants, which help non-profit housing and community development organizations, low-income rural communities and federally recognized tribes support housing, community facilities and community and economic development projects in rural areas. For more details on other rural development programs, read the House summary.

On July 20, the Senate Appropriations Committee unanimously approved the USDA-FDA appropriations bill, which rejects the President’s proposal to eliminate single family and multi-family housing direct loans. The Senate bill also funds RCDI at $4 million — the same level as FY2017. Read Republican and Democrat summaries of the bill for more information.

The Senate Banking Committee advanced three HUD nominations to vote in the full Senate. Senate Democrats have deliberately delayed the confirmations of some of these nominees, including Pam Petenaude who is awaiting confirmation to be HUD Deputy Secretary and J. Paul Compton Jr. for HUD General Counsel. The Senate did confirm Anna Farias for Assistant Secretary of Fair Housing, and Neal Rackleff for Assistant Secretary for Community Planning and Development before the August recess.

The House Financial Services Committee held a field hearing on “America’s Affordable Housing Crisis: Challenges and Solutions.” Members from both parties acknowledged the importance of the Low Income Housing Tax Credit and cited the Affordable Housing Credit Improvement Act as a means to expand and strengthen the credit. The ACTION Campaign provided a comprehensive summary of the hearing on their blog. Majority and ranking members comments are also available. 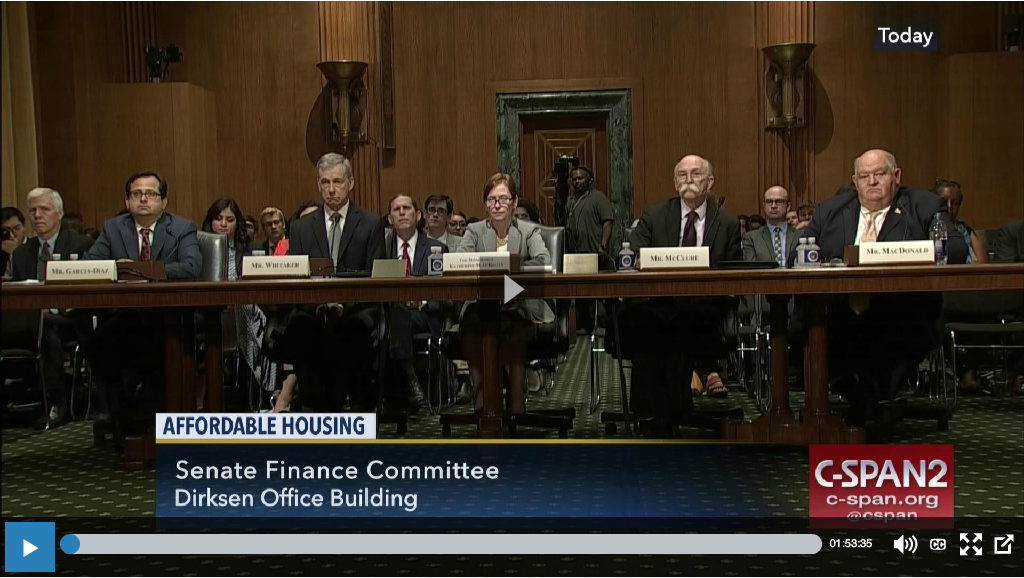 The Senate Banking Committee has held two hearings this summer on housing finance reform. The hearings have focused on how to preserve and enhance the role of small lenders in providing access to capital in rural and underserved markets. Committee members from both parties expressed interest in passing a housing finance reform bill this year. There seems to be bipartisan consensus that any reform legislation must address affordable housing. Housing finance reform is of interest to affordable housing advocates because it will determine access to long-term, fixed-rate mortgages for low income families and affordable rental housing and funding for the National Housing Trust Fund.

On July 14, a group of Senate Republicans sent a letter urging Secretary Carson to rescind the Affirmatively Furthering Fair Housing (AFFH) rule. The letter contends that the rule encroaches on local government authority and decision making. Days later, Secretary Carson stated that while he will not reverse the rule, HUD will “reinterpret” the rule. Read more at HousingWire.

On July 21, the House Financial Services Subcommittee on Housing and Insurance held a hearing entitled “NAHASDA: 20 Years On.” The Native American Housing Assistance and Self Determination Act of 1996 (NAHASDA) is a housing assistance program for Native American tribes. The hearing, held in Wisconsin, focused on “federal programs that affect housing for Native American communities and reservations.” NAHASDA authorization ended in 2013 and the program has continued with severely inadequate funding. Authorization would bring stability and, hopefully, adequate resources to the program. The House has twice passed reauthorization for NAHASDA but the U.S. Senate has failed to take up the legislation. The Housing Assistance Council made the case for reauthorization in The Hill earlier this year.

According to NLIHC, advocates in 28 states and the District of Columbia hosted more than 60 local events as part of a national week of action in late July. A number of members of Congress introduced resolutions addressing housing poverty and homelessness and, on July 29, the campaign launched “Our Homes, Our Votes” to increase voter registration, education, and mobilization among low income renters and affordable housing advocates. Here in Minnesota, the Homes for All coalition hosted three screenings of MHP's new documentary, "Sold Out: Affordable Housing at Risk," mobilizing more than 100 advocates and elected officials in the Twin Cities, Duluth and Fargo-Moorhead. See pictures from the Twin Cities event here. 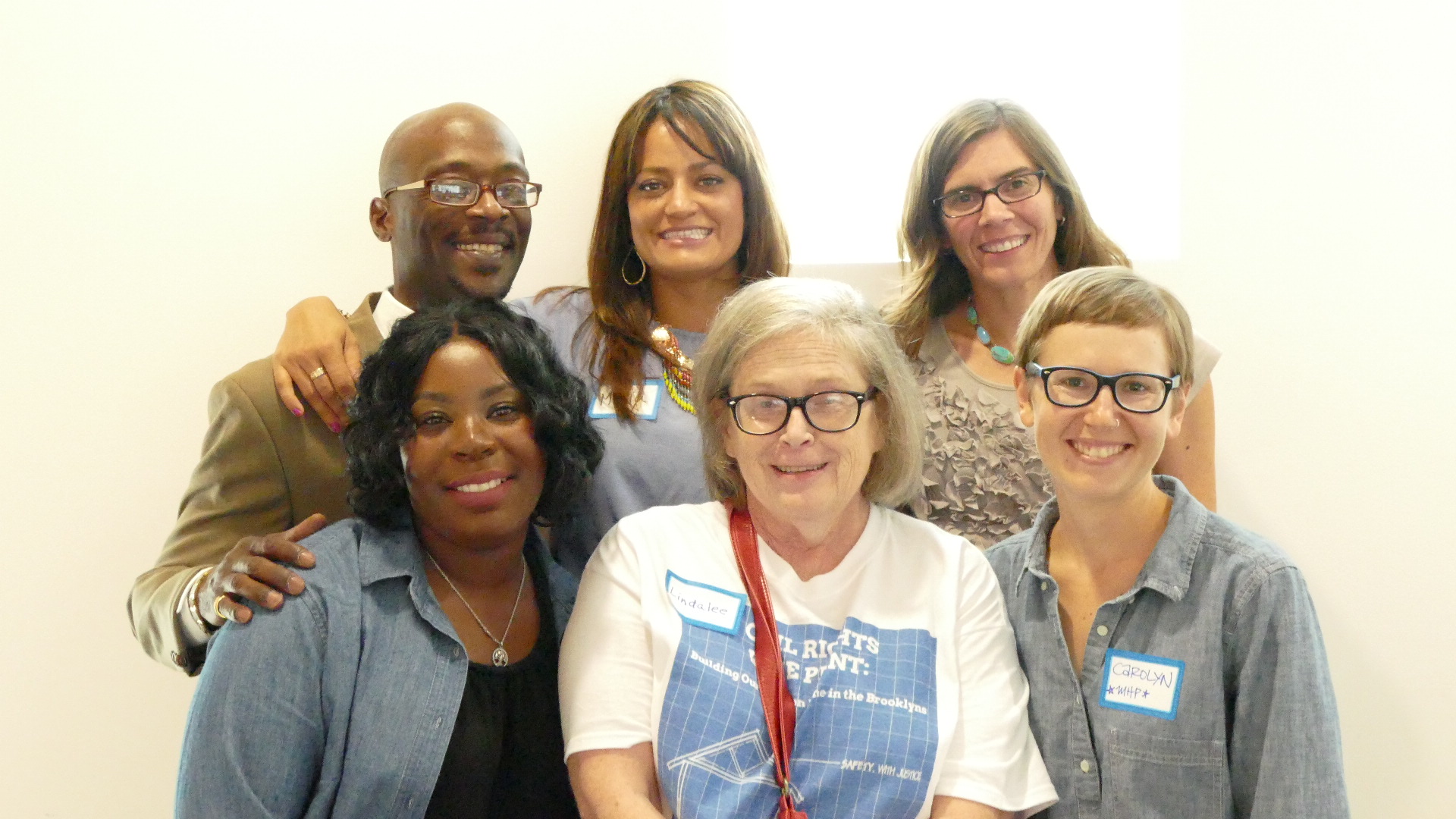 Panel of speakers at the Twin Cities "Our Homes, Our Voices" event on July 27. More photos here!

The National Low Income Housing Coalition released a new report on the benefits of reforming the mortgage interest deduction.

Executive Order 13895 established a 15 member Advisory Council on Infrastructure. President Trump will appoint members representing sectors like real estate, construction, and local economic development. The council will make recommendations on federal funding. While the EO does not explicitly list housing, housing advocates will advocate for a seat at the table.

Congresswoman McCollum (pictured right) is hosting “Listening Over Lemonade” town hall on Wednesday, August 9 from 2:30 to 3:30 p.m. at the East Side Freedom Library in St. Paul.