The voices of tenants and owners, advocates and elected officials raise the urgency and opportunity to address the loss of affordable housing in a new documentary. Produced by Twin Cities PBS, in partnership with local advocates and funders, “Sold Out: Affordable Housing at Risk” reveals the price we all pay when families are pushed out of our communities as modestly priced units are replaced with upscale developments.

It’s been more than a year since the ultimatum given to hundreds of tenants at the Crossroads at Penn: Pay massive rent hikes, pass stringent tenant requirements — or be forced out into a white hot rental market with very few options for low-income households or those on government assistance. A year later, more than 95% of the tenants are gone — but it’s not just the families who’ve suffered.

“We all pay the price when low-cost rental housing is upscaled for higher income households and families are displaced,” says Chip Halbach, executive director of the Minnesota Housing Partnership. “How we answer this challenge in the near term will impact our region’s economic strength and the resilience of our social fabric. But we must act soon. Unlike cities like San Francisco and Seattle, where housing affordability has spun out of control, we still have time to make the Twin Cities a place where people at all income levels can live and contribute.”

As evidenced in MHP's 2016 report by the same name, strong growth among renter households with higher incomes — above $50,000 per year — has created a strong incentive to re-position older properties with diverse populations for younger, more affluent households. The new 60-minute documentary provides first-hand accounts from numerous former residents of the Crossroads at Penn, sharing the devastating impacts of being pushed from a place where some had resided for decades. 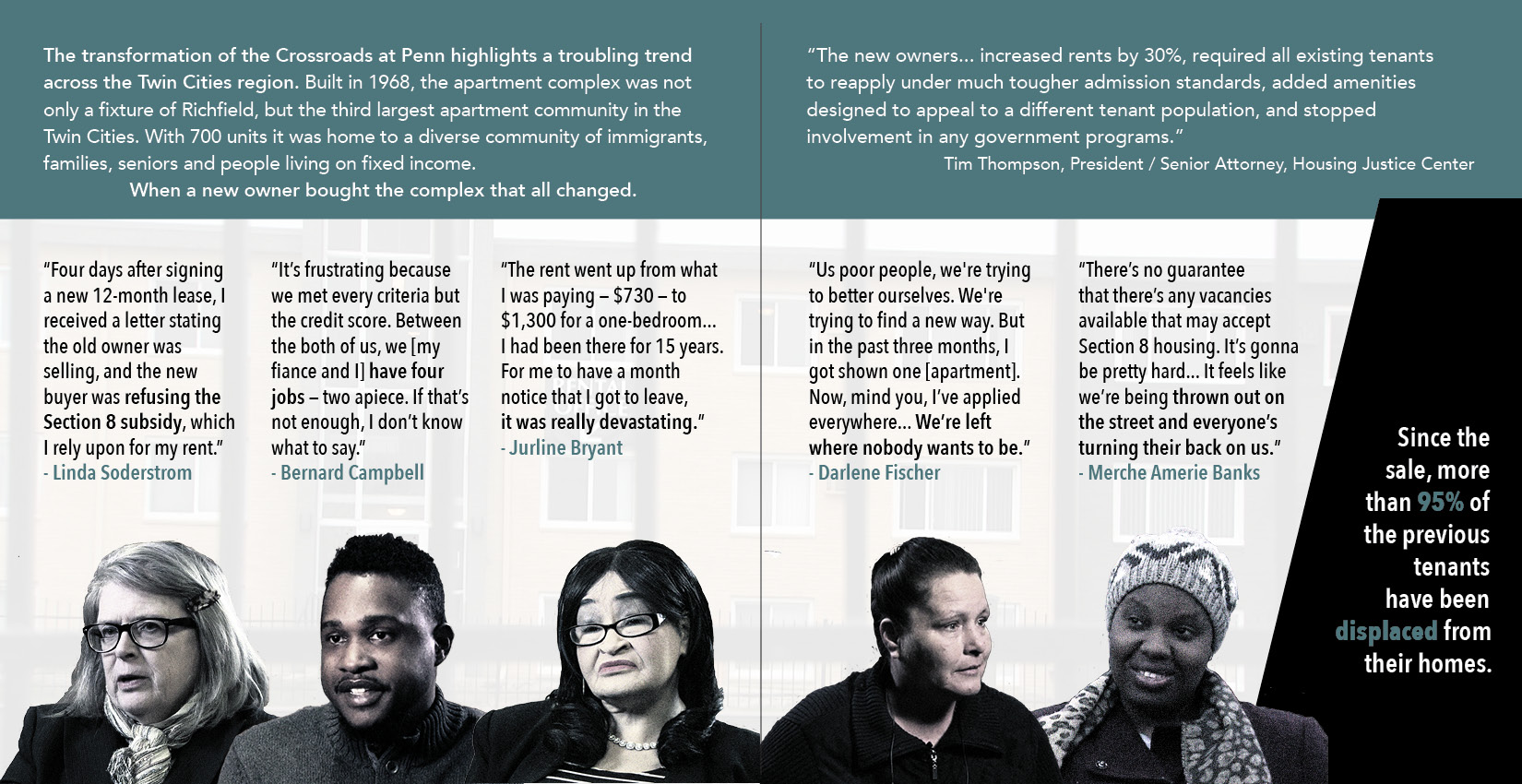 “It was a wonderful place for all of us families," says a former Crossroads tenant. "We had neighbors, we had relationships, our community, and also the schools, the transportation, even employment. It was a good place for all of us.” But when residents were forced out by new standards and increased rent, they were dispersed from the support systems and services that made ends meet.

"It’s greatly compounded the difficulties of their lives, figuring out how to get so much farther to their job, to their doctor, to the grocery store," says Tim Thompson, President and Senior Attorney at the Housing Justice Center. The film also lifts up the work of tenant organizing and highlights a landmark legal suit brought by the Crossroads residents under the Fair Housing Act.

The impacts of apartment upscaling, like the Crossroads, ripple far beyond the individuals and households forced to move. Through interviews with elected leaders, researchers, educators and employers, the films reveals how the uprooting of families negatively impacts area businesses and local schools as well as the social fabric and economic functioning of our communities. It makes clear that the current housing market fails residents struggling to make ends meet — and all of us pay the price.

There is no single or simple solution but there is one certainty: Ensuring adequate affordable homes impacts the lives of every single resident of the region. From tenant organizing to social impact investing, community and elected leaders are putting forward strategies to keep low-cost rental housing safe, stable and available to the workers and families who play a critical role in the economy and life of the region. By hearing directly the voices of those impacted and understanding the trends driving this upscaling, “Sold Out” aims to set the stage for a community-wide conversation focused on enacting policy and lifting up solutions from the grassroots, grasstops and public-private partnerships to stem the loss of affordable housing in the Twin Cities.

Now is the time to act. We hope you will join us in this critical discussion.

Tune in to TPT MN at 1 p.m. on June 11 or TPT Life at noon on June 18 to watch it on air! Follow the hashtag #SoldOutRenters on Twitter for ways to engage!