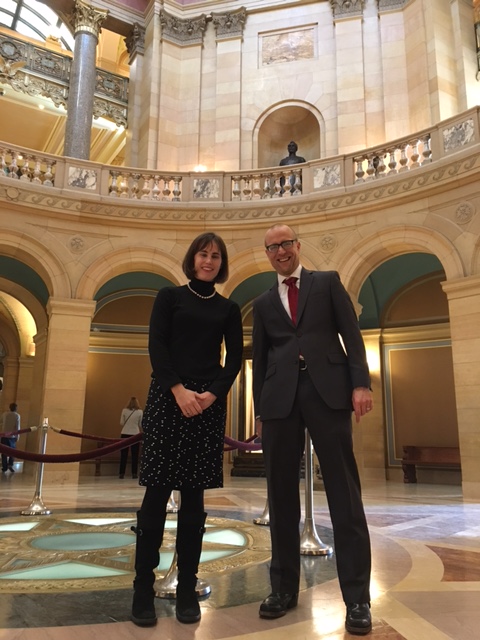 The 2017 state legislative session is underway, and MHP is back at the capitol. November’s election put Republicans in control of both the House and Senate, putting advocates on the defensive in some issue areas. But MHP’s policy team is optimistic.

Why? Because affordable housing is a bipartisan issue. Champions on both sides of the aisle recognize that where we live impacts everything. Having a safe, affordable place to call home is central to the health, education, and economic success of Minnesota families — in all corners of the state.

Already, MHP has been meeting with legislators, educating new lawmakers on the critical importance of housing and laying the groundwork for our 2017 policy agenda. Thus far, legislators from both sides of the aisle have receptive to our key priorities, including:

Working with our partners in the Homes for All coalition — a statewide coalition of more than 150 nonprofits, faith communities, housing developers, school districts, health providers and local units of government — MHP has made bonding our top priority this session.

Next on MHP’s agenda is a new proposal: Local Housing Trust Funds (LHTF). MHP is preparing a bill that outlines clear steps for cities, counties or regions to establish and fund local trust funds for local housing development. These Trust Funds are a consistent, flexible resource that give communities leverage to attract public and private funding to jumpstart projects in their area that draw investment and jobs.

And their advantages provide ample opportunity for bipartisan support. Because they are locally administered, they enable communities to prioritize developments that provide the biggest benefit to local residents. And, for some Greater Minnesota communities that are consistently unable to access funding from the Minnesota Housing Finance Agency (MHFA), LHTFs would provide an important resource. The MHP policy team is currently collecting feedback from city and county government officials and housing leaders across greater Minnesota about how to best fund and administer LHTFs.

Another priority for MHP this year? Bolster and protect MHFA’s Economic Development and Housing Challenge Fund. Between 2013 and 2015, the Challenge Fund assisted in the creation of more than 2,300 multifamily rental units across Minnesota. It’s a critical financing resource for the development of permanent rental housing that’s affordable to workers in Minnesota’s fastest-growing industries and to Minnesotans with incomes at or below 80 percent of state or area median income. Maintaining the Challenge Fund is an important part of propelling economic growth in Minnesota.

We’re not alone in making housing a priority at the capitol. Next week, we’ll join hundreds of organizations for the Homes for All Week of Action, showcasing why investing in where we live is a critical way to make our economy strong and Minnesota families thrive. Learn more and participate in the events listed here.

Stay up-to-date all session long by joining our Capitol Connect email list and following us on Twitter.