The Little HRA that Could: MHFA Funds White Pine Apartments in Cloquet 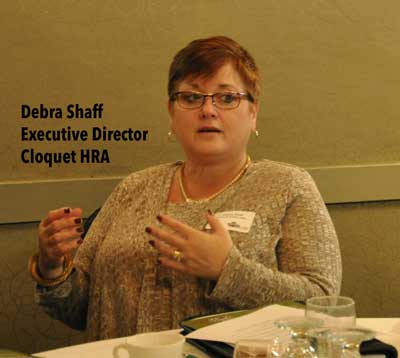 I wanted to pinch myself,” says Debra Shaff, Executive Director of Cloquet Housing and Redevelopment Authority.

Last month, Minnesota Housing Finance Agency (MHFA) announced that it would provide $542,000 in funding and an estimated $5,717,724 in 9 percent tax credit equity toward a project Shaff has been working to make happen since 2015.

The White Pine Apartments, a 35-unit affordable housing complex in Cloquet, Minnesota will provide both workforce and supportive housing in a community that hasn’t seen new construction in many years.

Shaff and her colleagues at Cloquet HRA decided it was time to meet those challenges head on after a housing study released in February 2014 forecast the need for 260 new units of rental housing in Cloquet and nearby Scanlon by 2025. Minnesota Housing Partnership provided $10,000 toward the study — and Cloquet HRA leveraged it as a tool to take action. But, when Shaff presented the results of the study to her board, they seemed uncertain about Cloquet HRA’s capacity to address the problem.

Shaff knew the small staff at the Cloquet HRA couldn’t make affordable housing happen on their own, so she sought the advice of Barb Sanderson, Itasca County HRA Commissioner and longtime affordable housing advocate. Sanderson suggested Shaff develop a team to join MHP’s Housing Institute, a yearlong program that builds the capacity of rural communities to meet their development needs through direct assistance, skill building, and guidance from MHP’s community development staff.

Cloquet HRA initially invited 25 individuals to a meeting to learn about the Housing Institute. Attendees seemed intrigued but hesitant to commit. Shaff remained undeterred. “That was challenging and frustrating, but when I get an idea, I can be exuberant,” Shaff says. “It was only when I met one-on-one with the people who were key to the project that they agreed. They couldn’t turn me down.”

Shaff assembled a team that represented the Cloquet community, including individuals from the faith community and the Salvation Army, the police chief, a former Cloquet mayor, the Carlton County Director of Human Services, and a nonprofit developer based in Duluth. As the team continued working on the project, they were joined by a retired director from United Way and a retired school superintendent. Shaff and her team completed the Housing Institute in October 2015 and, in January, they began the search for a qualified developer that could bring their vision for workforce and supportive housing to life. At that point, the team had less than six months to find a developer and secure all the necessary elements for a competitive application to MHFA.

Shaff never expected the project to be easy. “I was anticipating lots of challenges, but we never had any real objection,” Shaff says. “Each time we made a presentation and people voted in favor of the project, I’d stamp my feet and twirl all around. There were a lot of happy dances in the hallway.” Even at the neighborhood meeting, no one objected.

Still, the Cloquet team had some obstacles to overcome when assembling an MHFA application. First, neither Shaff nor most of her teammates had residential development experience, a challenge intensified by the aggressive timeline necessary to get the application completed by the deadline. The Cloquet team chose a developer — Commonwealth Development — that has never before worked in Minnesota. And applicants rarely receive funding from MHFA the first time they apply — and this was Cloquet HRA’s first application ever.

But the Cloquet team was equipped with all they needed to succeed. The Housing Institute had provided the team with the fundamentals — an understanding of development best practices, access to a network of developers and peers working on similar projects, and guidance in formulating and tackling a project plan. The team also had the expertise, guidance, and support of MHP Community Development Managers Sarah Bellefuil and Cherre’ Palenius. During the Housing Institute, Bellefuil acted as team liaison and worked with the Cloquet team for over a year on the development process. Then, after the Institute ended, Palenius came on board to help with the search for a developer and to provide her expertise in housing development finance. During the Housing Institute and after, Bellefuil and Palenius met with the team in Cloquet to hammer out details and provide assistance to help ensure the project’s success.

After more than a year of direct involvement with the project, Bellefuil and Palenius knew that the Cloquet team had a shot at securing MHFA funding.

“It is such a great project and they had all the pieces in place by the time the application was made — a housing study that showed need, community input, available land, informed city officials and neighbors, supportive housing included in the project, and meetings with MHFA staff prior to the project,” Bellefuil says.

The way Shaff describes the project, it’s easy to see its appeal. She and her team envisioned “universal housing” designed to meet a variety of needs in the Cloquet community. The units will be configured to allow residents to “age in place,” with features like in-room laundry and wheelchair accessibility to ensure easy mobility. The design incorporates seven units of supportive housing and units with two- and three-bedrooms targeted to working families. The complex will be nestled in a walkable residential neighborhood near the new middle school and existing high school, churches  and several parks, and will utilize land that has been sitting vacant. When Shaff imagines White Pine apartments, she sees children playing in the yard and riding their bikes around the neighborhood.

There’s still plenty to do before families can move in. The Cloquet team must complete a land survey, finalize the project design, take construction bids, and complete MHFA’s four-page project checklist. But Shaff and her teammates are confident they can get it done.

“I have a lot of peers at other housing authorities in communities even smaller than Cloquet who have a lot of pressure to develop housing because the housing in their community is dated or needs replacement,” Shaff explains. “They don’t know where to begin. They don’t know how to do it. They have the same challenges that we  face here in Cloquet. My message to them is ‘You know what? If a little housing authority in Cloquet with a staff of three people can do it, you can do it too.’ It’s just learning the tools, believing in yourself and believing in your project. There are organizations and developers that are willing to work with you if you have the vision and volunteers willing to help carry the project along.”

Read our recent report on the Housing Institute here and check out the 2016 MHFA funding announcement here.