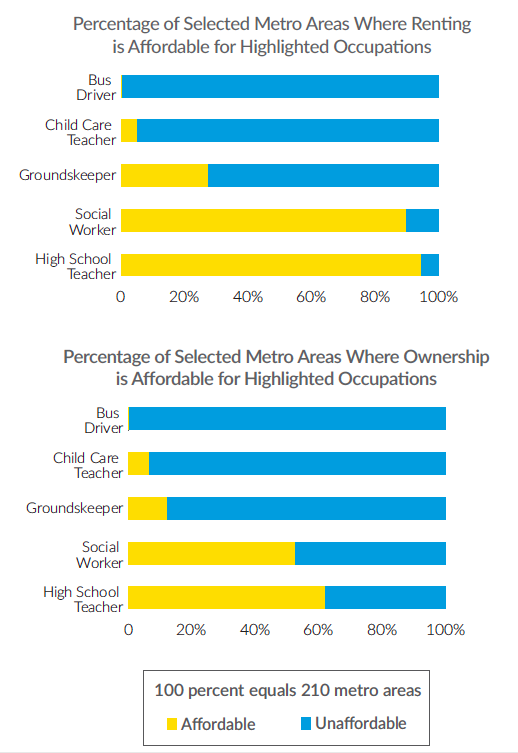 You’ve probably heard the phrase, “It takes a village to raise a child.” No place is this more evident than at a school, where numerous staff — from bus drivers, to teachers, to groundskeepers — work together to make kids’ futures bright.

A new report released last week by the National Housing Conference and the Center for Housing Policy shows that an essential piece of that village is lacking: affordable housing.

“None of these occupations earned salaries that were high enough to guarantee either renting or owning a home in every metro area included in this report,” the authors conclude.

Here in Minnesota, the landscape reflects the national trends. The situation is bleakest for bus drivers, for whom rental and homeownership costs greatly exceed median incomes in the Duluth and Minneapolis/St. Paul metros. While a two-bedroom rental in Duluth is affordable for child care workers and groundskeepers, it’s out of reach in Minneapolis/St. Paul — and homeownership isn’t feasible in either metro. In fact, only teachers and social workers earning median incomes can afford renting or owning a two-bedroom home in the two Minnesota metros studied.

Click here for an interactive database of other occupations

The report points out that a lack of easy access to quality affordable housing makes it a challenge for schools to retain staff. Many staff are forced to seek housing far from work, which strains budgets and schedules. Jeremy Schroeder, Policy Director at Minnesota Housing Partnership, says we need to do more for school workers.

“Teachers and others who do the important job of helping our kids deserve to live in the community they work,” Schroeder says. “They shouldn’t be forced to commute from other communities or have to settle for substandard housing.”

“Teachers and others who do the important job of helping our kids deserve to live in the community they work,” Schroeder says. “They shouldn’t be forced to commute from other communities or have to settle for substandard housing.” Jeremy Schroeder, MHP Policy Director

Chip Halbach, Executive Director at Minnesota Housing Partnership, points out that the 2016 Paycheck to Paycheck report highlights a reality for many individuals—not just school workers. Incomes continue to lag behind skyrocketing housing costs in Minnesota and across the country.

“While some are doing well in a strengthening labor market, for too many the rising cost of housing is outpacing gains in income,” Halbach says. “We need to maintain our efforts to ensure decent and affordable housing for all Minnesotans.”

Learn more, and explore housing affordability for other occupations, here.