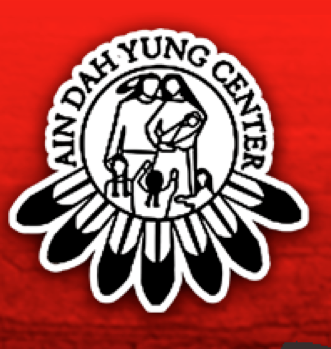 It was June 2016 and the Executive Director of the Ain Dah Yung Center (ADYC) was on a conference call with half-a-dozen partners. For months, they had been working urgently to secure a site for an innovative urban American Indian youth permanent supportive housing project — a first-of-its-kind in the state, maybe even the nation. Just days before a critical funding application was due, they had found the perfect spot.

Or so they thought.

With 48 hours to go, the owners of the properties that would make way for the new development decided they didn’t want to sell. Foster remembers that moment vividly, because the breath-taking disappointment was immediately met with undaunted optimism from Chris Wilson, Director of Real Estate Development for Project for Pride in Living (PPL).

“You know what,” he said, "it’s only halftime as far as I’m concerned. We’ll make this happen.”

That level of commitment and determination has been the hallmark of ADYC’s vision to create an urban supportive housing project specifically designed to address the distinctive needs of American Indian young people aged 18 to 24. 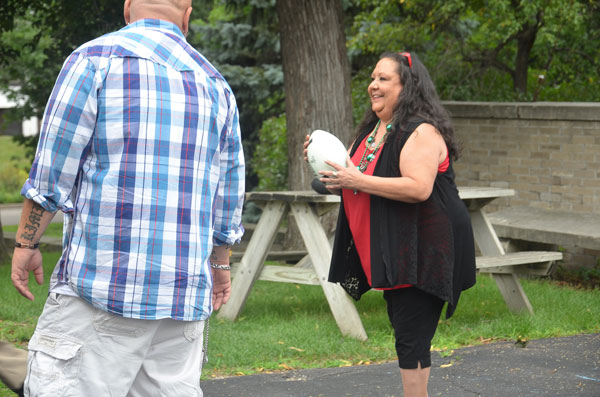 And that gap in services is even more pronounced for youth in their later teenage years and early 20’s. “What we’re finding is that a huge number of youth in general are falling through the cracks when they turn 18, because they either age out of foster care or are now treated like adults,” Foster said. “Often times that doesn’t work for youth; they’re still teenagers. We realized that while ADYC has a Native specific shelter and transitional living program, we didn’t have a means to address young people who are having significant hardships when they turn 18, 19, or 20 and can no longer stay in a TLP.”

But addressing that need — and building an ambitious, multi-unit housing development — was beyond ADYC’s current expertise and experience. “We had done some minor capital campaigns but nothing as significant as this,” Foster says. ADYC knew they needed a partner and, according to Foster, the Minnesota Housing Partnership — and particularly Bill Vanderwall, Community Development Manager — was the linchpin in providing the technical expertise and facilitation to turn aspiration into action.

“We started off with an advisory council that included board members, folks from the community and most importantly Native youth, and began brainstorming what this would look like, where it would be, and what was important to the kids,” Foster says. “We had numerous meetings visualizing what this project would need to have to be truly successful.”

The youth played a key role in identifying critical aspects of the project. At first, project leaders considered locating the development in Minneapolis, for instance closer to Native communities like Little Earth and along Franklin Avenue. The youth strongly disagreed. “The youth on the advisory council stood up and said ‘Absolutely not,’ Foster recalls. ‘That’s exactly where we’re trying to get away from. That’s where the drug dealers and gangs are.’ They made it very clear they wanted it to be in St. Paul near all the rest of ADYC.” They also made it very clear that they needed easy access to services like schools, grocery stores, health care facilities and public transportation.

Working with Mike Laverdure, an architect with DSGW Architects and a Turtle Mountain Chippewa, that vision came to life on the page, promising a beautiful structure with distinctive Native features. “We're so incredibly grateful for the work that Mike Laverdure and his partners have provided designing this project," Foster says. "Their time and efforts have been priceless.” Also recognizing they needed a development partner, ADYC engaged with PPL to envision a co-ownership model that would ensure Native ownership of the project rather than simply providing the services. And, with all the needs of the youth in mind, the team found a perfect spot a block off the corner of Dale Street and University Avenue in St. Paul.

And that’s when the collaboration and passion of the team made the difference — pulling a come-from-behind victory despite the "halftime" set back. 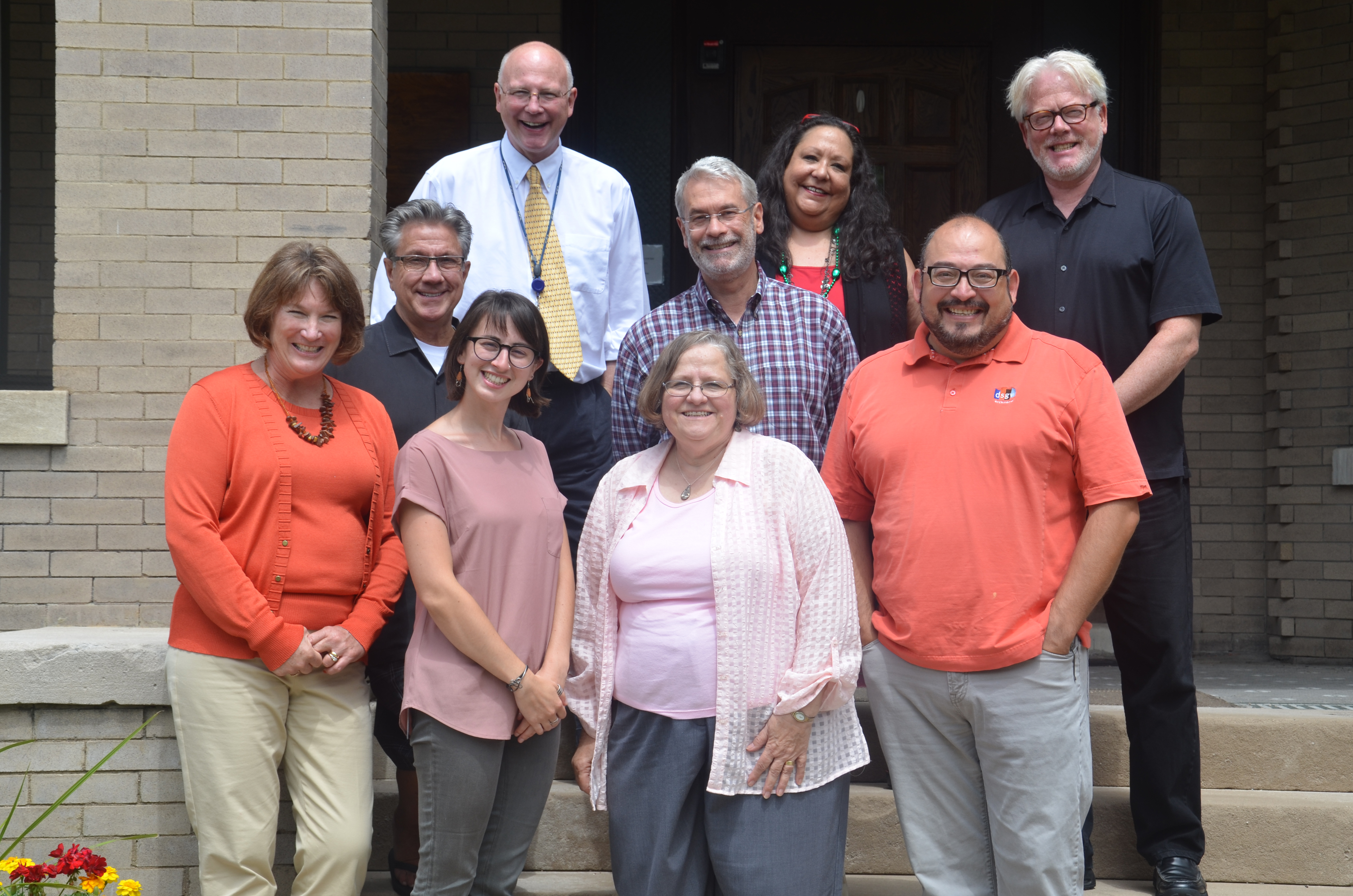 David Glass — a board member for ADYC — was on that transforming conference call as well. When he heard the property owners weren’t interested in selling, he asked if he could set up a meeting with their son. “The next day, David proceeded to showed him the pictures of what we wanted on the land, the vision and mission of ADYC, and the son fell in love with it,” Foster says. With just a few hours to spare the following morning, a purchase agreement was completed and the funding application was submitted to the state. “This purchase agreement also would not have happened without the commitment and assistance from Barbara McCormick and Chris Wilson from PPL," Foster adds. "We're so blessed to have them as our partner.”

The passion behind the project is tied to ADYC’s culturally responsive approach. It’s not surprising to Foster that mainstream services fail Native youth. And, without addressing their unique needs, the extreme disparities within Native youth homelessness will persist.

"American Indian youth are confined by the aftermath of long-term historical trauma, because it's still very present," Foster says. "What people don’t understand is that there were hundreds of thousands of Native children who were still being taken from their families at the age of 5 and placed in board school for up to 13 years through the mid-1970’s. So today’s children have parents or grandparents who were raised in boarding schools and came out of those institutions traumatized; their culture stripped from them. They were emotionally, physically, sexually abused and let go into society to try to survive."

"The reason we have so many Native homeless youth is, in part, because of this historical trauma,” Foster says. “The only way for healing and growth to happen for our youth is to reestablish their sense of Native identity."

Foster knows that inter-generational impact firsthand. “My grandparents were in boarding schools and then did the best they could to raise a family which included my mom - it was a challenging childhood for her,” she says. “And then being raised by her, I ended up living in two separate worlds. On the one hand, it was okay and wonderful to acknowledge that we were American Indian at home on the reservation with family, but somewhere on the trip back to Madison, all of a sudden it became taboo again. You didn’t admit you were Indian because it was potentially dangerous. People don’t realize why we’re still trying to get beyond all the recent trauma faced by our people.”

"The reason we have so many Native homeless youth is, in part, because of this historical trauma," she continues. “The only way for healing and growth to happen for our youth is to reestablish their sense of Native identity. Right now our homeless youth are often walking around in a world that is filled with devastation, poverty, alcoholism and abuse — things that are a result of this boarding school era that was not that long ago. The only way to heal from this is for them to be engaged in — or reengaged within — Native traditions and culture in a good way, to know what it truly means to be American Indian and reestablish that sense of pride and self identity. It’s time to recognize that without this crucial foundation, our Native youth will continue to struggle to successfully pursue personal, educational and employment goals — and we'll continue to see these high disparities.”

That emphasis on building that identity is embedded in the design of the project, as well. 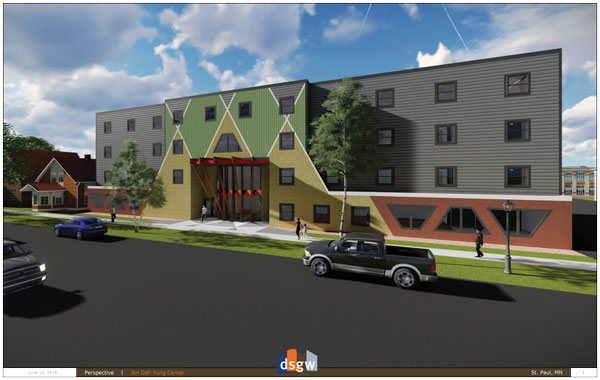 “The design of the building is very Native; you’ll be able to tell right when you walk up,” Foster explains. “Gathering as young people, as families, as elders is a huge part of our culture. We do a lot of the traditional teachings, learning, drumming and singing in gathering circles. So every floor has a circular gathering room. The main floor has a beautiful culture center, as well. To the mainstream eye it might look like any big meeting room, but it’s being designed to go pitch black. When we do ceremonies in a room it needs to be entirely blacked out — and there’s no room like that in the Twin Cities, maybe even the state. This sacred space is so critical to facilitating the ceremonies that help heal of our communities, and particularly our young people.”

The living spaces were created with intention, too. “We’re designing small studios with really small kitchens, because we don’t want to encourage kids to stay in their rooms,” she says. “In addition to the circular gathering spaces on each floor, there will be huge main kitchens that open into dining areas. The idea is to encourage kids to come out and create new healthy networks. What we’ve done for years is take kids off the street, put them in a one-bedroom apartment, hand them the keys and walk away thinking we’ve done a great thing for our kids. But within a few months, they’re on the streets again because of the isolation. They end up going back to what they know, even if it’s not advantageous. So we’re designing the entire building to eliminate that sense of isolation and, through our Native ways, encourage opportunities to gather and build on their strengths with others.”

"We’re designing the entire building to eliminate that sense of isolation and, through our Native ways, encourage opportunities to gather and build on their strengths with others.,” Foster says.

For Bill Vanderwall, an MHP Community Development Manager, working with ADYC has been a great opportunity. "It's been a privilege to help ADYC achieve this incredible vision for Native young people in growing strong and with support," he says. "The organization is now prepared to take on this project and connect with PPL as project partners. Together, and with many supporters, they will make sure the vision becomes a reality.”

The ADYC board and staff are so incredibly grateful to Bill Vanderwall for his technical assistance and everything else that MHP has provided for us thus far,” Foster adds. “We would not be where we are today without them.”

Click here to learn more about the incredible work of ADYC — and contact Deb Foster for ways to support this project.