Updating the Fair Housing Plan for the Twin Cities Region

When it comes to regional planning for fair housing, the Twin Cities could soon be a model for the rest of the nation.

In May, a group of government officials and community leaders started a year-long process to more deeply investigate the barriers to fair housing faced by communities of color and rewrite a key document that informs how federal dollars flow into the Twin Cities region.

Precipitated by a legal complaint to the U.S. Department of Housing and Urban Development (HUD) brought by several community groups, the cities of Minneapolis and St. Paul joined by other local government grantees of HUD agreed to go back to the table — a new table shared with representatives of communities of color — and dig deeper into its Regional Analysis of Impediments to Fair Housing.

"Families deserve real housing choice and increased opportunity to move ahead," Gustavo Velasquez, HUD Assistant Secretary for Fair Housing and Equal Opportunity said in a May statement. "These agreements place Minneapolis and St. Paul at the forefront of city and regional planning that incorporates fair housing as one of its stated goals.”

How will that happen? Who’s involved? What’s the plan? MHP was tapped by HUD as the facilitator of the process — one that is complicated and challenging, but also rich with authentic dialogue and community engagement that aims to get at the root of housing inequity in the region.

Here’s the who, what, when, where and why of this important process.

As HUD explained in its May release, the process underway is part of a voluntary compliance agreement between HUD, the cities of Minneapolis and St. Paul, and several community organizations that filed complaints in 2015, including the Metropolitan Interfaith Council on Affordable Housing (MICAH) and three Minneapolis neighborhood organizations: the Webber-Camden Neighborhood Organization, the Whittier Alliance, and the Folwell Neighborhood Association.

Because the cities receive federal funding from HUD, through the Community Development Block Grant and HOME programs, they are required to abide by the agency’s rules. In their complaints, the organizations claimed that the cities failed to comply with HUD’s civil rights requirements, including the obligation to affirmatively further fair housing.

In response, the cities entered into an agreement with HUD that requires they meet several key requirements — so they can continue to receive federal funding. While the cities disagreed with most of the points raised in the complaint they did agree that the region’s fair housing plan could and should be improved. 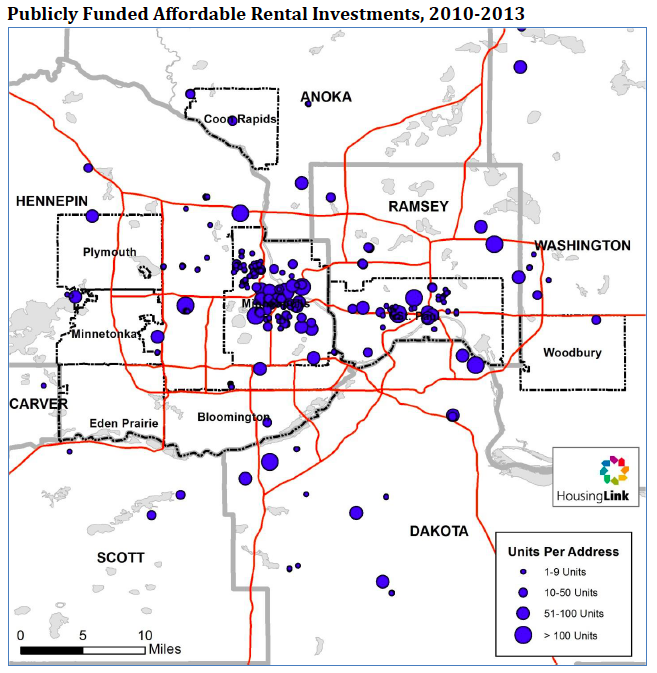 What will the process produce? The short answer: An addendum to the region’s fair housing plan, called the Regional Analysis of Impediments to Fair Housing (AI).

An AI is required for any jurisdiction to receive its HUD community development funding — to prove that it will use that money to affirmatively further fair housing. The AI serves a dual purpose. It identifies barriers that affect fair housing, covering public and private policies, practices, and procedures affecting housing choice. It also serves as the basis for fair housing planning, providing essential information to policymakers regarding how these barriers to fair housing can be addressed

In updating its Fair Housing Plan, the cities are tasked by HUD with specifically focusing on “identifying patterns of integration and segregation, racially or ethnically concentrated areas of poverty, disparities in access to opportunity, and disproportionate housing needs.”

In addition, HUD specified that the Fair Housing Plan for the Twin Cities must:

At the center of this regional process is the FHIC: the Fair Housing Implementation Council.

Established in 2002, the FHIC coordinates efforts to ensure HUD obligations to affirmatively further fair housing are carried out throughout the metro housing market area. Members of the FHIC are the counties of Anoka, Dakota, Hennepin, Ramsey, and Washington, the Metropolitan Council, the Community Development Agencies of Scott and Carver Counties, and the cities of Bloomington, Eden Prairie, Minneapolis, Minnetonka, Plymouth, Coon Rapids, Saint Paul, and Woodbury. The primary role of the FHIC is to create the Fair Housing Plan (or Regional AI) — and each of its jurisdictions then add local data and adopt its conclusions. 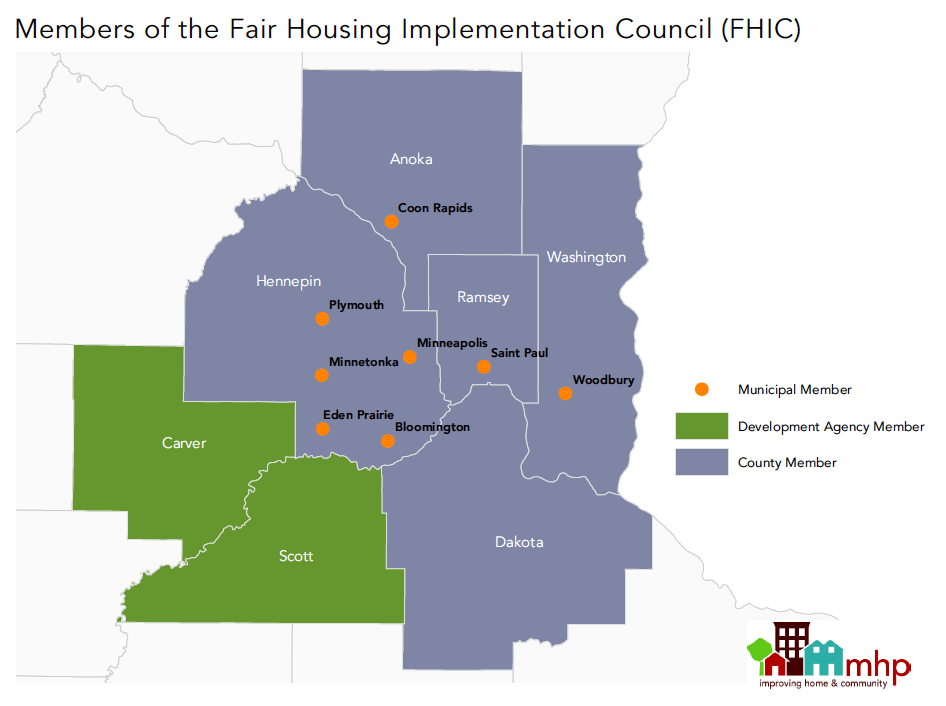 In this special case, though, HUD didn’t leave it to the FHIC to complete the work in a vacuum. It created a Fair Housing Advisory Committee, facilitated by MHP and comprised of city and county officials, members of the FHIC and community groups, to ensure key stakeholders participate in this process.

he committee includes representatives from:

Now convening on a monthly basis at open meetings, the role of the Committee as required by HUD entails:

Mentioned above, much of the work will be conducted by a consultant. This month, following input from the committee members, the FHIC released a request for proposals, spelling out the work the consultant will be be tasked to accomplish and the qualifications to ensure it gets done well.

From data analysis, policy review and community engagement feedback the consultant will not only identify impediments but also provide recommendations to address them. To that end, the advisory committee articulated several key qualifications for the consultant, including a significant record of producing Analyses of Impediments, a demonstrated ability to build relationships with communities and organizational leadership from diverse cultural and geographic communities and to effectively partner with community leaders and stakeholders in the community engagement process; and knowledge and understanding of the historic discriminatory policies in the public and private sectors that intentionally or had the effect of segregation and displacement, as well as the legacy of these policies today.

The clock is already ticking and the timeline is aggressive. Several key dates are driving the process.

First, HUD has set May 15, 2017 as the deadline for the updated Fair Housing Plan. To meet that date, though, the cities need at least two months to shepherd it through the approval process, which means a concentrated data collection and community engagement effort over the final four months of 2016.

Interested in the process? Stay tuned to the MHP blog and find public documents from the committee here.