2x4 Report Contains Good News on the Housing Front, Except for Low-Income Renters

MHP’s recently released 2x4 report shows some of the lowest foreclosure and eviction rates of the past decade, and a boom in multifamily home construction. But low rental vacancy rates and steadily climbing rents continue to tighten the competition for lower-priced rentals, putting further strain on most renter households.

The median home sale prices rose in metro areas throughout the state for the fourth year in a row, with the greatest increase in the Twin Cities metro. In 2015, the number of closed sales hit a 10-year high in the Twin-Cities, St. Cloud, and Brainerd. The Twin Cities metro saw the median sale price increase to $221,190 by the end of 2015, up 7 percent since 2014. Increases in housing prices may reflect a competitive homeowners market in most metropolitan areas. In the Twin Cities, St. Cloud, and Brainerd, the supply of housing on the market decreased by roughly 13 percent between 2013 and 2015.

The state rental market also saw an increase in price and a decrease in availability by the end of 2015. From 2010 to 2015, the average monthly rent for a two-bedroom apartment in the Twin Cities metro area increased by 16 percent to $1,055, a monthly rent that is only affordable to people making at least $42,204/yr. Even if renters can afford the median priced apartment, they will likely have difficulty finding one. In 2015, the vacancy rate for apartments that cost $1,000 or less a month dropped below 2 percent in the Twin Cities. 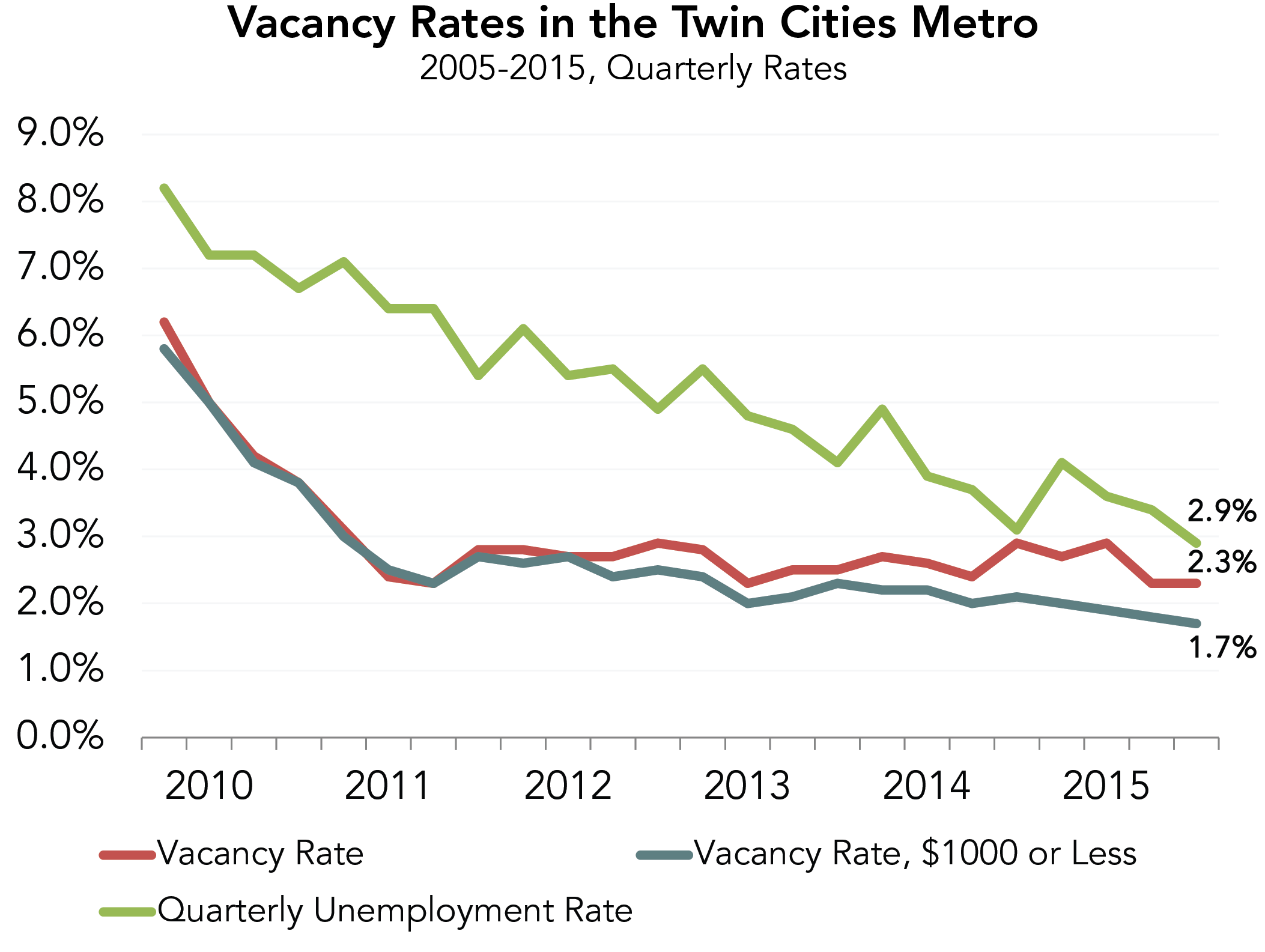 While housing costs are increasing, both renters and homeowners are experiencing greater housing stability in 2015. Evictions dropped by 6% to 18,280 across the state and the owners market saw only 7,212 foreclosures—the lowest number in a single year since 2005. All Minnesota counties saw decreases in foreclosure rates from 2014 to 2015, and for the second year in a row no county experienced a foreclosure rate higher than 1%.

The home construction industry is making a dramatic comeback, with sale prices rising steadily in large metro areas since 2010. In 2015, the number of closed sales and new residential building permits issued reached a 10-year high in the Twin Cities, St. Cloud, and Brainerd metro areas.  Although most permits were issued to build single-family homes (12,616 permits), more permits for multi-unit buildings are being issued now than ever before. MHP found that 42.3% of all units permitted in 2015 were for duplexes, townhomes, or apartment buildings, the highest percentage since data collection began in 1995. 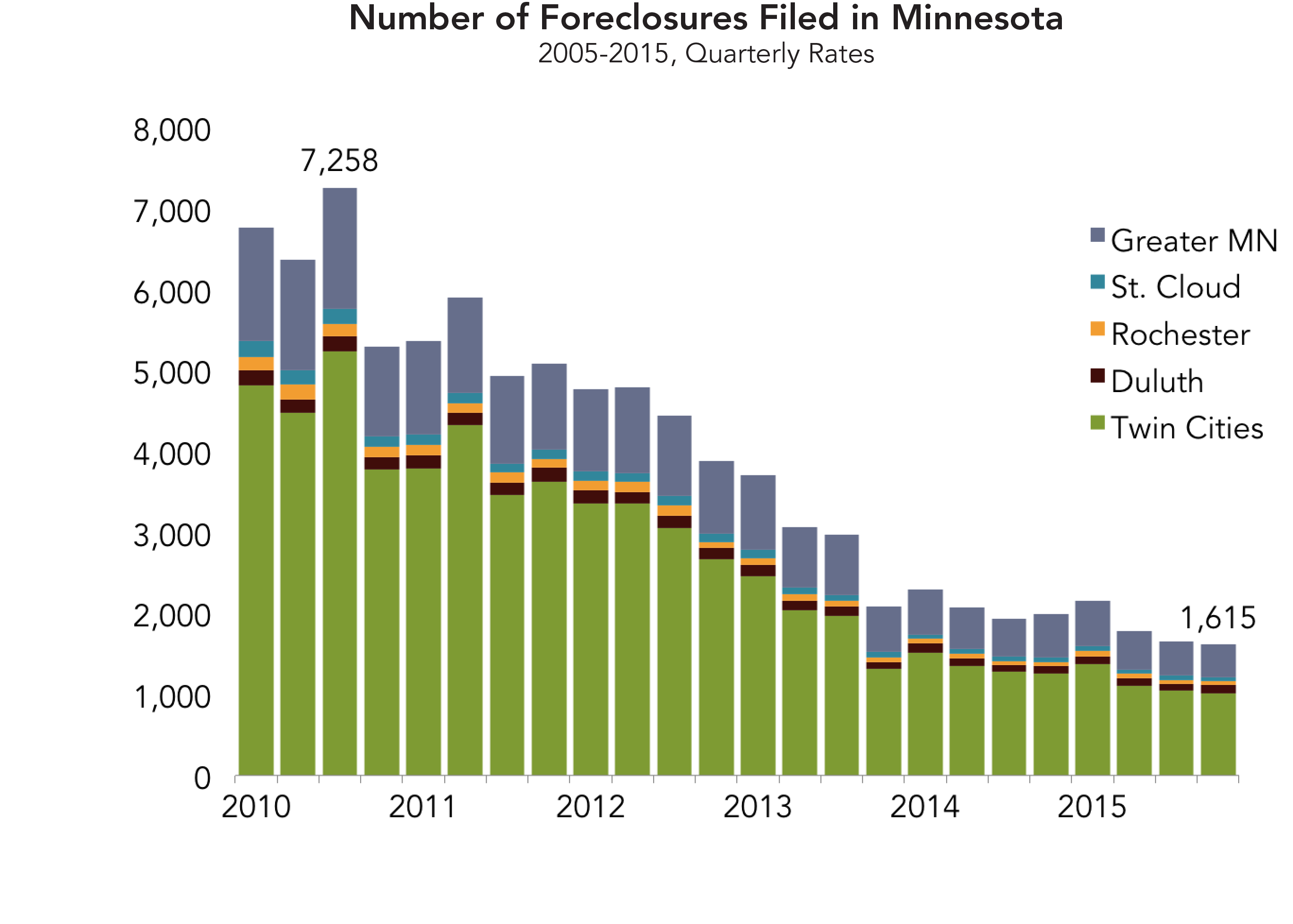 Declining Rates of Homelessness Are Not Enough

For more information or to inquire about this report, please contact Atticus Jaramillo at 651-649-1710 or This email address is being protected from spambots. You need JavaScript enabled to view it..

Written by Erin Olson, This email address is being protected from spambots. You need JavaScript enabled to view it.