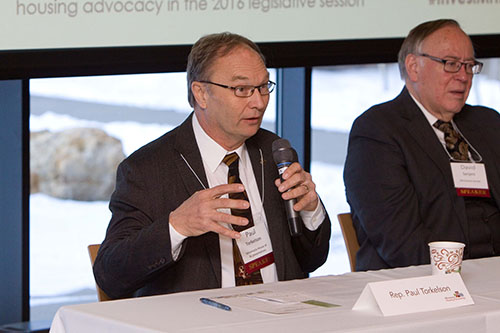 For the wonks who closely follow the comings and goings of the Minnesota state legislature, March 8—the first day of the 2016 legislative session—is a red-letter day.* But for those who work hard building, financing, and operating affordable housing around the state, it’s all too easy to be buried in day-to-day work and miss the action at the legislature altogether.

That’s why more than 100 housing industry leaders gathered on February 9 to prepare for engagement in state policy making. Attendees at MHP’s recent Investors Council breakfast, “Take it to the Steps,” left with a clear understanding that the upcoming legislative process is absolutely critical to ensuring that the state can continue to make progress on providing safe, decent housing to every resident. In 2016, the opportunity is large: The Homes 4 All coalition, which includes MHP, is advocating for $130 million in new bonding for affordable housing statewide; Governor Dayton’s office has proposed $90 million in his initial bonding budget.

In her opening remarks, Minnesota Housing Commissioner Mary Tingerthal touched on the impact of the 2014 bonding bill to emphasize the importance of passing a similar bill in 2016. Not only were new units created, but additional opportunities were created across the housing spectrum as former renters accessed downpayment assistance to become homeowners, which in turn freed up more rental units for others.

Torkelson, who chairs the House bonding committee, which will consider Housing Infrastructure Bond and General Obligation Bond requests for housing this year, started by offering a broad perspective on statewide investment needs. He emphasized the importance of maintaining the state’s existing infrastructure (especially in transportation and water), and to look at housing and other infrastructure investments as a statewide issue. 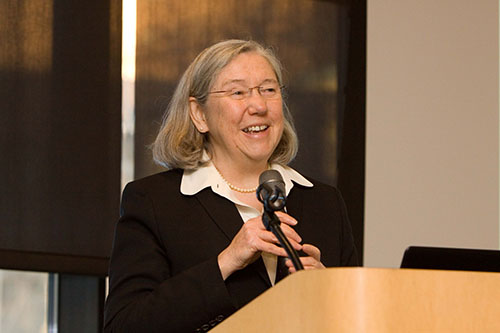 Hausman, the ranking member and past chair of the same committee as Torkelson now presides over, highlighted the importance of a proposed request for senior housing, noting that there is and will continue to be a growing need throughout the state. Hausman also provided context for the size of the 2016 bonding bill, noting that while there can be a “psychological reaction” to the idea of a bill larger than $1 billion, in historical perspective a $2 billion bill would be appropriate.

Senjem noted the strides that have been made over the years towards the goal of providing affordable housing, and observed the great need for workforce housing for his constituents in Rochester. He observed that people generally are moving toward regional centers where there are economic opportunities, but not necessarily plentiful housing opportunities.

In the open question and answer session that followed the panelists’ remarks, several audience members asked questions around the theme of how to best engage lawmakers. Representative Torkelson commented that both lobbyists and those working in the housing community are important in this regard. Senator Senjem added that not all activity has to happen at the capitol, emphasizing the significance of keeping in touch with legislators in their home districts. Representative Hausman noted the importance of both professional expertise and constituent testimony.

If you are interested in learning more about how to engage with MHP and its partners at the capitol this year, sign up for Action Alert updates and get in touch with Libby Murphy.

*Some may know that it’s also International Women’s Day.