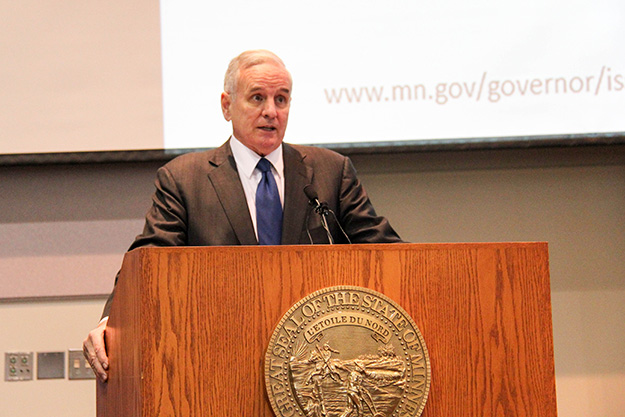 Governor Dayton’s $1.4 billion bonding request is the largest capital investment package ever proposed in Minnesota. The proposed bill would finance numerous public works projects throughout the state. And, according to estimates from the governor’s office, create 39,000 jobs. The bill "will strengthen our communities and improve the lives of Minnesotans," says Lt. Governor Tina Smith. Notably, $90 million of this request is earmarked for affordable housing.

The Governor’s bonding package includes a request for $70 million for Housing Infrastructure (HIB) and $20 million for General Obligation (GO) Bonds for housing. GO bonds can be used to rehabilitate public housing. HIB bonds can be used to finance several types of projects including new construction or rehabilitation of supportive housing and preservation of existing federally subsidized rental housing. More than half of Minnesota’s 87 counties have received bond funding to build or preserve low-income housing.

MHP, the Metropolitan Consortium of Community Developers, and Minnesota Community Action Partnership's pipeline research suggests that, right now, 251 developments, totaling an estimated cost of $1.5 billion, await an influx of funds to break ground. A total of 9,153 units, 8,118 of which are designated affordable will require some combination of local, state or federal funding.  Homes for All’s bonding request would help fund a fraction of developments in the pipeline. This year’s Homes for All request aims to an estimated 4,100 low-income households around the state. The $70 million in HIB would help generate roughly 1,700 units and the $20 million GO bond request would help preserve 2,400 units.

According to the governor's office, the $1.4 billion proposal would fund projects throughout the state, with a breakdown of 35 percent in Greater Minnesota, 35 percent in the Twin Cities metro area, and 30 percent to projects with a statewide impact. The request is estimated to leverage $600 million in private investment and local and federal dollars. The Governor's request would significantly invest in projects that support economic development in regional centers statewide, water infrastructure to deliver clean water and restore water quality to the state's lakes and rivers, improve rail safety, and higher education and job training to prepare Minnesotans for the future.

Notably, the bill does not include any proposals for transportation projects. Governor Dayton has stated that he believes there should be a separate bill to cover transportation development and infrastructural improvements. This exclusion was condemned by House Majority Leader Joyce Peppin.

The House and Senate will review and vote on the bill after the legislative session reconvenes March 8, 2016.