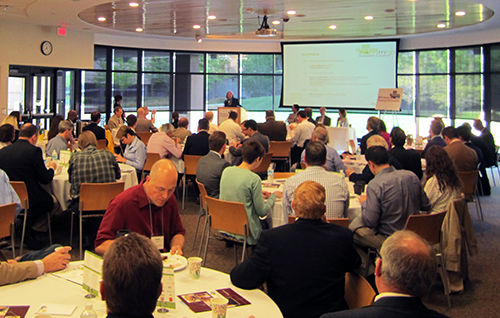 Renewable energy, especially solar, is of great interest to affordable housing developers from both a financial sustainability and mission perspective. However, effective practices and financing systems are still emerging in Minnesota.

In May, the MHP Investors Council hosted a breakfast discussion focusing on alternative energy sources for affordable housing. Minnesota Housing Commissioner Mary Tingerthal moderated a thoughtful discussion about current projects, challenges in implementation, and the future of alternative energy in multifamily housing on both a statewide and national level. Panelists included Michael Bodaken from National Housing Trust, Gina Ciganik from Aeon, and Vihar Sheth from US Bancorp Community Development Corporation. More than 80 additional leaders representing the Investors Council and its guests, from all sectors of the affordable housing industry, participated in the event.

Michael Bodaken discussed the topic from both a national policy and on-the-ground practice perspective: As part of the Energy Efficiency for All coalition, he works with utilities to implement energy efficiency programs and improve energy investments in affordable housing. The opportunity is massive: By 2025, the coalition projects that utilities will spend $15.6 billion each year in energy efficiency investments in buildings (up from $7.2 billion in 2011). The National Housing Trust has made investments totaling $2.5 million in solar thermal and photovoltaic systems for six properties in its multifamily affordable housing portfolio; in the next five years alone, this is projected to save $1.2 million and prevent the release of 330 metric tons of greenhouse gases. Bodaken also noted that alternative energy is one of the biggest opportunities developers have to reduce costs and carbon output. The largest controllable variable operating cost in affordable housing is the cost of energy and utilities.  Reducing these costs through retrofits or the use of less costly renewables helps keep housing affordable over a longer period of time.

Gina Ciganik gave context for the challenges of using alternative energy in Minnesota. On average, Minneapolis has a 130º swing in temperatures between summer and winter—greater than most other metropolitan areas in the U.S. Our systems are strained through sub-zero temperatures, snow, heat, and humidity. This extreme climate variation means that Minnesota housing developers may not be able to adopt models from projects located in milder climates. 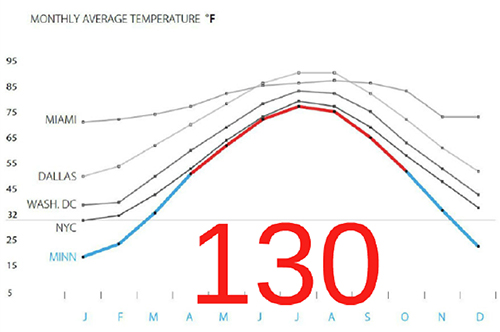 Ciganik emphasized that before considering photovoltaic (PV) or other renewable energy strategies, the first order of business is to create buildings that significantly conserve energy, and water.  Solar and other clean energy strategies are less effective in poorly designed buildings with high energy use intensities (EUI).

Vihar Sheth provided an investor’s perspective on the data needed to make the case to tax credit investors to underwrite renewable energy investments. In part, the challenge is in underwriting savings that accrue directly to tenants, rather than to owners. One innovative approach Sheth noted is to incorporate energy costs into rent (with no net effect on residents’ pocketbooks) so that the savings can be more directly underwritten at the project level and incorporated into lower cost projections for the building.

Ciganik's comments were grounded in Aeon's experience attempting, with partner Hope Community, to achieve net zero energy at their upcoming “The Rose” project at Franklin Avenue and Portland Avenue in Minneapolis.  The Rose is designed to be incredibly energy efficient—operating at just 20-30% of the regional average baseline for energy usage—and to use renewable sources as much as possible for the energy it does consume. After exploring a number of other options for incorporating renewable energy in the project, the developers are now pursuing a Community Solar Garden through a partnership with consulting group Eutectics.

Ciganik also noted that resident engagement is critical in energy efficiency. Developments can be LEED certified and use alternative energy, but if tenants do not engage in sustainable practices, developments can still consume a lot of energy and may not reach efficiency goals. Energy efficiency can also be a selling point to residents and contribute to a sense of pride and community.

Sheth said that states with the most alternative energy in housing right now have tax credits or some form of stable funding program in place. The panelists agreed that Minnesota’s current lottery system for solar incentives was not workable with affordable housing programs; community solar gardens provide a more predictable resource and seem to have more potential for serving this need.

In the open discussion that followed the panelists’ comments, many audience members had good news to share. Dominium highlighted its use of hydropower at its new Pillsbury A-Mill development, the St. Paul Public Housing Authority shared the news that its community solar garden initiative for high-rise properties is projected to save over $4 million for the agency, and Northcountry Cooperative Foundation is hoping to implement community solar to reduce costs for resident-owned manufactured home park cooperatives.

To learn more about the MHP Investors Council, and the conversation described here, visit http://mhponline.org/about/investors-council/events