Thanks to a new, Minnesota study on the demand for senior affordable housing released in November, we can dig deeper and examine the more specific affordable housing needs of Minnesota’s seniors*. Already, 1 in 5 Minnesota counties have populations where more than 40% of residents are age 55 or older, and the number of seniors statewide is expected to increase nearly 40% by 2030. The study, commissioned by a group of housing authorities and developers, highlights four major findings facing Minnesota in the next 15 years, and provides a foundation for housing policy proposals currently being discussed at the Capitol.

1. Minnesota will experience a dramatic increase in senior headed households

In 2015, it is estimated that there will be 1.57 million people aged 55 and up in the state of Minnesota, approximately 28% of the state’s total population. By 2030, this number will increase to an estimated 2.18 million Minnesotans.

Some communities are already “feeling their age.” About a quarter of the population is age 55 and up in Hennepin and Ramsey counties. But in 19 counties, mainly in Greater MN, populations are more than 40% older adults. For instance, Aitkin County has the highest proportion of seniors with 52% of their population being older than 55. The need to house and care for these aging Minnesotans is already being felt.

2. The demand for affordable, housing for older adults will not be met given current production

Over the next 5 years, a 54% increase in the demand for affordable, age-restricted housing is expected, approximately 8,000 units. The high demand for affordable, age-restricted housing mostly stems from the fact that seniors are living on reduced and fixed incomes. Currently, 30% of people age 65 and older in Minnesota live solely on Social Security. 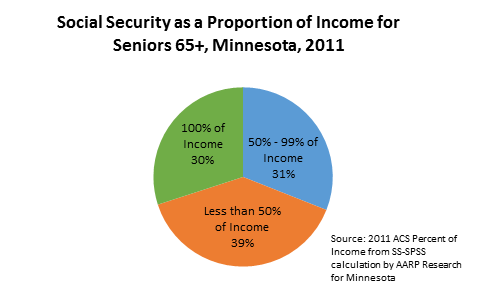 However, the need for affordable senior housing is not likely to be met. Over the next five years, the number of senior households with restricted incomes of will grow by nearly 47% while the number of assisted units to house them will increase only 1%, the study finds.

3. Seniors are the fastest growing segment of the state’s homeless population

According to the Wilder homelessness study from 2012, seniors are the fastest growing segment of the homeless population. Between 2009 and 2012, the number of homeless seniors on a given night increased 48%. This uptick in senior homelessness represents new instances of homelessness; about half of study respondents were not homeless before age 50. Males, African Americans, and military veterans are overrepresented in the senior homeless population. Major health concerns are extremely common; 69% of homeless seniors reported chronic health problems (high blood pressure, diabetes, chronic lung ailments, etc.) and 41% reported chronic or persistent mental illness.

While some older adults express a desire to “age in place,” or live in their current housing situation, most seniors will likely move into rental units as they age. Driven in part by the aging of the population, homeownership rates are likely to decrease through 2040. In 2010, Minnesota’s homeownership rate was 73%. By 2030 the rate is projected to decrease to 70%. While the majority of Minnesotans will still own homes, renters and rental housing will become a larger proportion of the state’s demographic.

However, there are factors that may limit this shift. The lack of affordable housing options for seniors may lead many to stay in their current home despite a desire to move. Also, the general rental market is tight with low vacancy rates throughout the Metro Area, making it difficult to find even market rate rental units. Likewise, high housing production costs statewide limit the number of new developments.

This study also provides an information foundation for housing policy and advocacy. Currently at the Capitol, MN NAHRO is proposing a new state funding source to help address affordable housing needs for seniors. The proposal, titled “Serving our Seniors,” would build up to 400 units of affordable senior housing that incorporate the delivery of support services to help seniors live independently as long as possible. The new gap financing tool would use housing infrastructure bonds dedicated to the development of affordable senior housing. For more details and to help in this effort, visit Minnesota NAHRO's website.