Last month, the US Census Bureau released data from the 2013 American Community Survey, the best regular source of housing data available for Minnesota. MHP staff sifted through the data, looking to discern what changed and what remained the same for housing in Minnesota. The data suggest a few slight improvements between 2012 and 2013,* but longer term trends are sobering. In 2013, conditions remained difficult for renters, and lower-income renters in particular. Housing disparities for owners, among the worst in the nation, also persisted.

The analysis below gives more detail for understanding the latest in housing data for Minnesota.

When families pay too much of their income for housing, they often face difficult choices between paying for housing, food, or other basic needs. This is especially an issue for lower income households, who have far less financial cushion to begin with.

Unfortunately, the ACS data showed that cost burden (the percentage of households paying 30% or more of their income on housing) remained very high in Minnesota, affecting 590,000 households. Cost burden decreased slightly between 2012 and 2013, but only for owners was the drop significant statistically.

Severe cost burden (the percentage paying HALF or more of their income on housing), on the other hand, did not change. This indicates no relief for the families struggling the most. 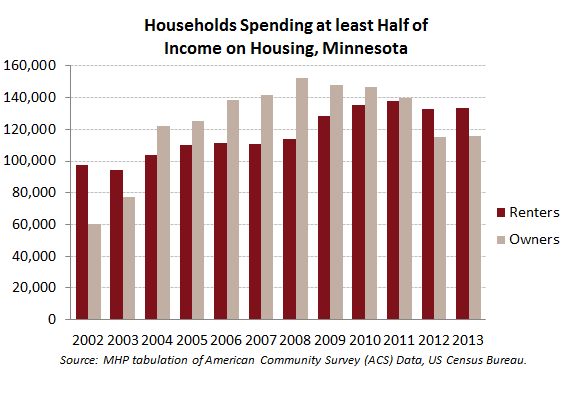 Breaking out homeowners from renters helps us understand more about important trends for both groups. Homeownership rates stayed steady between 2012 and 2013, the data show, with somewhere between 71% and 72% of the state's households owning a home. This is roughly the rate that existed for decades before the housing boom in the 2000s.

Two additional points of note are around disparities in Minnesota's homeownership.

Many renters remain vulnerable, the data also suggest. The median renter household income was only $32,348 annually, less than half of the median income for owners of $73,859. While median incomes for renters rose slightly from 2012 to 2013, these small income gains dwarf losses over a longer time frame. Since 2000, after adjusting for inflation, median renter incomes fell by 13% even as rents rose. 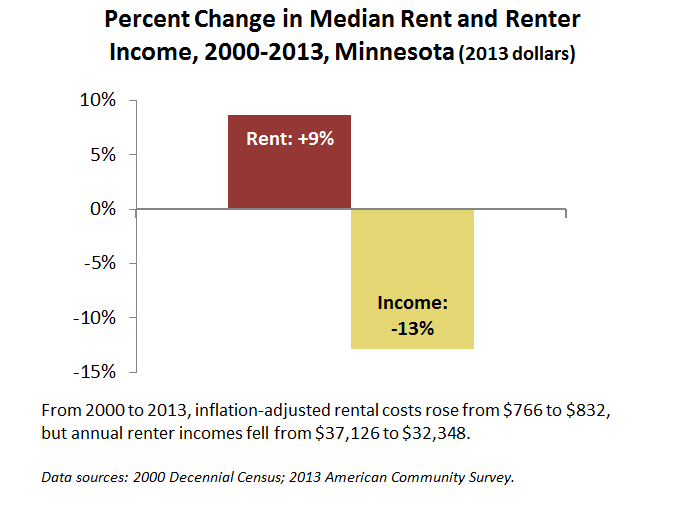 Looking at changes from 2012 to 2013, there appeared to be a shift in the composition of the renter population toward higher income households.

Overall, cost burden among renters decreased slightly. However, looking within income brackets of above $50,000 and below $50,000, it appears that at both income levels, cost burden increased, the chart below shows. 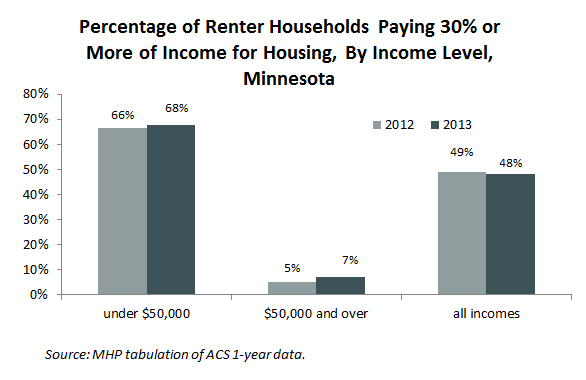 This seeming contradiction in overall cost burden going down, while cost burden within the income levels rising, is because between 2012 and 2013, there were fewer renter households earning under $50,000, and more earning over $50,000. Higher income people are far less likely to be cost burdened, which pushed overall cost burden down. The number of cost-burdened renters earning $50,000 or more increased from about 8,700 to 13,000; and the number of cost-burdened renters earning below $50,000 decreased from 272,000 to 265,000.

While rising incomes for existing renters in the improving economy was a likely contributor to the increase in the ranks of higher income renters, there might also be a set of wealthier renters moving from owning to renting. It's not possible to say with certainty given the margins of error, but it's worth noting that from 2012 to 2013, the only age group with notable growth in the number of renters was aged 65 and older. This group may include retirees opting to rent after selling a home. (Gains in older renters were largely offset by decreases in the ranks of renters under the age of 35 possibly moving into home ownership.) A drop in cost burden among older renters, though within the margin of error, makes older, wealthier renters a trend to watch over time.

MHP will continue to look for data trends to help us know what to anticipate for housing and how the housing needs of lower income Minnesotans can best be met in the coming years.

For more charts and results for Minnesota and the metro areas of the Twin Cities, Duluth, Rochester, and St. Cloud from the 2013 ACS, please check our Housing Trends.

Contact Leigh Rosenberg for more information about housing data at This email address is being protected from spambots. You need JavaScript enabled to view it. or leave a public comment below.

*A note on the ACS: The American Community Survey collects population and housing data to provide updated pictures of the population each year. Released in 1, 3, and 5 year estimates, it is the best source we have for housing data, although the 1-year data is limited to more populated geographies, such as larger metros and the state as a whole. Many changes in a single year (from 2012 to 2013) tend to be within the margins of error, meaning the changes may be related to the survey sample. Nevertheless, the data are useful for alerting us to possible trends over time.