Thousands to Benefit from Better Housing After Funding Awarded

Last week, Minnesota Housing Finance Agency awarded $162 million for housing development, which will touch 4,000 Minnesota households. Each will benefit from rehab or new construction of a safe, secure place to call home. This award package gives us many reasons to celebrate, both for the people who will benefit and for all the advocates and legislators who championed Homes for All to make a bigger pie.

We also want to take stock of our work ahead -- for every dollar awarded there were almost two dollars' worth of requests that were left unfunded.

Read on for background and analysis of the awards to help inform our work going forward.

A round of thanks

We can all celebrate the work of over 100 organizations in the Homes for All alliance, of which MHP has been a proud member. Without Homes for All, the funding awards would likely have been smaller. From school superintendents to architects to social workers to dedicated legislative suppporters from both sides of the aisle, support for Homes for All has been broad. On Oct. 23, Governor Dayton, Rep. Alice Hausman, and Sen. Stumpf, 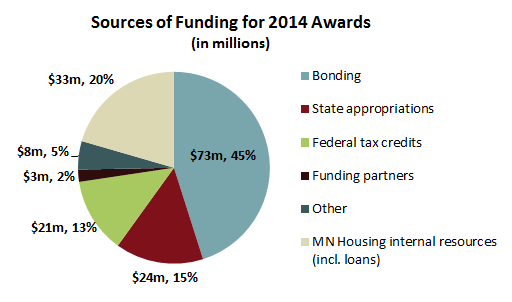 mhfa 2014 awardsalong with affordable housing developers, spoke to the tremendous achievement for housing during this year's legislative session.

The $162 million in awards came from a combination of state and federal resources, broken out in the pie chart to the left.

Most importantly, $73 million of the awards, nearly half, were a result of the 2014 bonding bill. During the 2014 legislature Homes for All championed and won $100 million* in bonding, Minnesota's largest bonding award for housing to date. Another large portion came from state appropriations. In 2013, Homes for All played a role in increasing funding appropriations for housing by $33 million over the next two years.

The funding committed for affordable housing, in combination with dollars that will be leveraged, is expected to total $500 million, or a half a billion dollars.

What the awards will do

The vast majority of the funds (about 94%) will go to multi-family rental developments, but the number of awards was more evenly split, as the table below shows.

The dollars will go towards needed housing improvement or preservation of existing affordable housing. Aside from "critical rental needs," other priorities included:

In terms of making a dent in the need, it's also worth noting that only units that didn't exist before (i.e. new construction) will expand the number of families affordably housed. In total, the funding will produce 1,556 new units.

Where the awards will go

Greater MN vs. the 7-County Metro. Overall, about a quarter of the units funded will be in Greater Minnesota, though about 35% of the dollars will go to housing outside of the metro area.

Cities vs. suburbs. In addition, we took a look at new construction in the metro area on its own, given public controversy around funding of affordable housing in the suburbs versus central cities:

For rehab of existing housing, as might be expected, the lion's share of resources went to the central cities, especially for multi-family units.

Finally, with all that there is to celebrate, the awards are also a clear reminder of the work before us.

For every dollar awarded, almost two dollars' worth of requests were denied. $286 million in proposals were left unfunded. That is, the state would have the capacity to do more, if the money were available.

Even with the new units funded, hundreds of thousands of Minnesota households will still pay more than 30% of their income for housing, which, as we know, can force families on a budget to skimp on basic needs like food or medications, or risk losing their housing.

During the 2015 legislative session, Homes for All will again seek much-needed investment to protect people from homelessness and promote stable housing and communities. Our alliance hopes to put another dent in the need in the coming year.

*Of the remaining $27 million in bonding, $20 million for public housing rehab will awarded in a separate process.